Q.1. What do you mean by colour code of carbon resistance ?

Q.2. A given wire is stretched to reduce its diameter to half its previous value. What will be its new resistance ?

Ans ⇒ Let D be the original diameter of the wire,then diar
New area of the wire is given by 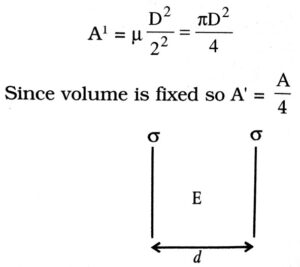 if area is decreased to one fourth then wire can be stretched 4 times.
Now, new resistance,

New resistance will be sixteen times the original resistance.

Q.3. Define the terms resistivity, conductivity and state their SI unit. Draw a graph showing the variation of resistivity with temperature for a typical semiconductor.

Ans ⇒ Resistivity : The resistance of a material of a conductor of unit length and unit area of cross section.
SI unit : Wm
Conductivity : The reciprocal of resistivity of the material, It is presented by SI Unit: Ohm-1 m-1 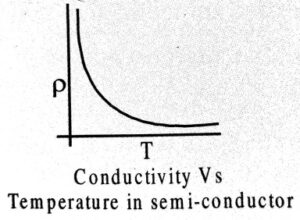 Q.4. State the principle of potentiometer. Draw a circuit diagram used to compare the e.m.f. of two primary cells.

Ans ⇒ Principle : If a constant current is passed through a wire of uniform area of cross section, the potential drop across any portion of the wire is directly proportional to the length of the portion. Mathe matically, V α I

Formula used : If E1 and E2 represent the EMF of the cells and I1 and l2 represent the lengths from position A, at which the null point is achieved, then 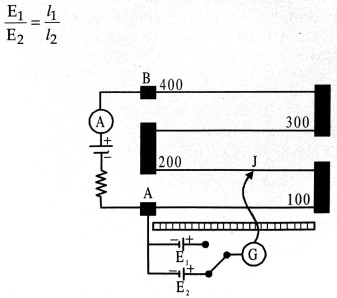 Q.5. Draw the graphs showing variation of inductive reactance and capacitive reactance with frequency of applied AC source, Can the voltage drop across the inductor or the capacitor in a series LCR circuit be greater than the applied voltage of the AC source ?

Q.6. Write the principle of potentiometer. The variation of potential difference V with length in the case of two potentiometers x and y is shown in figure. Which one of these two will you prefer for comparing emfs of two cells and why?

Ans ⇒ Let e be the emf of each cell and E the emf of the battery, then as shown in circuit diagram (Fig) 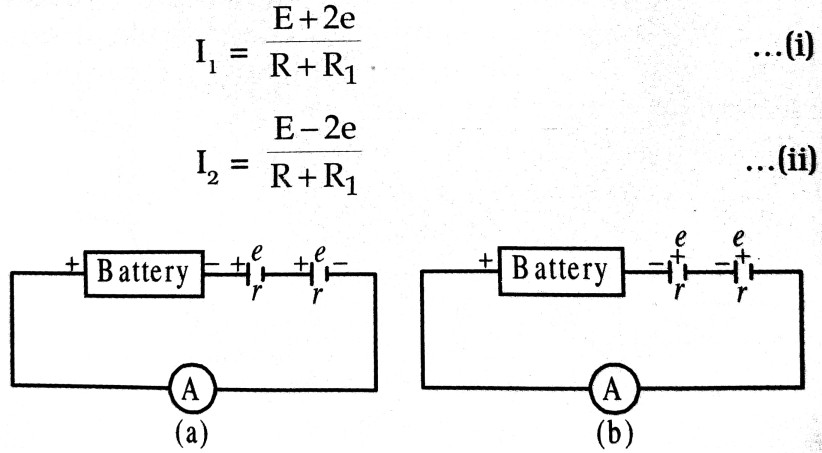 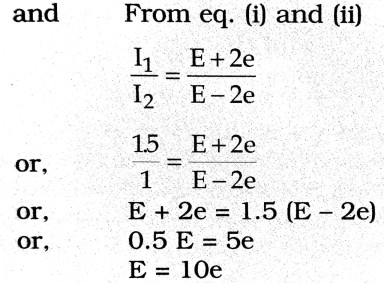 The emf of the battery is equivalent to the emf of 10 cells, that is, one cell is wrongly connected.

Q.8. Write the mathematical relation between mobility and drift velocity of charge carriers in a conductor. Name the mobile charge carriers responsible for conduction of electric current in (i) an electrolyte (ii) an ionized gas.

Q.9. You are given n resistors each of resistance r. These are first connected to get minimum possible resistance. In the second case these are again connected differently to get maximum positive resistance, Compute the ratio between the minimum and maximum value of resistance so obtained.

Q.10. Draw V-I graph for ohmic and non-ohmic materials, Give one example for each.

Q.11. How does the resistivity of (i) a conductor and (ii) a semiconductor vary with temperature ? Give reason for each case.

Ans ⇒ (i) Resistivity, ρ = m/ne2τ
On increasing temperature collision of free electrons with ions/atoms increases. Thus, relaxation time decreases. According to the relation resistivity increases with increase in temperature.
As ‘n’ does not change appreciably it will not affect resistivity.

(ii) In semiconductors charge in number density of free electrons (n) is sufficient to decrease the resistivity. As ‘n’ was low initially collision do not increases appreciably. Hence relaxation time does not affect much.

Q.12. Establish a relation between current and drift velocity.

Ans ⇒ Consider a conductor ‘1’ and area of cross section ‘A’. If ‘n’ is number density of free electrons, then total charge on all the free electrons in the conductor is Q = Al ne on applying a constant potential difference V across the conductor an electric field is set up.
E= V/I

This electric field makes the charges move. Electrons begin to move with drift velocity V. in a direction oppositve to that of the field. Time taken by free electrons to cross the conductor is

Q.13. What is terminal potential difference of a cell ? Can its value be greater than the e.m.f. of a cell ? Explain.

Ans ⇒ Current density of a metallic conductor is defined as the amount of current flowing per unit area of the conductor around that point provided the area is held in a direction normal to the current.
We know, I = ne Avd. 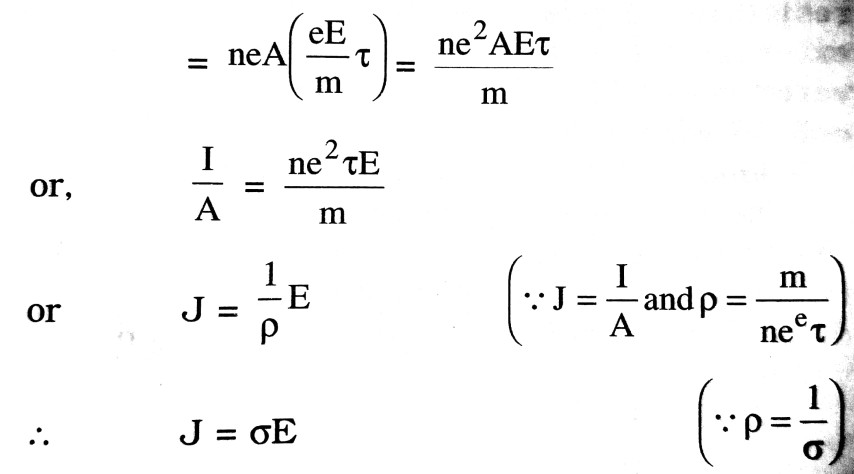 Q.15. What are thermistors ? Explain its use in brief.

Ans ⇒ Thermistor is a heat sensitive device whose resistivity changes very rapidly with change of temperature. The temperature coefficient of resistivity of a thermistor is very high, which may be positive or negative. A thermistor can have a resistance in the range of 0.1 Ω. to 107 Ω Thermistors are used (i) to detect small temperature changed (ii) to safe guard the filament of picture tube of a television set against the variation of current (iii) in temperature control units of industry (iv) for voltage stabilisation and remote sensing.

Q.16. Under the conditions will the strength of current in a wire be the same for connection in series and in parallel of n identical cells ?

Ans ⇒ When n cells are connected in series;

Q.17. If the length of the wire be (i) doubled and (ii) halved, what will be the effect on the position of zero deflection in a potentiometer ? Explain.

Ans ⇒ (i) When length of the wire is doubled. The potential gradient across the potentiometer wire will decrease. Due to which the position of zero deflection will occur at longer length.
(ii) The reverse will be the case at first. 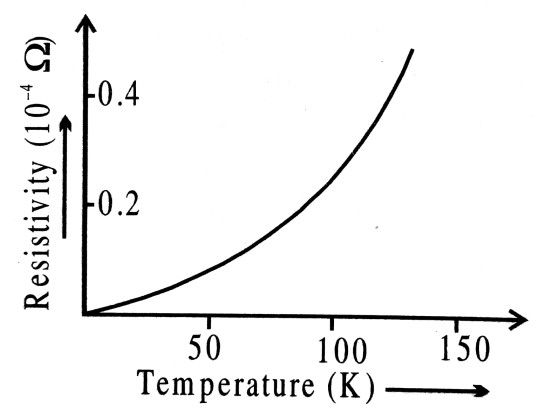 The Fig. shows the variation of resistivity of copper with temperature.

Q.19. How can you make a potentiometer of a given length more sensitive by using a resistance box ?

Ans ⇒ Electrical resistivity of a material of conductor is the resistance offered by unit length and unit area of cross-section of a wire of the material. Its S.I. unit is Ωm.
The drift velocity of free electrons in a conductor is 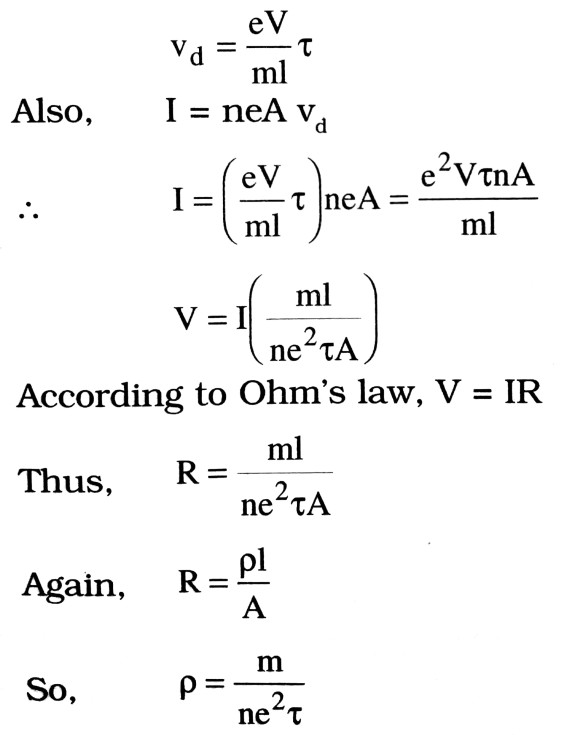 Q.21. A toaster produces more heat than a light bulb when they are connected in parallel. Which has the greater resistance ?

Ans ⇒ Since the toaster and the light bulb are connected in parallel, the potential difference cross each is the same (say V).

Thus the resistance of lamp (R2) is greater than that of a toaster (R1).

…(ii)
where e = charge of electron and τ is relaxation time.

Q.23. Explain that second law of Kirchoff is the law of conservation of energy.