Q.1. What do you mean by saying that electrostatic field in conservative in nature ?

Ans ⇒ An electric field is said to be conservative if :

Q.2. What are properties of equipotential surfaces ?

Ans ⇒ Following are the properties of equipotential surfaces :

Ans ⇒ It is defined as the process of stretching of dielectric atoms due to the displacement of charges in the atoms under the action of applied electric field. This stretching of atoms continues till the restoring force becomes just equal and opposite to the force exerted by the applied electric field on the charges. Thus C.G. of +ve nucleus does not coincide with the C.G. of electrons that are – vely charged due to this stretching and the atom thus acquires a dipole moment.

Let a dielectric slab of thickness t be put between the plates such that t < d. Due to polarisation, electric field will reduce from E0 to E.

Potential difference across the capacitor is given by 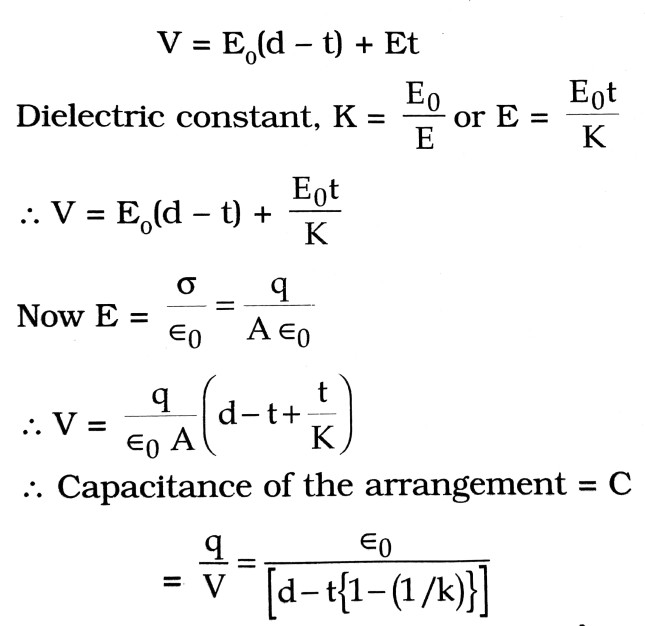 Ans ⇒ Electrostatic potential at any point is the amount of work done in bringing a unit positive charge from infinity to that point.
At any far off point lying on the axial line of a dipole

Q.6. Briefly explain the principle of a capacitor. Obtain the expression for the capacitance of a parallel plate capacitor.

Ans ⇒ A capacitor works on the principle that the capacitance of a conductor increases when an earthed corrected conductor is placed near it.
A parallel plate capacitor consists of two (large) parallel conducting plates, separated by a (small) distance (Fig.). The two plates of the capacitor have equal but opposite charge densities of magnitude δ. The electric field at any point between the plates is E
= δ/ε0.

Let d be the distance between the plates. A be the area of each plate and Q be the magnitude of 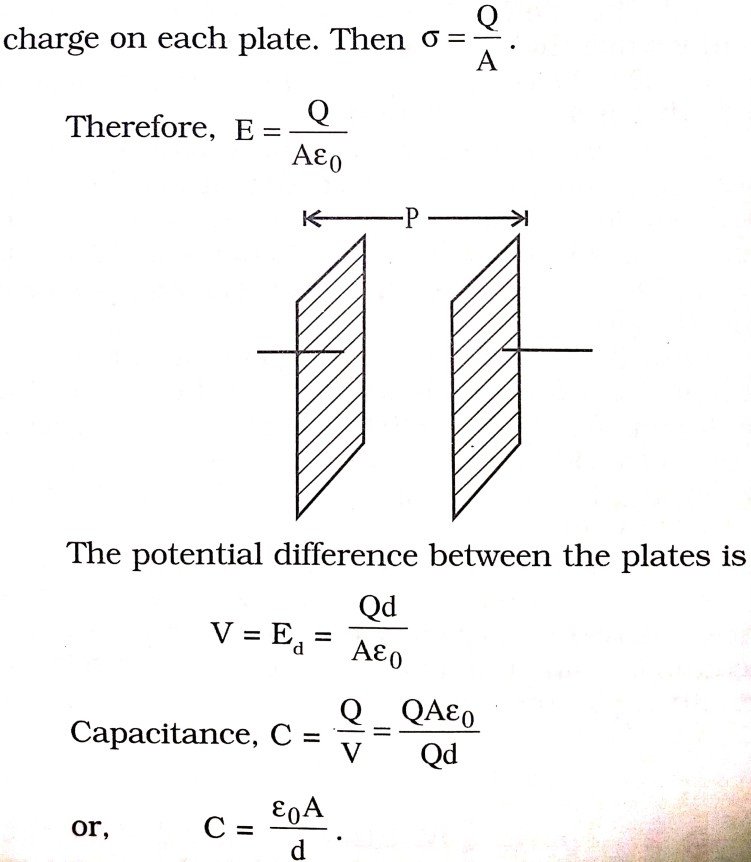 Q.7. Two charged conducting spheres of radii a and b are connected to each other by a wire. What is the ratio of electric fields at the surfaces of the two spheres ? Use the result obtained to explain why charge density on the sharp and pointed ends of a conductor is higher than on its flattened portions.

Q.8. What are the differences between conductor and dielectrics ?

(iii) The dielectric constant of conductors is infinity while that of dielectric is finite.

(iv) The dielectric strength of conductors is zero while that a dielectric is finite.

(v) There is no limit to the current that a conductor can carry, provided that it can be keep cool enough. However, there is a limit to the electric flux that a dielectric will carry without breaking down.

Q.10. Applying Biot Savart’s law deduce the expression for the magnetic field at the centre of a semicircular wire loop of andius R carrying a current I.