Q.2. Define the following:
(a) Mass defect
(b) Binding energy per nucleon
(c) Packing fraction of a nucleus.

Ans ⇒ (a) Mass defect : It is defined as the difference between the sum of the masses of nucleons constituting a nucleus and the rest mass of the nucleus.

(b) Binding energy per nucleon : It is defined as the average energy required to extract one nucleon from the nucleus.

(c) Packing fraction of a nucleus : It is defined as the mass defect per nucleon of the nucleus.

Q.3. What holds the nucleons together in a nucleus ?

Q.4. How the stability of a nucleus is decided ?

Ans ⇒ It is defined as the substance whose atoms have unstable nuclei and emit ∝, β and γ-rays.

Ans ⇒ Nuclear reactor : It is defined as a device in which nuclear chain reaction takes place in a controlled way.
Its main components are :
(a) Nuclear fuel
(b) Moderator
(c) Control rods or Cadmium rods
(d) Coolant
(e) Protective shield.

Q.8. What is the relationship between Half life and Decay constant ? Define mass defect.

Ans ⇒ From relation N = N0e-λt (From law of radioactivity)
we get, 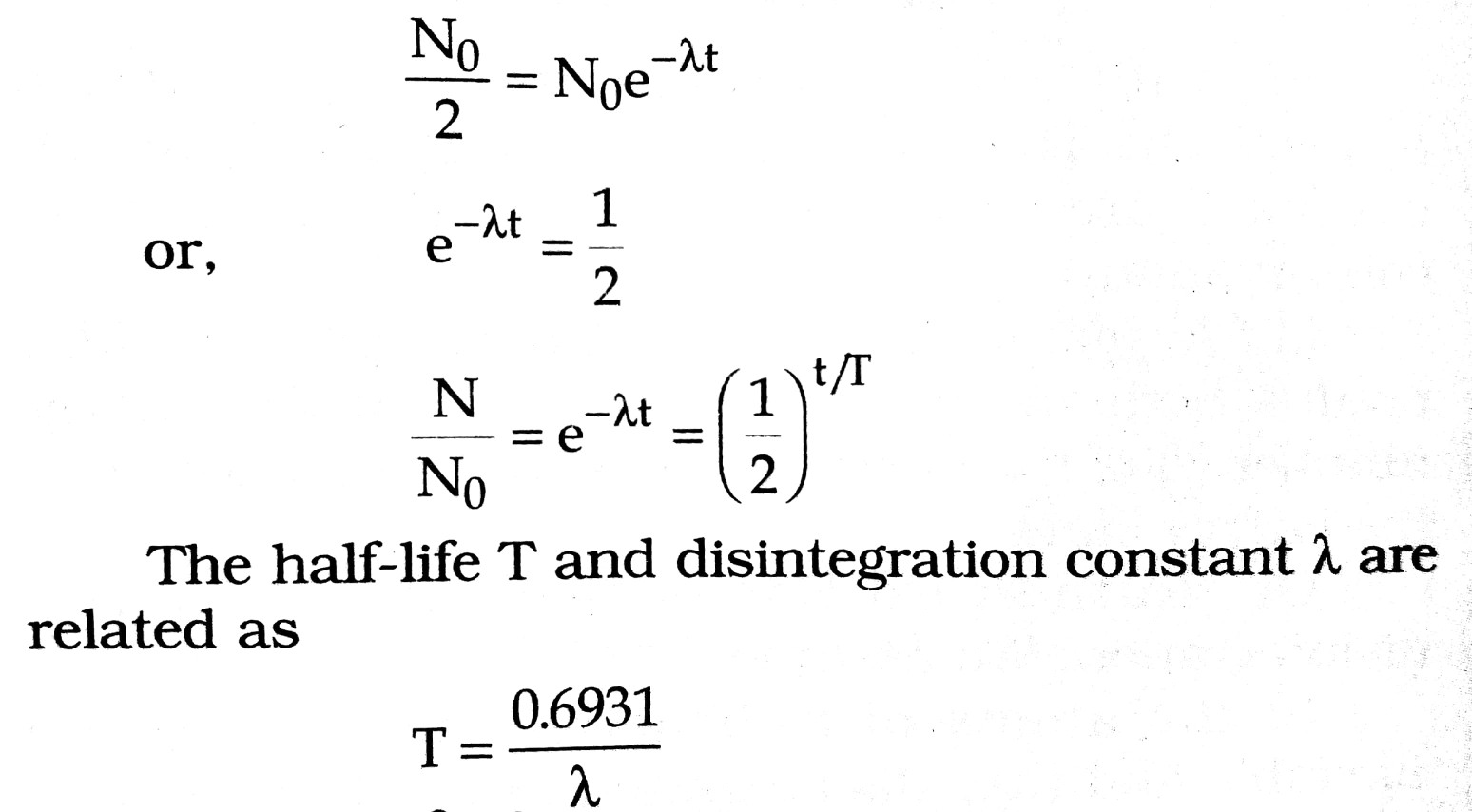 Q.9. Explain the term distance of closest approach and deduce the expression for it.

Q.10. Give an account of the laws of radio activity.

Ans ⇒ Wheather the radioactivity is natural or artificial, it obeys the following laws :

(i) Soddy-Fajan’s displacement law : When a nucleus (X) emits an ∝-particle, the product (daughter) nucleus (Y) is displaced on the periodic table down by mass number 4 and by atomic number (charge number) 2.

(ii) β-(electron) or β+ (positron) : The product nucleus gets displaced up or down respectively by atomic number one without any displacement on the mass scale.

η* and η are antineutrino and neutrino respectively. These are of zero charge and zero rest mass and are introduced to ensure the momentum conservation.

(iii) A γ(gamma) photon : The daughter nucleus retains both the mass number (A) and the charge number (2) of the parent nucleus but gets lowered in the energy state.

Or, Rutherford-Soddy laws of radioactive disintegration. We assume that :

(i) the atoms of radioactive substances are unstable and they disintegrated at random, that is, which particular atom of the substance disintegrates first depends upon the chance only, and

λ is the radioactive constant and it depends upon the nature of the radioactive substance. The negative sign shows that with the increase in disintegration the value of N decreases. 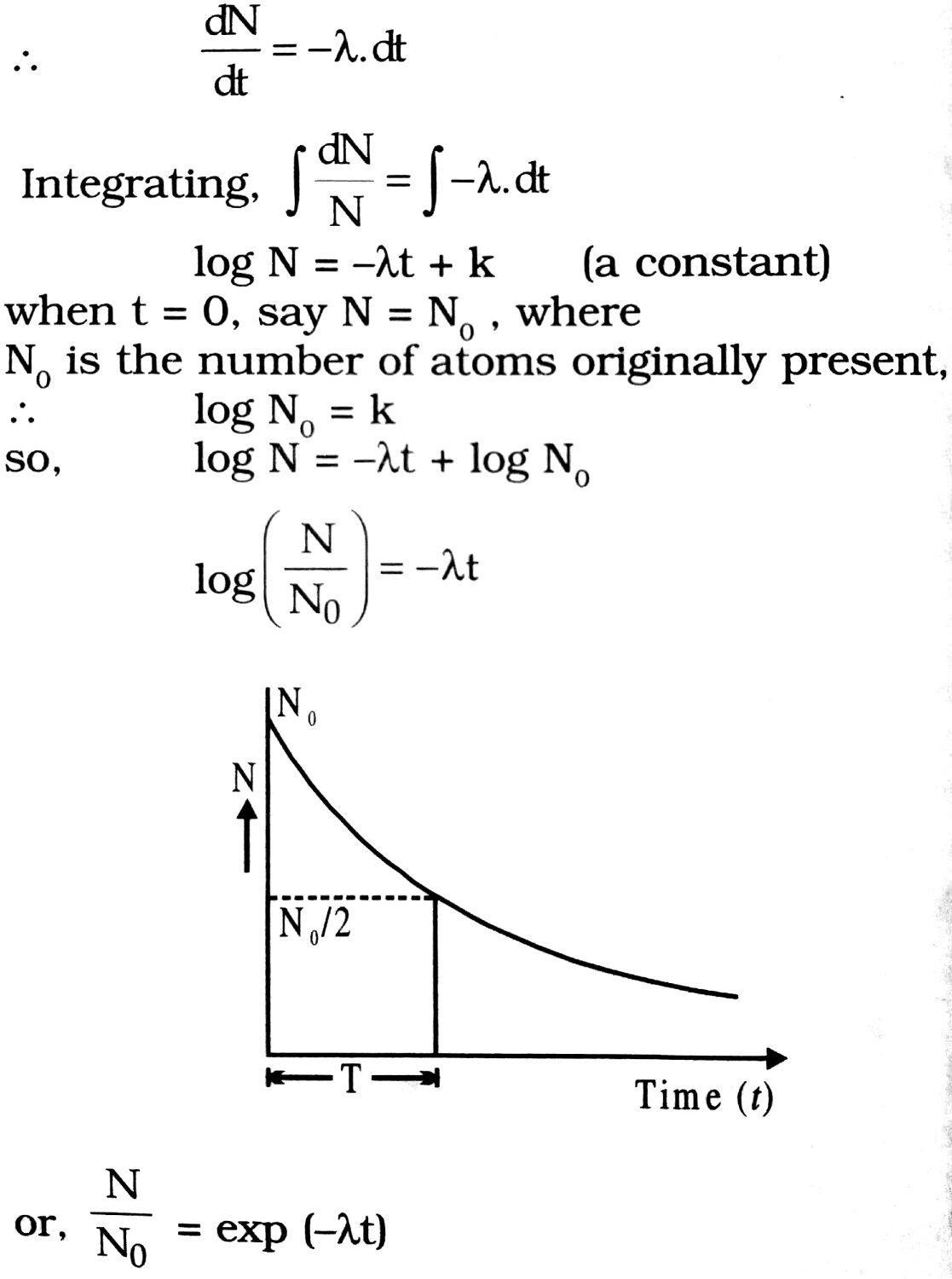 Thus, the number of radioactive atoms decreases exponentially with time as shown in Fig.

Q.11. Define the terms half-life period and decay constant of a radioactive substance. Write their S.I. units. Establish the relationship between the two.

Decay constant (λ) : Decay constant of a radioactive element is the reciprocal of the time at the end of which the number of atoms left undecayed reduces to 37% of its initial value. S.I. unit is sec-1.
Relation between λ and T. We know N = N0 e-λT 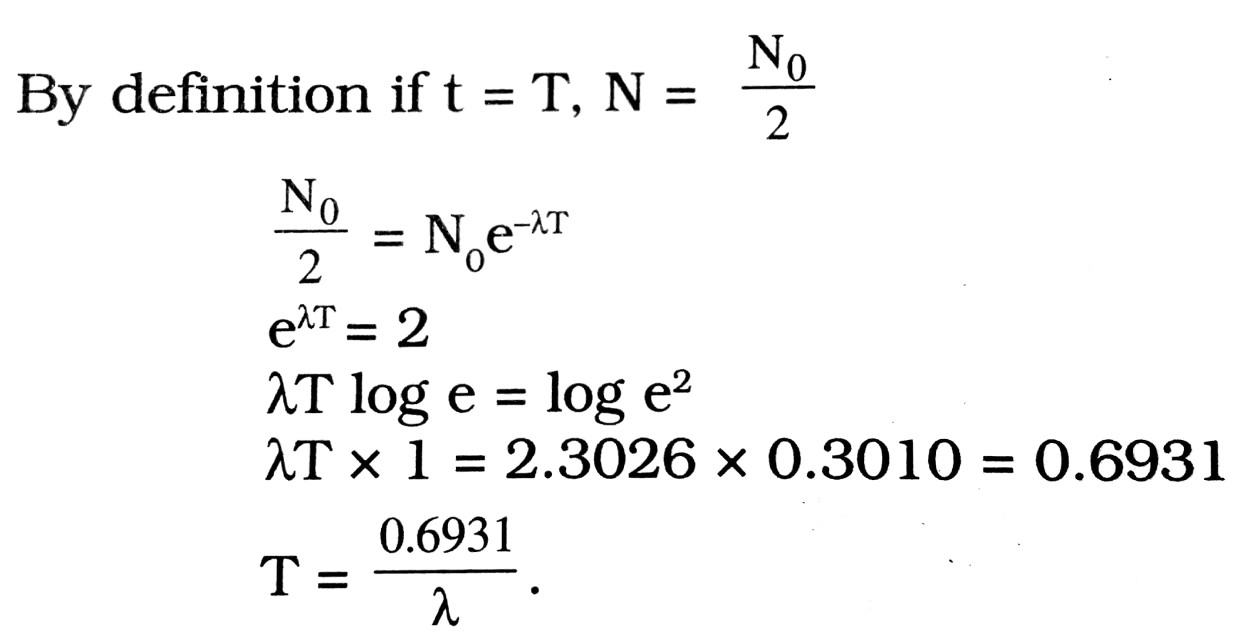 Q.12. The activity of a source undergoing single type of decay is I, at time t = 0. Obtain an expression in terms half life T1/2 for the activity 1 at any subsequent time. 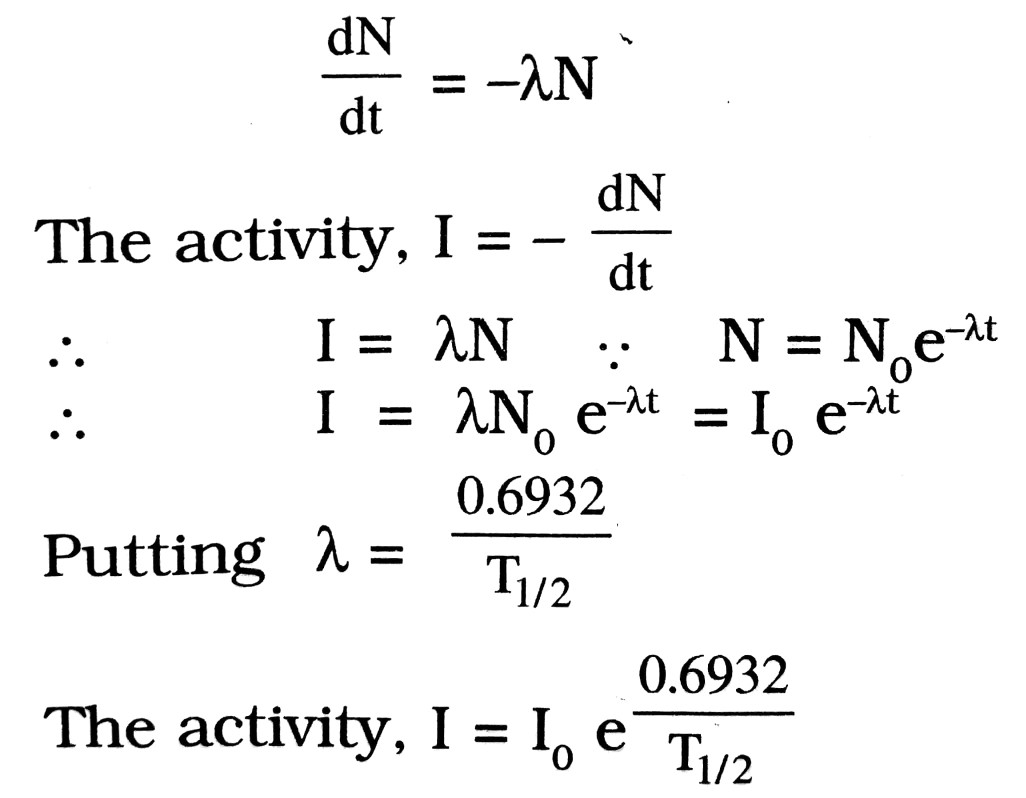 Q.13. What do you mean by nuclear fusion and nuclear fission ?

Ans ⇒ Neutrons coming out after fission 92U23 are slowen down after travelling at least 10 cm so that they may produce fission again. If thickness of system is less than 10 cm then neutrons come out without doing their job. So, if size of matter is large then this action is possible. So for sustained fission the mass of matter should be greater than a certain mass. This minimum mass of material for performing fission is called critical mass.

Ans ⇒ Carbon (C14) is produced in plants by the process of photosynthesis CO2 containing C14 is obtained by the action of high energy neutrons is cosmic rays on nitrogen and absorption of O2 by C14.
7N14 + 0n1 ——→ 6C14 + 1H1
All live plants and bones of animals have C14 which is in equilibrium with C14 in the atmosphere and remains constant so long as the plant or animal is alive, but after the same dies, radiocarbon C14 continues to disintegrate and number of disintegration per minute decreases with time. Thus the time by C14 to decay when the plant or animal died and ceased to assimilate C14, can be easily estimated.
The half life of C14 is 5730 years and it emits a β- particle of 0.155 MeV transforming itself back into N14. The age is calculated by this formula, N = N0e-λt and the value of N0 is 153 disintegration per minute per gram of carbon.

Q.16. How size of nucleus is related with mass number ?

Ans ⇒ The volume of nucleus is directly proportional to mass number. i.e. 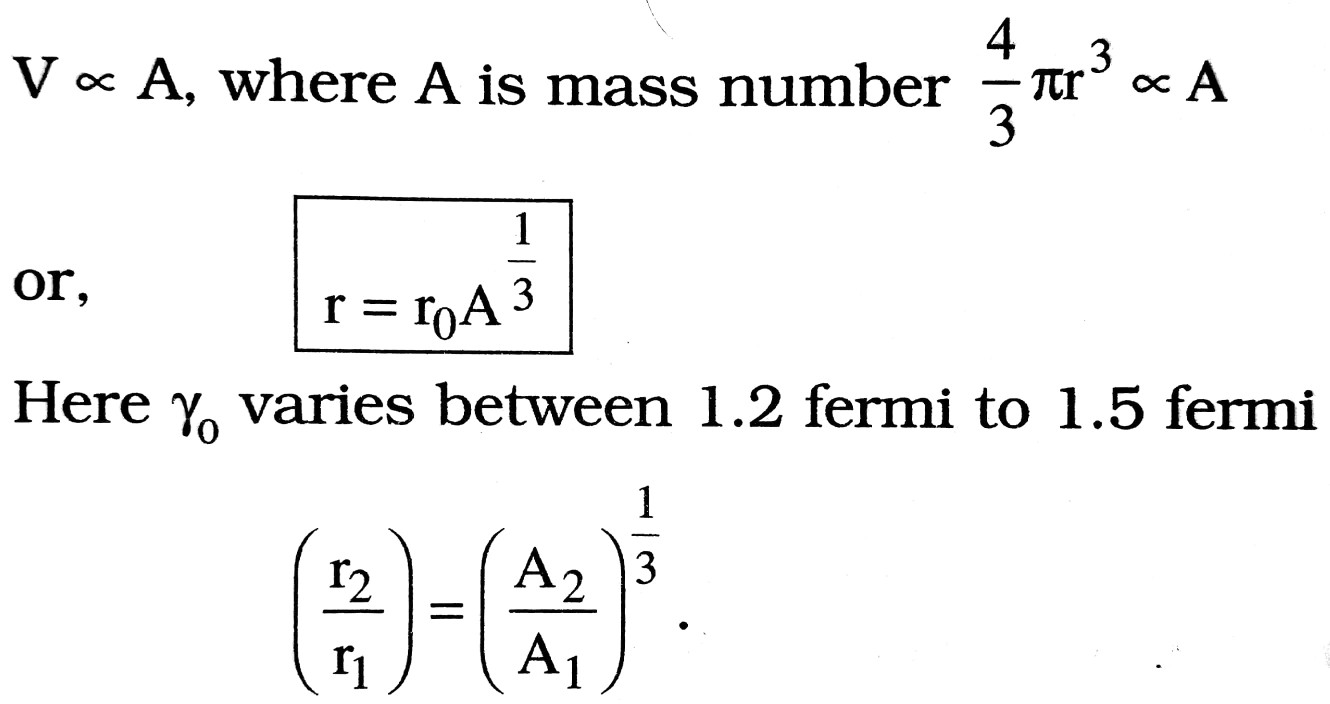