Ans ⇒ It is defined as the minimum distance from the centre of nucleus upto which an energetic ∝- particle travelling directly towards the nucleus can move during head-on-collision before coming to rest and retracing its path. It is denoted by r0.

Ans ⇒ It is defined as the perpendicular distance of the velocity vector of the a-particle from the centre if the nucleus when it is far away from the atom. It is denoted by b.

Ans ⇒ It is defined as the horizontal line which represents the total energy of an electron in a stationary orbit of an atom.

Q.5. How an energy level is represented ?

Ans ⇒ An energy level is represented by a horizontal line drawn according to some suitable energy scale.

Q.6. What are the limitations of Bohr’s atomic model ?

Ans ⇒ Limitations of Bohr’s atomic model are as follow :

(ii) It does not give any idea about the distribution of electrons in an atom.

(iii) This model could not account for the wave nature of electrons.

(iv) It does not give any idea about the relative intensity of spectral lines.

Ans ⇒ The experimental set up of Rutherford’s a particle scattering experiment is shown in Fig.

The important inferences drawn from the experiment are :
(i) The most of the mass and the entire positive charge of the atom is concentrated in very small volume of the atom called nucleus.

There are called Lyman series and lie in the ultraviolet region. 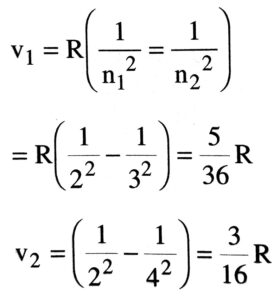 Ans ⇒ (i) An atom consists of positively charged nucleus responsible for almost the entire mass of the atom.

(ii) The electrons revolve round the nucleus in certain permitted circular orbits of definite radii.

where n is called principal quantum number and has the integral, values 1,2,3… The equation (i) is called Bohr’s quantisation condition.

(iv) When electrons revolve in permitted orbit, they do not radiate energy. Such orbits are called non-radiate or stationary orbits. Each stationary orbit is associated with a definite amount of energy.

(v) The energy is radiated when an electron jumps from lower to higher energy orbit.
If Ei and Ef are energies associated with the orbits of principle quantum number ni and nf respectively (ni > nf), the frequency of the radiation emitted is given by
hv = (Ei-Ef)                …(ii)

Ans ⇒ Bohr’s postulates :
(i) An electron in an atom revolves in a circular orbit around the nucleus. The force of attraction between the electron and the nucleus provides the necessary centripetal force for the circular motion.

For second line n = 4, therefore its wavelength λ is given as

Q.11. What are thermal neutrons ? Why are neutrons considered as ideal particles for nuclear fission ?

Ans ⇒ Such neutrons which have slowed down as a result of the collision against the hydrogen nuclei in a moderator are called thermal neutrons.
Neutrons are considered as ideal particle for nuclear fission because they are uncharged and therefore will not be repelled by any atomic nuclei at which they are thrown.

Q.12. Explain the term ‘distance and desert approach in Rutherford experiment and deduce the expression for it.

∴    Potential energy of ∝-particle at this distance (r0) from the nucleus,
= Potential x Charge

If we neglect the loss of energy due to interaction of a-particle with the electrons then at the distance of closest approach, a K.E. ⇒ P.E.

Obviously, the radius of the nucleus must be smaller than the calculated value of r0 as an alpha particle cannot touch the periphery of the nuclenson Account of strong repulsion.

Ans ⇒ Rutherford appreciated that when an ∝-particle passes through gold foil force acting between nucleus and ∝-particles is according to Coulomb’s law. It means the force of repulsion is inversely proportional to square of distance. Large the distance, smaller is the force so, ∝-particles passes from some region undeviated.
Gieger & Marsden came to the conclusion after experiment that force between nucleus and a particles is according to Coulomb’s law.

Ans ⇒ It is an arragement is which large amount of energy released during fission is controlled. It is a type furnace in which uranium is used in form of a fuel. First atomic pile was made is 1942 is Chicago university lab in the supervision of Fermi.