Q. 1. State the principle of production of em waves.

Two application of γ-rays :
(i) γ-rays are used in radiotherapy to treat tumours and cancer.
(ii) γ-rays (soft γ-rays) are used to kill micro organisms in food industry so as to preserve food stuffs for a longer time,

Ans ⇒ Three properties of infra-red rays :
(i) They are e.m. waves and travel with the speed of light in vacuum.
(ii) They obey laws of reflection and refraction.
(iii) They affect a photographic plate.

Three properties of UV-rays rays :
(i) They obey the laws of reflection and refraction.
(ii) They can undergo interference and can be polarised.
(iii) They can cause flourescence in certain materials.

Three properties of X-rays :
(i) They can undergo reflection, refraction, interference diffraction and polarisation.
(ii) They affect photographic plates.
(iii) They cast shadows of the objects falling in their path due to the reason that they travel in a straight line.

Q.4. How you can establish that light waves are transverse in nature ?

Q.5. Find an expression for the velocity of electro-magnetic waves. 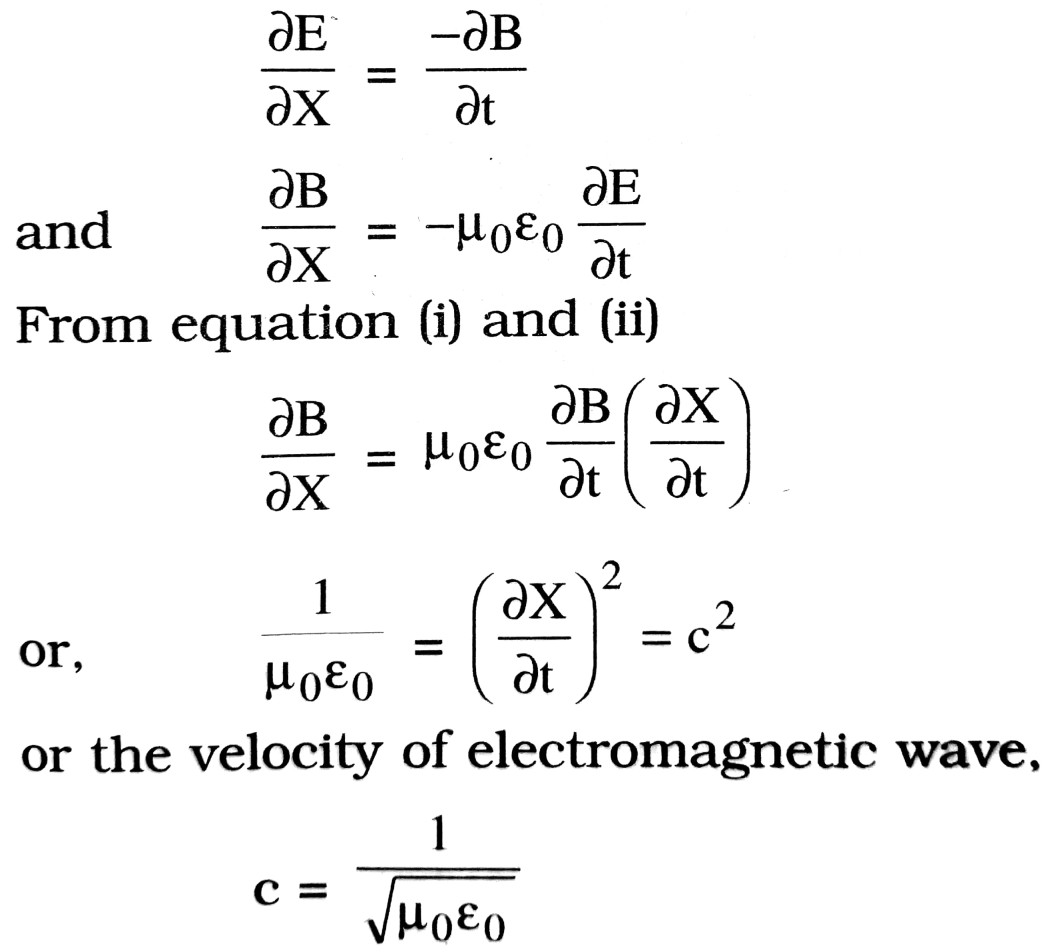 Q.6. Establish a relation between displacement current and conduction current.

Q.7. What is sky wave propagation of waves ? Explain why sky wave transmission of electromagnetic waves cannot be used for TV transmission.

Ans ⇒ In sky wave propagation, transmitted wave goes up in the sky and is reflected back from the ionosphere. Waves transmitted towards ionosphere suffer total internal reflection. Frequency of the wave reflected depends upon electron density (N) of particular layer of ionosphere. For a given value of N there is a critical frequency above which wave does not suffer T.I.R.
Fe = 9(Nmax)1/2
There is a range of critical frequencies approximately from 5 to 10 MHz. Frequencies higher than this cross the ionosphere and do not return back to the earth.
As TV transmission takes place at frequencies higher than 10 MHz (= 80 MHz to 200 MHz) sky wave transmission of electromagnetic waves cannot be used.

Q.8. What is displacement current ? Explain its cause.

rate of change of electric flux.

Ans ⇒ The following are the properties of electromagnetic waves :
(i) They are transverse in nature.

(ii) They travel with the same speed of light in vacuum (i.e., C = 3 x 108 ms-1) and in a material medium their velocity is u and t are absolute permeability and permitivity of that medium.

(iii) They don’t require any material medium for their propagation.

(v) They are produced by accelerated or oscillating charge.