Q.1. What are properties of a bar magnet ?

Ans ⇒ The following are the main properties of a bar magnet :

(i) Property of attraction : The magnet attracts small pieces of magnetic substances.

(iii) Like poles repel and unlike poles always attract each other.

(v) Repulsion is the surest test for distinguishing between a magnet and a piece of iron.

(vi) Property of induction : When a piece of ordinary magnetic material is brought near a bar magnet, it acquires the property of a magnet without any actual contact.

Ans ⇒ (a) It is defined as the lag of intensity of magnetisation behind the magnetising field during the process of magnetisation and diamagnetisation of a ferromagnetic material. It is shown in the figure. The curve ABCDEFA is known as hysteresis loop. 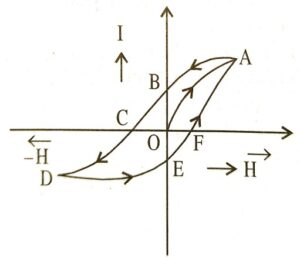 (b) Retentivity : It is defined as the value of intensity of magnetisation of a material when the magnetising field is reduced to zero. e.g., OB represents retentivity of the material.

(c) Coercivity : It is defined as the value of the reverse magnetising field required to reduce the residual magnetism to zero.
eg., OC represents coercivity of material.

(d) Hysteresis loss : It is defined as the energy loss per unit volume per cycle of magnetisation. It is equal to the area under I – H curve.

Q.3. Give any Four properties of diamagnetic substances.

Ans ⇒ (i) They are weakly repelled by a magnet.
(ii) They are weakly magnetised in a direction opposite of that of applied magnetic field.
(iii) Magnetic flux density in them is less than in vacuum.
(iv) Magnetic susceptibility in their case has small negative value.
(v) Value of relative permeability in just less than 1.
(vi) They do not obey Curie’s law. 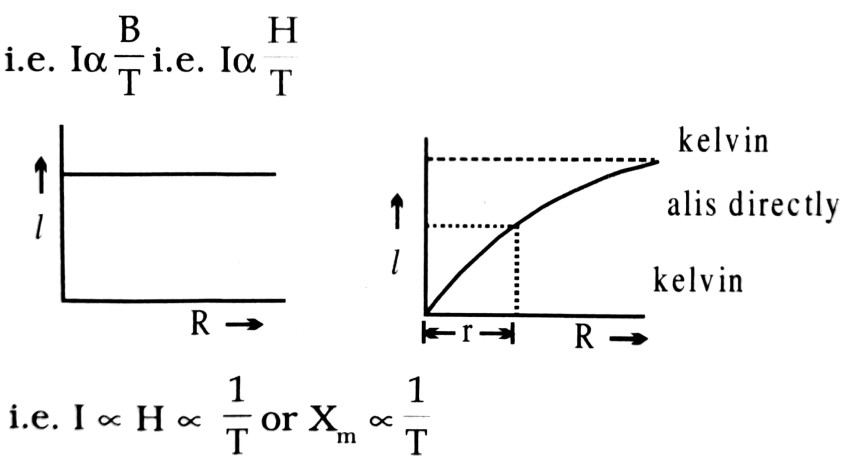 Where Xm is called susceptibility of the material.
∴   Xm = C/T where C is called as Curie constant.

Q.5. What is tangent law in magnetism ?

Ans ⇒ Consider a magnet of pole strength m and magnetic length 21. This magnet is suspended or pivoted at its centre so that it can rotate freely about the point O. If this magnet is acted upon by two 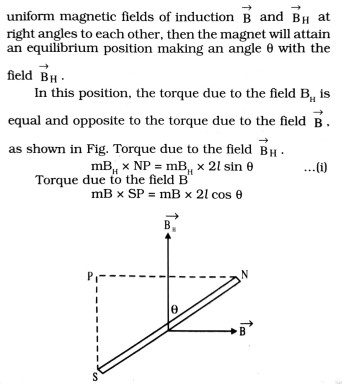 Q.6. Obtain an expression for the magnetic potential at a point due to an isolated magnetic pole.

Ans ⇒ Consider a very long magnet of pole strength m so that the effect of its S-pole at a point P be negligible, compared to that of the N-pole (Fig). 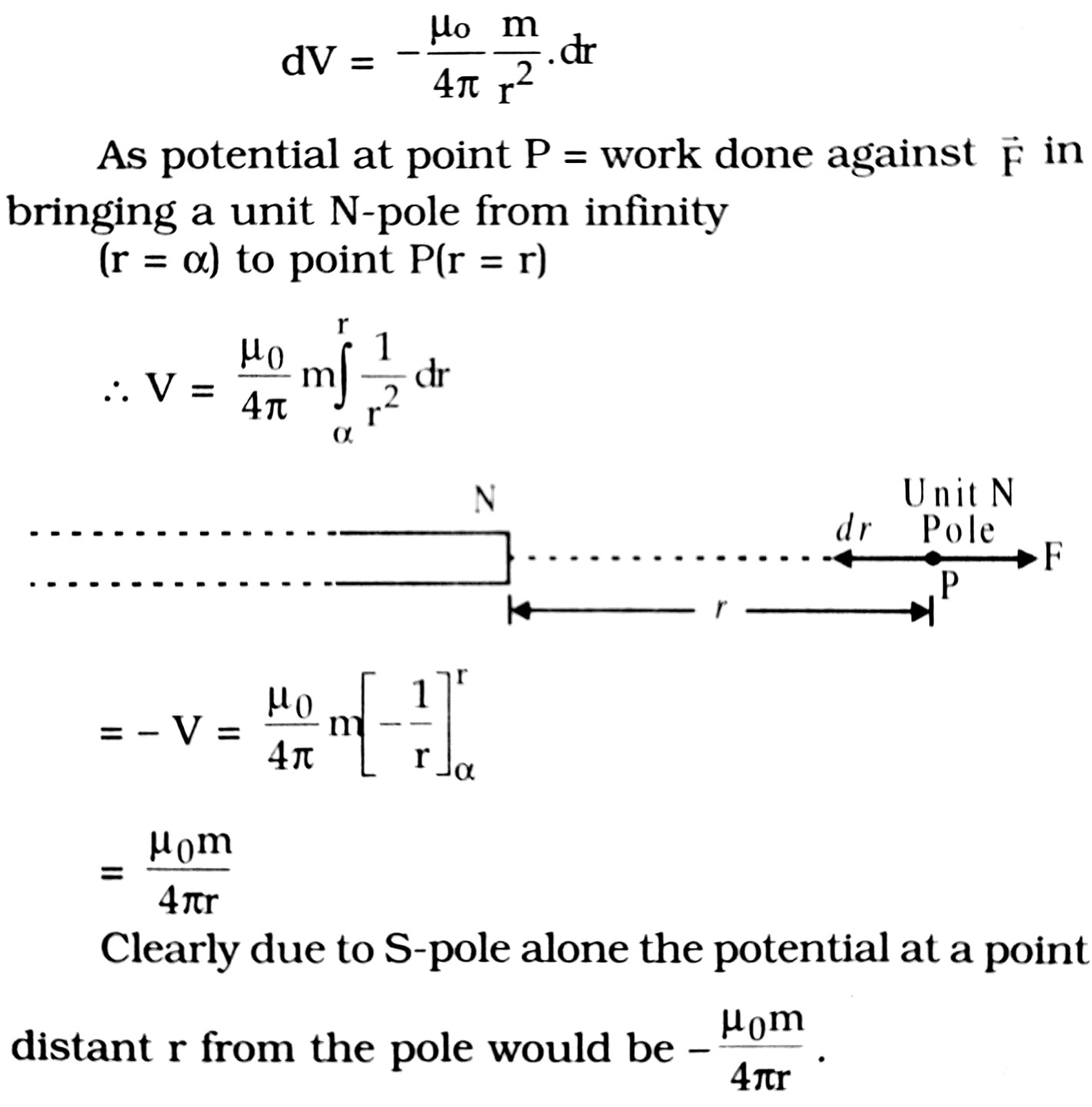 Q.7. Give the differences between the magnetic properties of soft iron and steel.

Ans ⇒ The differences between the magnetic properties of soft iron and steel are as follow :

Q.8. Why is soft iron preferred in making an electromagnet ?

Ans ⇒ Soft iron has high value of retentivity and low value coercivity due to which it has less area of hysteresis loop, hence the loss in energy during magnetisation and demagnetisation is very small, that is why soft iron is used to make an electromagnet. 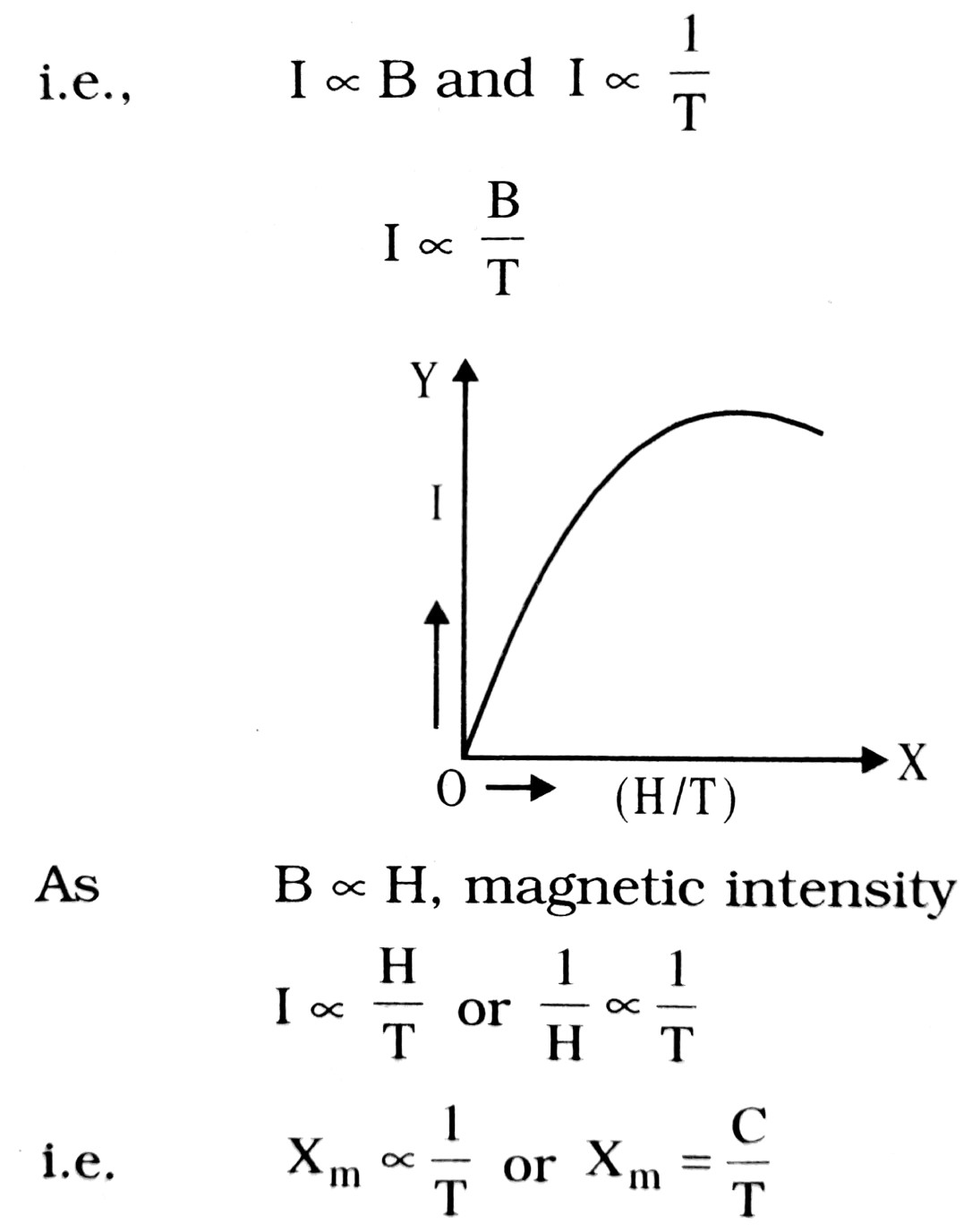 where C is a constant of proportionality and is called Curie constant.
The law is physically reasonable as increasing H tends to align the elementary dipoles in the specimen increasing I, whereas increasing T,tends to interfere with this alignment, decreasing I.
The variation of I with (H/T) is shown in Fig. Curie’s law is well verified experimentally provided the ratio H/T is not too large. Saturation is reached when H/T reaches a certain limit, as is from the graph.

Q.10. How will a dia, para and a ferromagnetic material behave when kept in a non-uniform external magnetic field ? Give one example of each of these materials.

Q.11. Why is the plane of the coil of tangent galvanometer set in earth’s magnetic meridian ?

Q.12. If a compass needle be placed on the agnetic north pole of the earth, then how will it behave ?

Q.13. Define the terms magnetic inclination and horizontal component of earth’s magnetic field at a place. Derive the relationship between the two with the help of a diagram.

Ans ⇒ Inclination : The angle between the direction of the earth’s magnetic field at a place and the horizontal is called the angle of inclination at that place.

Horizonal componenent (H) : The total intensity of the earth’s magnetic field at any point m may be resolved into two rectangular components, one along the horizontal and the other along the vertical direction. 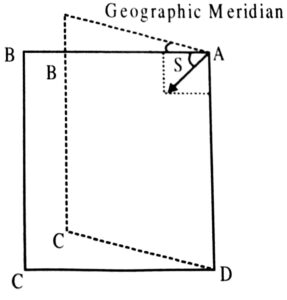 Q.14. Why is diamagnetism independent of temperature ?

Ans ⇒ The induced magnetic dipole moment in a diamagnetic substance is always opposite to the applied magnetising field irrespective of the state of thermal agitation of the atoms. Therefore, diamagnetic effect does not depend upon temperature.

Ans ⇒ The SI units of magnetising force (H) are amperes m (Am-1).