Q.1. What are advantages and disadvantages of a.c. over d.c. ?

(ii) A.C.voltage can be easily stepped up or stepped down with the help of a transformer.

(iii) It is easy to transfer high a.c. voltage to distant places at a small loss of electric power.

(iv) A.C. can be easily converted into d.c. by using a rectifier.

(v) The alternating currents can be easily regulated by using a choke coil without loss of electric energy.

Disadvantages of a.c. over d.c. :
(i) It cannot be used in electrolytic processes such as electrolyping, electroplating etc.

(ii) A. C. supply is more dangerous and fatal than d.c. due to the shock produced by it.

(iii) To transmit a.c., a number of thin wires insteads of a thick single wire are used so as to avoid skin effect.

Q.2. Distinguish between resistance, impedance and reactance of an a.c. circuit.

Ans ⇒ Difference between resistance, impedance and reactance of an a.c. circuit are as follow :

Q.4. Explain the use of a choke coil or alternator of a motor.

Ans ⇒ Choke coil : It is an induction coil of low resistance which reduces the high value of alternating current (a.c.) without any loss of heat energy.
It is used in a tube light in the series so that the tube light is protected from the initial high value of current.

Alternator : It is a safety device connected in series of a motor. The initial current of a motor is 6 or 8 times the average value. The motor alternater reduces this value to normal level. Thus motor is safe.

Q.5. Why is a choke coil needed in the use of fluorescent tubes with a.c. mains ? Why can we not use an ordinary resistor instead of the choke coil ?

Q.6. Show that the angular frequency of free oscillations of an LC circuit is equation

Here dl/dt is positive.
Voltage across C at time t = q/c and induced voltage across inductance voltage will be

By Kirchhoff’s second law since supply voltage is zero. Therefore

Negative sign shows that as q decreases I increases.
Putting value of I from (ii) in (i)

Dividing both sides by L

This is of differential equation type

Q.7. Show that in the free oscillations of an LC circuit, the sum of energies stored in the capacitor and the inductor is constant in time.

Ans ⇒ Energy stored in a capacitor at any

Energy stored in an inductor at any instant 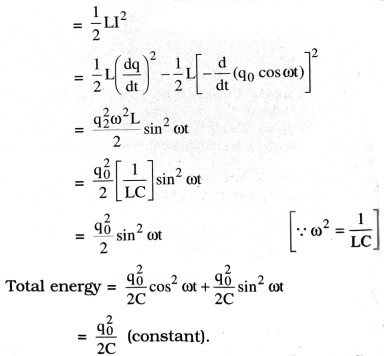 Q.8. An a.c. source ε = ε0 sin ot is applied across an inductance L obtain an expression for the current.

Ans ⇒ Alternating e.m.f. applied across inductor is represented as
ε = ε0 sin ωt
Let the inductor be a pure inductor of inductance L. If dl/dt is the rate of change of current through L at any instant, then induced e.m.f. in the inductor is equal to

Or dl = sin ωt dt
Integratiting both sides, we get

Comparing Eq. (iii) with Ohm’s law, I = V/R and denoting the effective resistance or inductive reactance by XL,we get

Q.9. What is a choke coil ? Why is it preferred to resistance in a.c. circuit ?
In figures (a), (b) and (c) three a.c. circuits with equal currents have been shown.

If the frequency of e.m.f. be increased, then what will be the effect on the currents flowing in them ? Explain with reason.

Ans ⇒ Choke coil : It is a high inductance coil made of thick insulated copper wire wound closely in a large number of turns over a soft iron laminated core.
Choke coils reduces current without wasting electrical energy in the form of heat.
(i) There is no effect in ‘a’ as the current flowing in the coil as R is not affected by the frequency change.
(ii) Current will decrease in (b) because inductive reactance XL = 2πvL and it increases with increase in frequency.
(iii) Current will decrease in (c) because capacitive reactance
Xc = (2πvC)-1
As Xc ∝ 1/v
It will decrease with increase in frequency.

Q.10. Derive an expression for the impedance of an a.c. circuit with an inductor and a resistor in series.

Ans ⇒ Let an alternating emf ε0 = ε sin ωt
is applied across a series combination of an inductor and a resistor as shown in Fig. The inductance of the inductor is L and the resistance of the resistor is R. 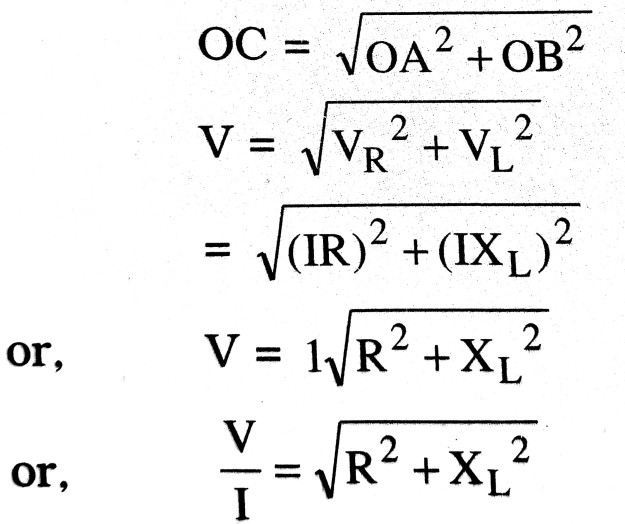 Comparing the above expression with Ohm’s law, we find that the effective resistance or impedance (2) offered by a series LR-circuit is given by :

Q.11. Show that the average value of a.c. over a complete cycle is zero while for a half. cycle it is

where I0 is the peak value of current.