Q.1. (a) What is Rutherford’s a-scattering experiment ?
(b) Describe Rutherfor’s atomic model.

Ans ⇒ (a) Ratherford’s α-scattering experiment : To find out the structure of atom Rutherford performed an experiment. In this experiment he obtained α-particle from radioactive substance and made to incident on atoms of different elements. He found that α-particles are deflected in different directions. He made to incident α-rays on thin gold foil. the fine pencil of ray (particle) having high kinetic energy (K.E.) obtained from radioactive element polonium. To measure the feflection of α-particles a scientilation counter is used having a flourescent screen. When α-particle strikes with screen, they are visible in microscope. Counter is adjusted in different situation the deflection of a-particles are measured. The total arrangement is kept in vacuum, so that there is no collision of α-particles with air particles.

From this experiment Rutherford found following :
(i) Most of α-particels cross gold foil without deviation. It was concluded that most of the part of atom is hollow.

(iii) Some α-particles (one in 20,000) are such which are returned by 90° or more. This is called back scattering. It was concluded that high repulsive force should be needed to return a-particles of high speeds.

On the basis of his experiment he gave following important facts about structure of atom:

(i) Discovery of nucleus : Rutherford told that total positive charge and mass are concentrated in a given small region called nucleus of atom. Beside it, he estimated the radius of nucleus as 10-14 metre (order). Nucleus is 1/104 times the size of atom.

(ii) Coulomb’s law is correct for atomic distance. and (iii) Calculated the size of nucleus.

(ii) Electrons are distributed in hollow sphere of radius 10-10 metre around the nucleus, the total negative charge of electrons is equal to total positive charge.

(iii) Electrons in atom are not stationary. If they are taken to be stationary then they should fall in nucleus due to force of attraction. But it is not so. He proposed that electron revolve in different orbit around the nucleus. The necessary centripetal force is obtained or provided by Coulomb’s force acting between nucleus and electron.

Q.2. State Bohr’s postulates for an atom ? Calculate energy of moving electron for nth orbit ? What is the significance of negative energy ?

(i) Atom is speherical whose central part is positively charge called nucleus. The charge on nucleus is +ze, where z is atomic mumber & e electronic charge.

(ii) Electrons move round the nucleus in circular orbits & they do not emit energy. They are called non radiatiing path or stable orbit.

(iv) Electrons revolve in those orbits only in which their angular momentum is integral multiple of h/2π
.

(v) When electron goes from higher orbit to lower orbit, there is emission of energy but when it goes from lower to higher orbit, energy is absorbed in terms of photon (hv) i.e.

Only photon of fixed frequency is emitted from an atom due to which line spectrum is obtained.
Lines of Hydrogen spectrum : Expression for energy of n electron th orbit : Here, En = Kinetic energy + potential energy 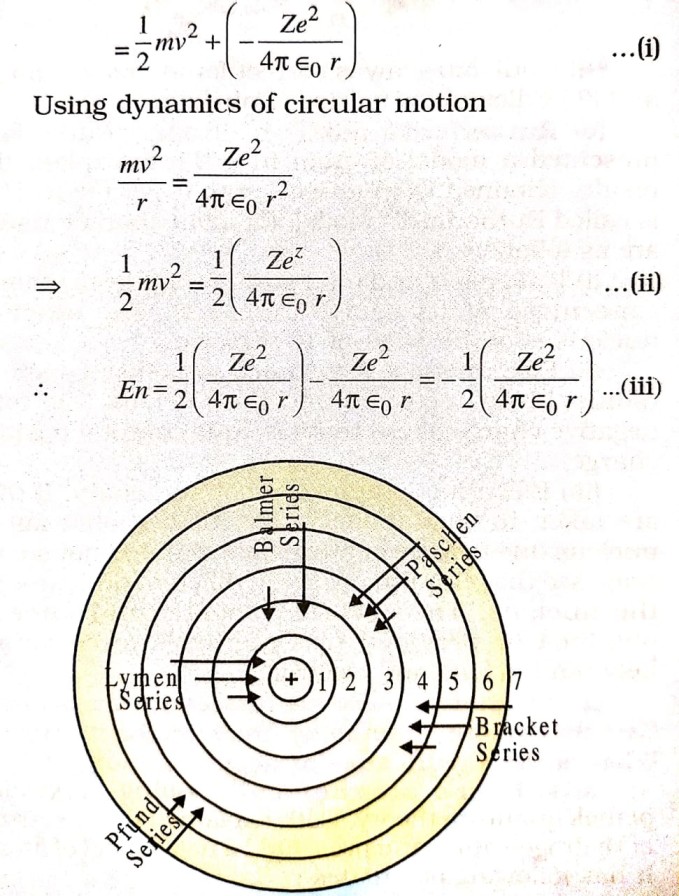 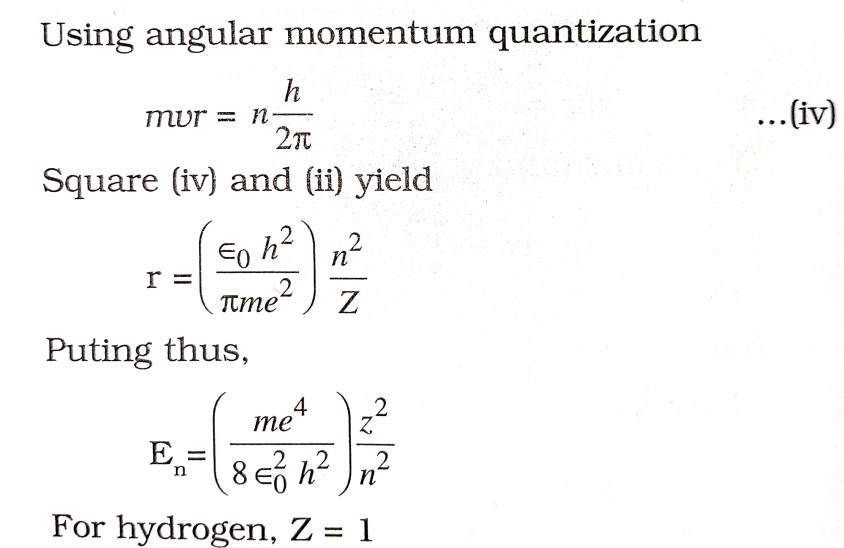 Ans ⇒ Nuclear reactor is a device in which nuclear fission is maintained as a self-supporting yet controller chain reacetion.

Construction : Components of a nuclear reactor is shown in figure. 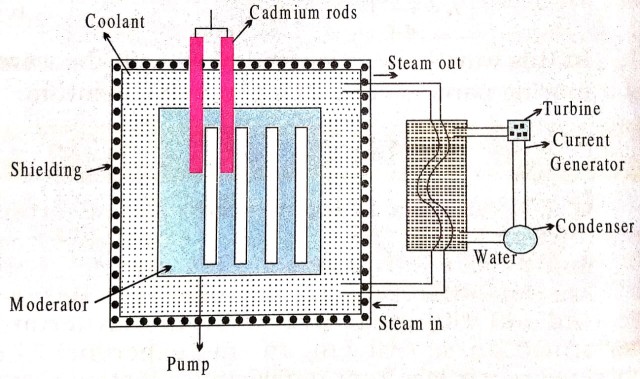 (iii) Contro, Material : Control material is used to control the chain reaction and to maintain a stable rate of reaction. this material controls the number of neutrons available of the fission. For example, cadmium rods are inserted into the core of the reactor because they can absorb neutrons. The neutrons available for fission are controlled by moving the cadmium rods in or out of the core of the reactor.

(iv) Colant : It is a cooling material which removes the heat generated due to fission in reactor. Commonly used coolantsare water, CO2 nitrogen etc.

Working : A few 92U235 nuclei undergo fission liberating fast neutrons. these fast neutrons are slowed down to an energy of about 0.025 eV by the surrounding moderator (graphite). The cadmium rods are used to control the chain reaction. The fission produces heat in the nuclear reactor core, the coolant transfers this heat from the core to the heat exchanger, where steam produced at a very high pressure runs a turbine and the electricity is obtained at the generator. The dead steam from the turbine condenses into water and is returned to the heat exchange.