Ans ⇒ (a) Earth’s or Terrestrial Magnetism : Earth behave like a huge magnet. The axis of magnetic needle suspended freely indicates the magnetic force field. Magnetic poles do not coincide with geographical poles. The physical quantities which specify the magnitude & direction of magnetic field at a place are called magdnetic elements. Magnetic elements are following there :
(i) Declination : At a place, angle between geographical meridian & magnetic meridian is called declination. It is espessed Gsθ° east or 0° west ata place.

(ii) Dip or inclination : At a particular place angle made by magnetic force field of earth with horizontal is called dip. or dip angle or inclination. Its value changes from place to place.

Q.3. Give the theory of oscillation magnetometer. How the magnetic moments of two bar magnets are compared dithout meassuring moment of inertia.

Ans ⇒ Theory : When a magnet is suspended freely in a uniform field, using an unspun thread, it comes to rest in a direction NS parallel to direction of field. If this magnet is slightly deflected from its equilibrium position and left, the magnet begins to vibrate simple harmonically about the direction of the field as tis mean position.

Construction : Oscillation magnetometer is a rectangular box made of wood. The four sides and the top contain glass plates. From the cenre of the upper lid a hollow cylindrical pipe (V) is fitted. At the top of it there is a hook H. From the hook a silk theread is attached whose other and contains a stirrup made of brass S. In this stirrup a maghnet way be balanced in horizontal plane. At the end of the piep there is a torsion head T. In order to cout the oscilliation of the magnet there are two windows W1 and W2 in the top lid. At the bottom there is a glas plate on which refrence line has been drawn. Looking at the image of the magnet in the plane mirror and the line drawn on it, the oscillation can be counted correctly.

The corresponding time periods are T1 and T2 respectively are determined. if the moments of the magnets be M1 and M2 and M1 > M2 then is the first condition the effecting magnetic moments will be (M1 + M2) and second case (M1 – M2) since the magentic moments are vector quantities.
Both the magnets oscillate together and therefore in both cases the moment of inertia will be I = (I1 + I2) since they are scalar quantities. Hence, 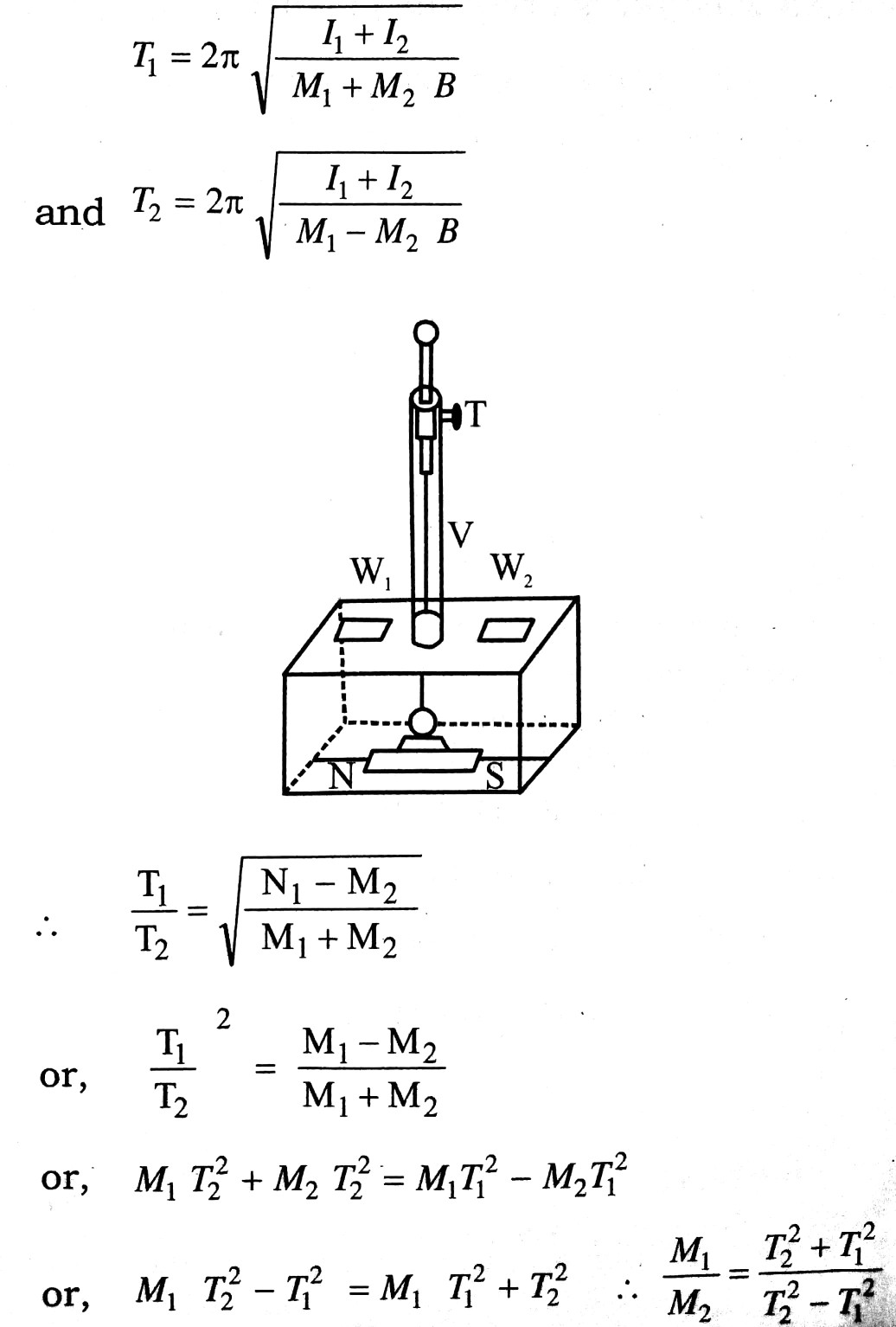 Ans ⇒ (a) Torque on a magnet :
NS is a bar magnet of pole strength pand length 2l. It is suspended freely in a uniform magnetic field

. When it is deflected from the direction of

) act on its two poles which are equal, opposite and parallel. Hence a couple is formed which tr is bring the magnet in the direction of

. This couple is called centrolling couple. The moment of couple or torque is

where m = p.2l = magnetic moment of magnet.
Since

(b) Work done in the deflection of a magnet in a uniform magnetic field :
We consider a magnet SN of magnetic moment

. When it is deflected form the direction of magnetic field

by an angle φ, the moment of entrolling couple acting on the magnet is given by 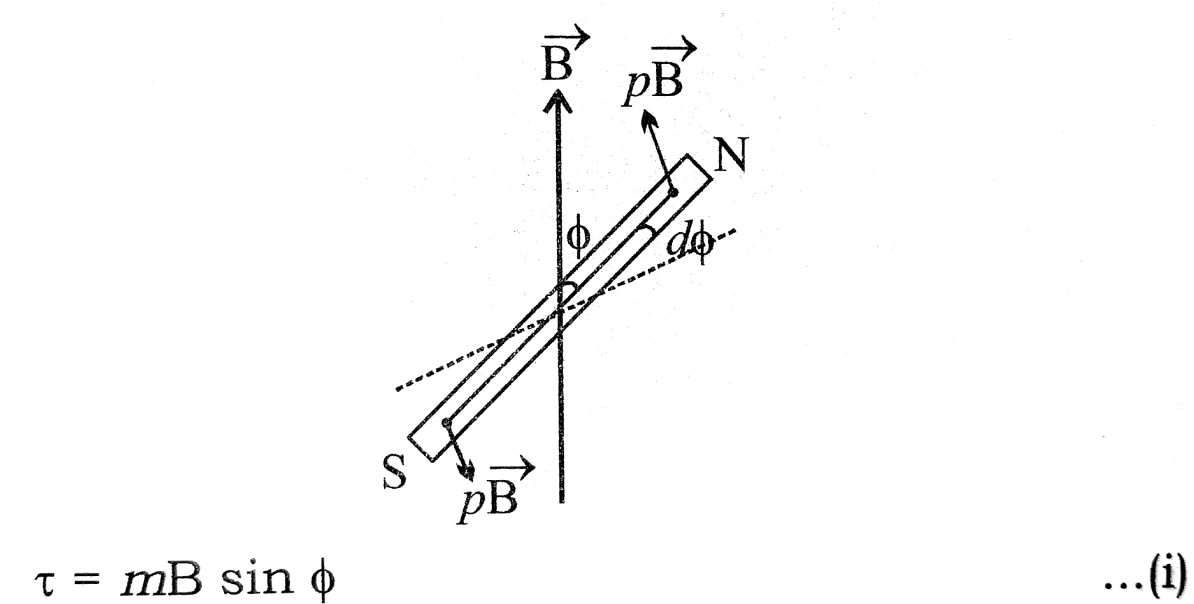 If the deflection is increased by a small angle dφ, work done against the couple is
dW = torque x angular displacement 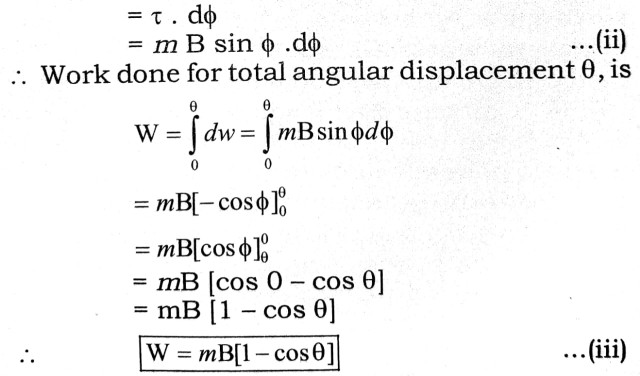 This is the required work done.

Q.5. Prove that a bar magnet is equivalent to a current carrying solenoid.

Ans ⇒ Solenoid as a Bar magnet :
We know that the existence of a magnetic field is due to a moving charge or due to an electric current. In this context according to magnetic effect of current, each current loop behaves as a magnetic dipole having magnetic dipole moment. 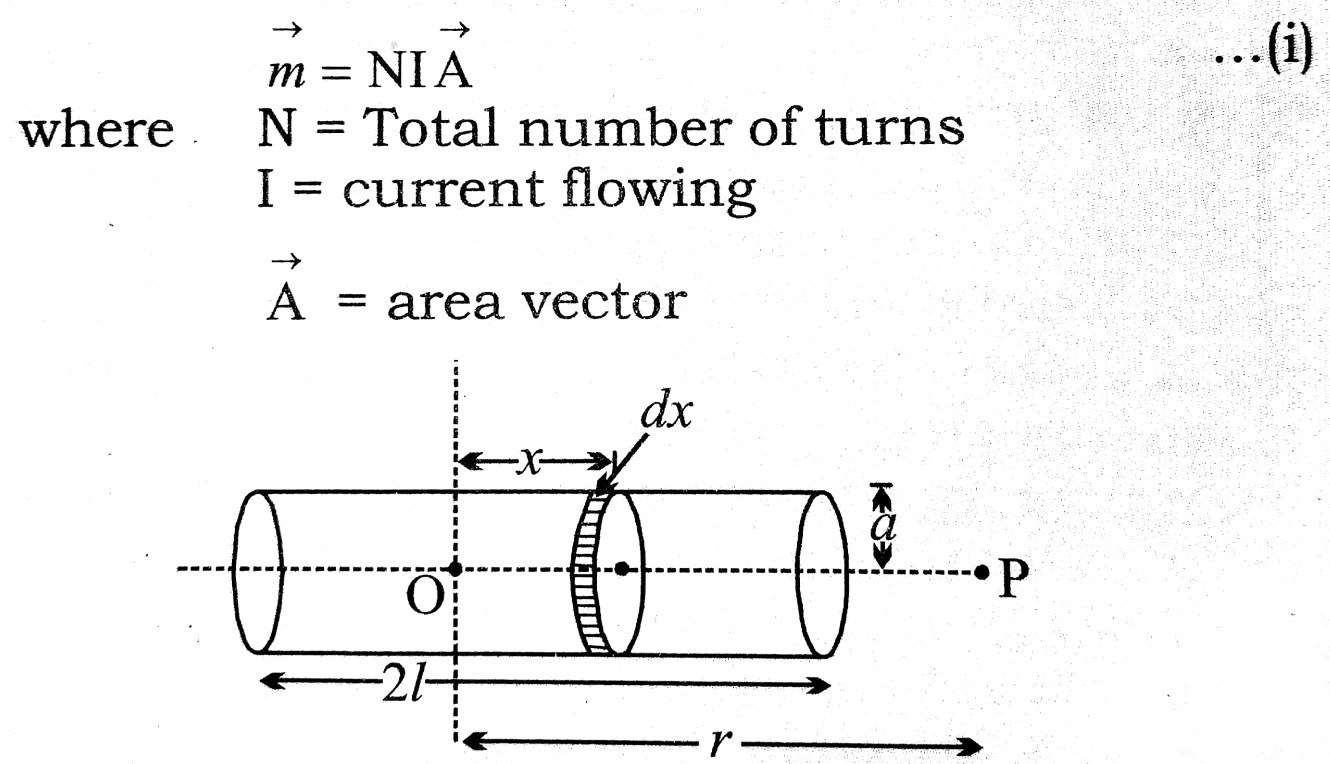 Number of turns per unit length n = N/2l
Current flowing in solenoid = I
A small element of solenoid of thickness dx at a distance x from the centre of the solenoid is a circular coil. Magnetic field at any point P on the axis of the circular coil is given by 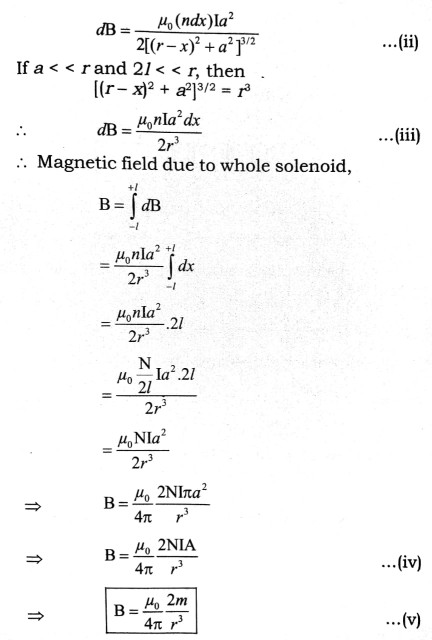 The magnetic field on the axis of a small magnet is just equal to the value in eq. (v). It proves the equivalence of solenoid and a bar magnet.