Q. 1. What is energy ? Distinguis between conductor, semiconductor and insulator on the basis of energy band. How does the resistance of semiconductor varries with the change of the temperature, Explain.

Ans ⇒ Depending upon the relative positions of the valence band and the conduction band, the solids can be classfied into conductors, insultators and semic conductors.

Band theory of Solids : By the help of band theory so solids metals, insulators and semiconductor can be classfied. the energy band diagram for metals is such that either the conduction band is partially filled with electrons or the conjuction and valence band partly overlap each other and there is no forbidden energy gap in between. From the band theory of solids the electons are tightly band with their nucleus. The energy level diagram of such type of atoms are shown in fig. (a). If such types of atoms combines them in each condition the corresponding energy level will be some different continious energy level of energy, as shown in fig. (b).
There are majority of electrons in the solids. Due to shich new energy levels are very closest throught wihch bonds are developed, as shown in fig. (c). The energy levels are continious in ls, 2s, 2p, 3s.
It the no. of atoms are N then for every 1 the corresponding ml-no. of conditions is (2l + 1) and for a given s are represented by two values for ms = (= ±1/2).

The formation of bands in different solids are different. Electrons can blive only in these states or can travell. These bands are shaded and called allowed bands. The mid area of the allowed bands are called forbidden rigions because electrons are not found in this band. Commonly the lower most band Alled up with electrons. The uppermost band which is partially or fully filled up with elecrons are called as valence band.

Conductors : The energy band diagram fo metals is such that either the conduction band is partially filled with electrons or the conduction and valence band partly overlap each other and there is no forbidden gap in between, as shown in fig, (c) and in fig. (d). In both the situations, it can be considered that the metal has a single energy band which is partly filled and partly empty. Even if a small electric field is applied across the metal. These free electrons start moving in a direction opposite to the direction of electric field. Due to it, a current begins to flow throught it and hence metal behaves as a conductor. 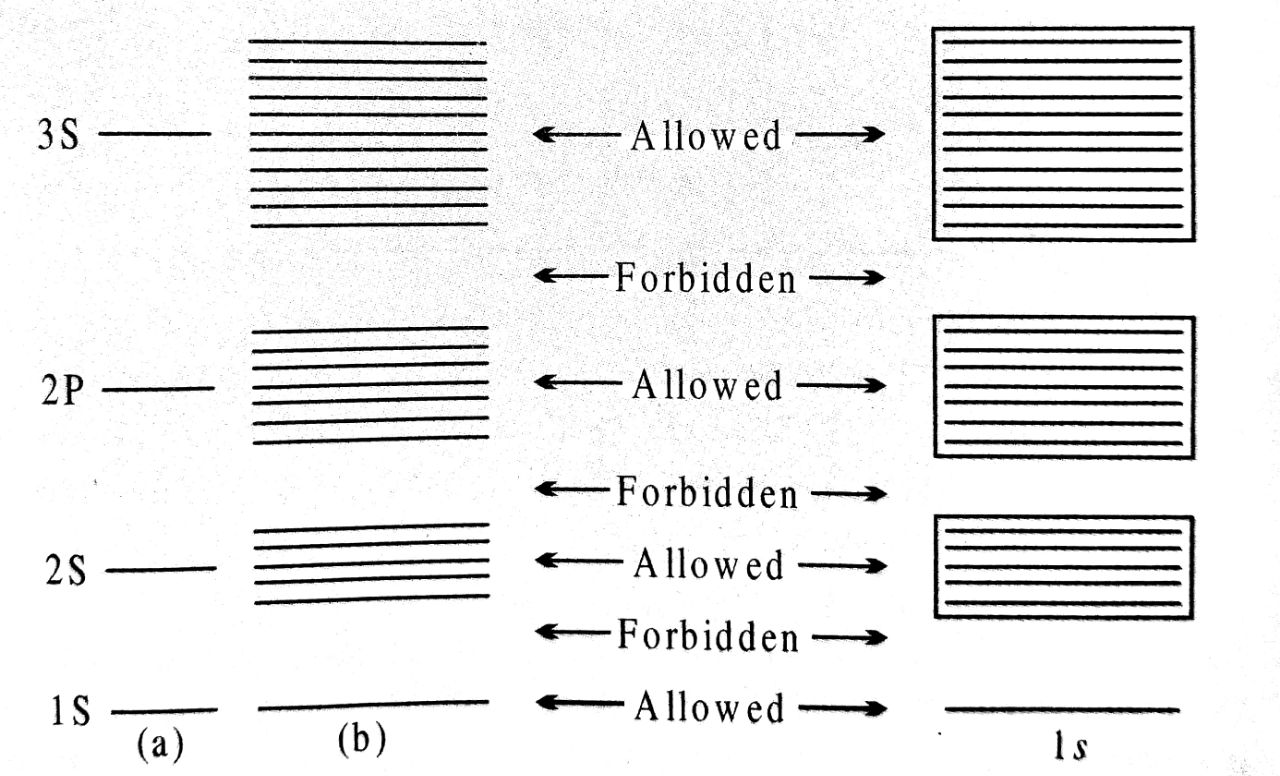 However at room temperature, some electrons in the valence band acquire thermal energy greater than energy gap of lev and jump over to the conduction band where they are free to move under influlence of even a small electric field. As a results of it, the semiconductor acquires small conductivity at room temperature.

Q.2. Draw the Input/Output characteristic curve in CE mode. What do we understand by the cut off, active and saturation states of the transistor ?

Ans ⇒ Circuit diagram to study the common emitter characteristics of a transistor is shown in figure A. 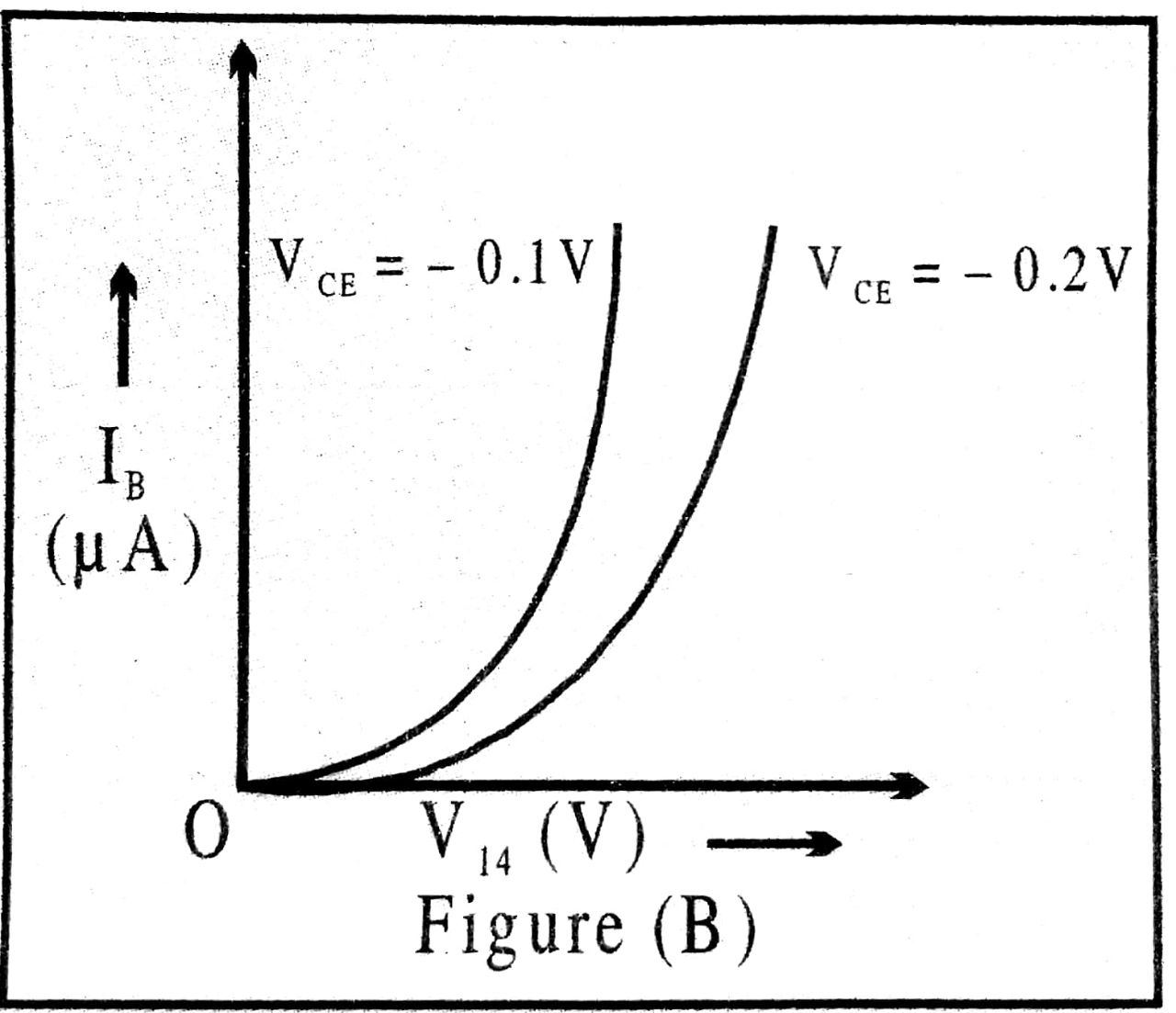 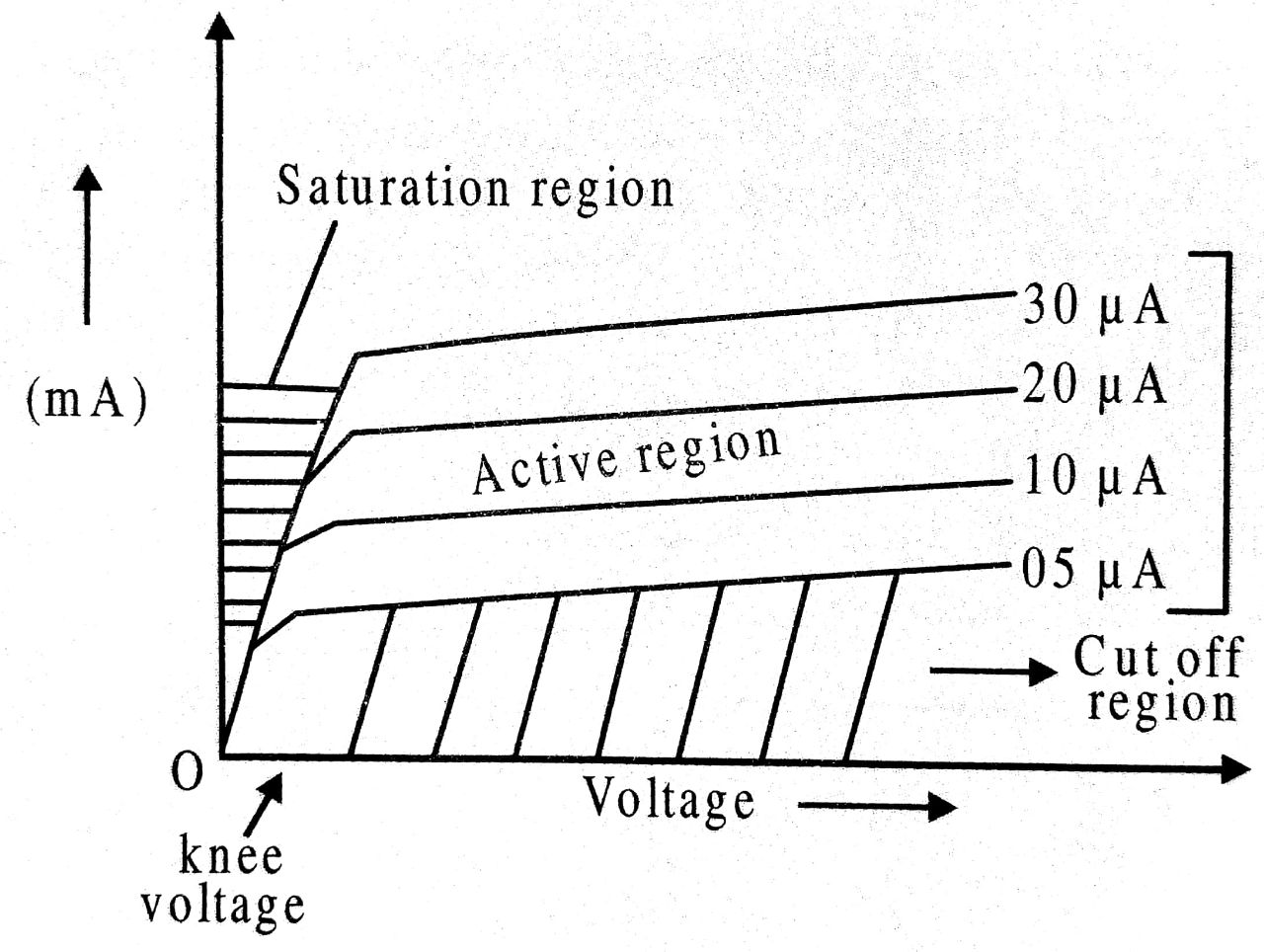 (ii) Cut off region : The collector current has finite value under this condition. In order of cut off the transistor, the emitter junction has to be made slightly reverse biased in addition to IB = 0.

(iii) Saturation region : Saturation region lies close to zero voltage axis where all the curves coincide. In this region, collector current is independent of the base current.
When used as a switch the transistor does not remain in active region. Active region is used during Transistor Amplifier.

Q.3. Explain (i) Forward biasing (ii) reverse biasing of a p-n junction diode. With the help of a circuit diagram, explain the use of this device as a rectifier. 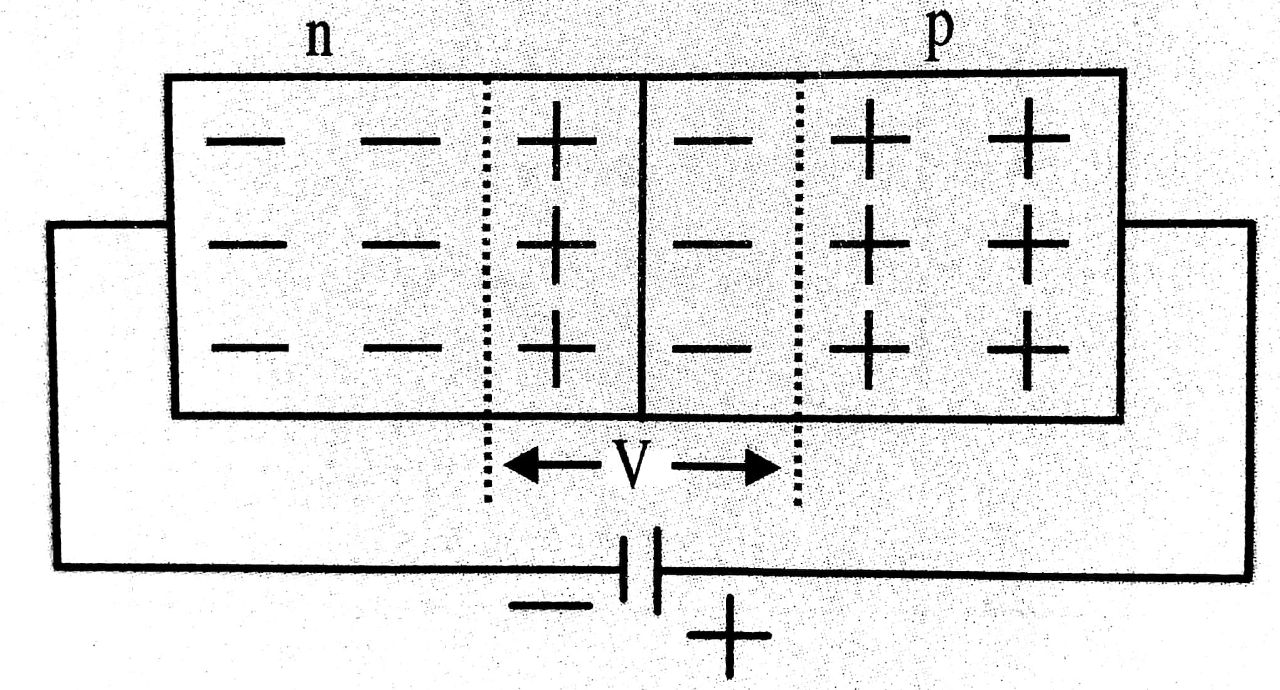 A pn junction is said to be forward if an external battery of emf greater than the potential barrier (Vb) is connected to pn junction in such a way that tive terminal of the external battery is connected to p side and -ve terminal to n-side of the junction diode.
In forward biasing, applied forward potential establishes an electric field which acts opposite to field due to potential barrier. Therefore resultant field is weak end due to which potential barrier is considerably reduced and hence the depletion layer becomes thin. As a result a low resistance path is established for entire circuit. Thus current flows in the circuit. This current is called forward current. 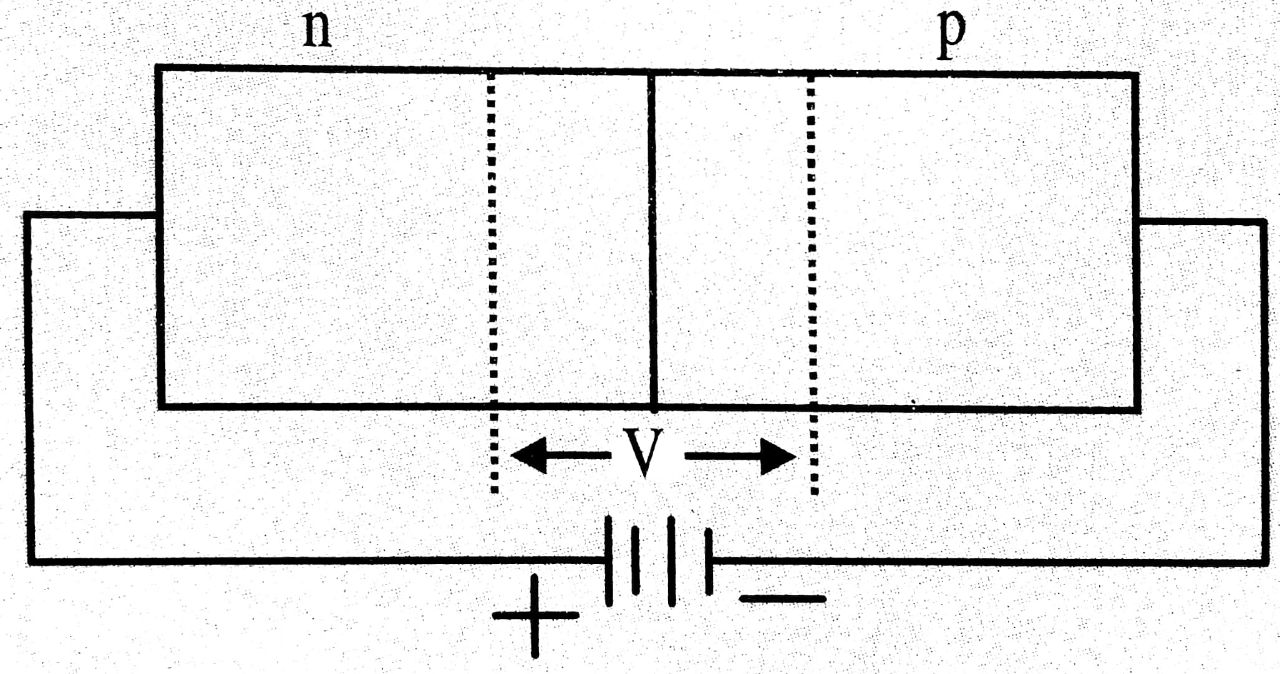 A pn junction is said to be reverse biased if the +ve terminal of external battery is connected to n side of the junction on diode and -ve terminal is connected to p-side of diode.
In reverse biasing, applied reverse voltage establishes an electric field in same direction of potential barrier. The reverse voltage supports it, as a result majority charge carriers are pulled a way from the junction and hence depletion layer increases. Therefore a high resistance path is established for the entire circuit and hence no current flows in the circuit. i.e. in reverse biasing of diode no current does not flows in the circuit. 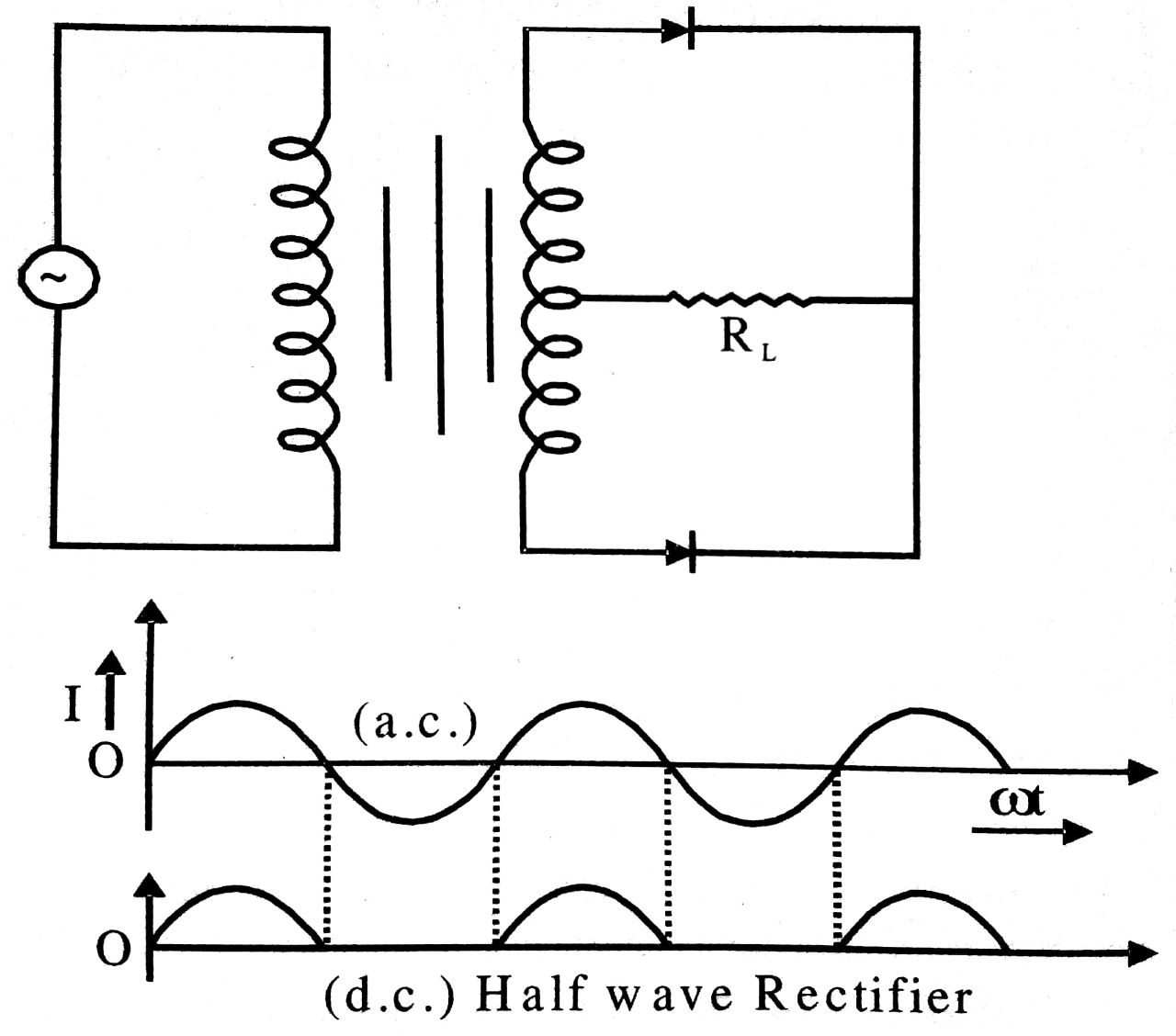 Ans ⇒ Logic gates : These are such circuit which establish a relation between input & output. Mainly there are three OR gates, AND gate and NOT gates. Others are obtained by their combination (NOR, NAND, XOR etc).

AND gate : It is two input & one output gate. It represents the multiplication operation. The Boolean expression for this gate is Y = 4.B which is read as Y equals A and B.

OR gate : It is also two input & are output gate. The Boolean expression for this operation is Y = A + B. It is read as Y equal A OR B.

NOT gate : It is one input & one output gate. It inverses the input. Its Boolean expression = Y = Ā.

In output there is a small circle which is called invert bubble.