11. DUAL NATURE OF MATTER AND RADIATION

Q.2. An electromagnetic wave of wave length λ is incident on a photosensitive surface of negligible work function. If the photo-electrons emitted from his surface have the de-Broglie wavelength λ1, prove that λ = (2mc/h)λ21.

Q.3. Define the terms threshold frequency di stopping potential in relation to the anomenon of photoelectric effect. How is the Fotoelectric current affected on increasing the Í frequency, (ii) intensity of the incident Fadiations and why ?

Stopping potential : It is that minimum negative notential given to anode in a photo cell for which the bhoto electric current become zero.

(i) Photo electric current remains unchanged as is does not depend upon the frequency of the incident light for the same intensity.

Ans ⇒ Threshold frequency : It is the minimum frequency of incident radiation required for photoelectric emission from a metal.

Work function: The amount of energy that must be supplied to an electron in order to just escape from the surface of a metal is called the work function of the metal.

From (i) and (ii), we find that wavelength e.m. radiation is equal to the de-Broglie wavelength of its quantum (photon).

Q.6. What is photoelectric effect ? Write Einstein’s photoelectric equation and use it to explain :
(i) Independence of maximum energy of emitted photo-electrons from the intensity of incident light, (ii) existence of a threshold frequency for emission of photoelectrons.

Ans ⇒ The ejection of electron from a metal surface by falling the radiation of suitable frequency on it is called photoelectric effect. The Einstein’s photoelectric equation is given as
Kmax = h(v–v0)

Q.7. Draw a graph to show the variation of stopping potential with frequency of radiations incidents on a metal plate. How can the value of Plank’s constant be determined from this graph ? 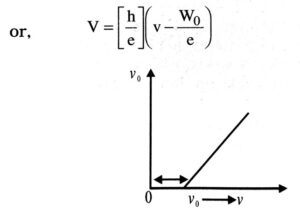 This equation is the equation of a straight line (y = mx + c) with slope equal to h/e and intercept of y axis is equal to W0/e. Thus measuring the slope of the [V0 – v] graph and equating it to h/e, h can be calculated.

Q.9. Obtain the expression for the maximum kinetic energy of the electrons emitted from a metal surface in terms of the frequency of the incident radiation and the threshold frequency,.

Ans ⇒ Consider a photon of light of frequency v, incident on a photosensitive metal surface. The energy of the photon (= hv) is spent in two ways.

(i) A part of energy is used in liberating electron from this metal sufrace which is equal to the work function W0 of the metal.

(ii) The rest of the energy of the photons is used in imparting the kinetic energy of the emitted photoelectron and mis its mass, then 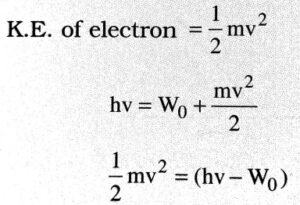 The incident photon is of threshold frequency V0, then incident photon of energy hv0 is just sufficient to eject the electron, from the metal surface without imparting it any K.E. hence

Q.10. Why thermionie emission occurs in metals, why not in non-metals ?

Ans ⇒ In metals there are large number of free electrons while large amount of energy is needed to bring the electrons out from the non-metals, On coating of oxides of metals work function is reduced.

Q.11. Photo electric current is proportional to intensity of light while velocity of photo electrons depends upon frequency of light. Explain.

Ans ⇒ X-rays and γ-rays are electromagnetic wave but the wavelength of γ-rays is 100 times smaller than wavelength of X-rays.
X-rays are produced, when a beam of fast moving electrons strike a solid target where as γ-rays are out come of the disintegration of radioactive elements like Uranium.