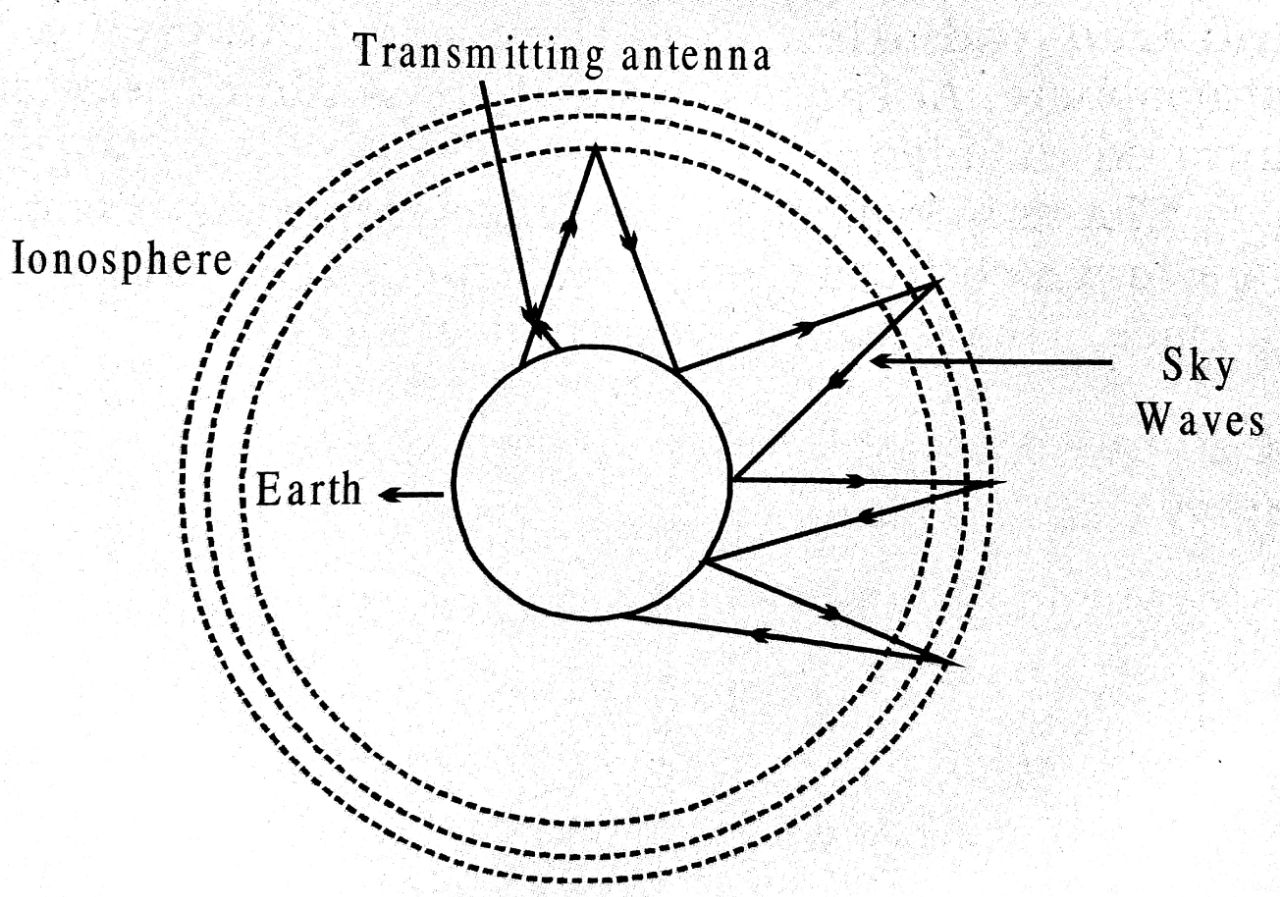 Radio wave having frequency nearly reater than 10 MHz penetrate the ionosphere and are not reflected back by the ionsphere. Therefore, these waves are not propagated through this mode of propagation. Sky wave propagation is useful for every long distance radio communication.

(iii) Space Wave : The high frequency waves (above 30 MHz) called space waves can be transmitted from transmitting to receiving antenna through a mode known as space wave propagation. This mode of propagation is limitted to the line of sight. The transmission of these waves of possible due to their refraction in troposhere.

The propagation of very high frequency (VHF), ultra high frequency (UHF) and microwaves in not possible through ground waves ans sky waves. This is because, VHF and UHF waves are almost absorbed by the surface of the earth after travelling a small distance. Moreover ionosphere is transparent to these very high frequency waves and hence cannot be reflected back by it. Therefore, sky wave propagation is not possible for these waves. To increase the range of the transmission of microwaves, number of antennas are erected as shown in figure.

Q.2. What do you mean by optical communication ?

Ans ⇒ It is a process of communication in which there is transfer of information from one point to the other. In this frequency is of optical range.

Q.3. What do the acronyms ‘LASER’ and ‘LED’ stand for? Name the factor which determines (i) frequency and (ii) intensity of light emitted LED.

(i) The frequencey of light emitted by an LED depends on the band gap of the semiconductor used in LED.

(ii) The intensity of light depends on the doping level of the semiconductor used.

Q.4. Why do we require a satellite for long distance TV transmission ?

Ans ⇒ For long transmission satellite is required because the ionosphere reflects electromagnetic wave of frequency upto a few MHz only. Waves of frequency above 30 MHz can pass through the ionosphere and can reach satellite whose altitude aare much higher than that of the ionosphere. The transponders in a satellite receive these signals and retransmit them towards different ground station.

Q.5. Define the term modulation. Name three different type of modulations used for a message signal using a sinusoidal continuous carrier wave. Explain the meaning of any one of these.

Q.6. How Ozone layer in the top layer of earth’s atmosphere save our life ?

Ans ⇒ In top layer of earth’s atmosphere there is a small ozone layer which absorb ultra violet radiation, X-rays, y-rays, cosmic rays which are very dangerous. These are due to genetic damage of living cells. So this layer prevent the arrival of these harmful radiation on earth and life is saved.

Ans ⇒ The gaseous envelope around the earth is called atmosphere of earth. It mainly contains 78% N2 21% O2, with some argon, CO2, water vapour, hydrocarbon, compounds of sulphur and dust particles. On going at height from earth surface density of atmosphere decreases gradually. There is a no sharp boundary of atmosphere. It is divided into different regions such as Troposphere, Stratosphere, Mesosphere, Ionosphere, Thermosphere etc.

Q.8. What do you mean by modulation and demodulation ?

Ans ⇒ The frequency of sound waves produced by lectures or music are 20 Hz to 20 KHz which are called audio frequency signal. It has small amount of energy. So they cannot be broadcasted for long distances.
To transmit these signals upto large distance there is need of a high frequency radio waves called carrier waves. The process in which A.F. signal is super imposed with R.F. signal for transmission, called modulation.

Modulation is mainly of two types :
(a) Amplitude modulation and (b) Frequency modulation.
At receiving station modulated waves are catched by receiver antenna. The process in which A.F. wave is separated from R.F., wave is called demodulation This work is performed with the help of p-n junction diode as detector or transistor as detector.

Q.9. What do you mean by analog and digital signals ?

Digital signals : Those signals having two levels of current or voltage (0 & 1) called digital signals : In this electronic circuit current and voltage have only two signals (on or off).

Ans ⇒ It is a part of computer composed of IC’s. It processes all the informations coming from the key board. It executes the programes, in computer.

Ans ⇒ Such radio waves whose frequency is greater than T.V. signals are called micowaves. These wavelength is of the order of mm. Due to their short wavelength they can be transmitted in a particular direction. These are used in radar and position of plane is found out from radar station. Microwaves change the concept of telecommunication in recent days.

Ans ⇒ The part of atmosphere which is extended from 80 km to 400 km is called ionosphere. This plays chief role in radio wave transmission. It reflects electromagnetic waves of radio frequency. In radio astronomy it is used as an obstacle because maximum part of radiowaves are reflected by ionosphere.