Q.2. Explain the formation of potential barrier and depletion region, in p-n junction. 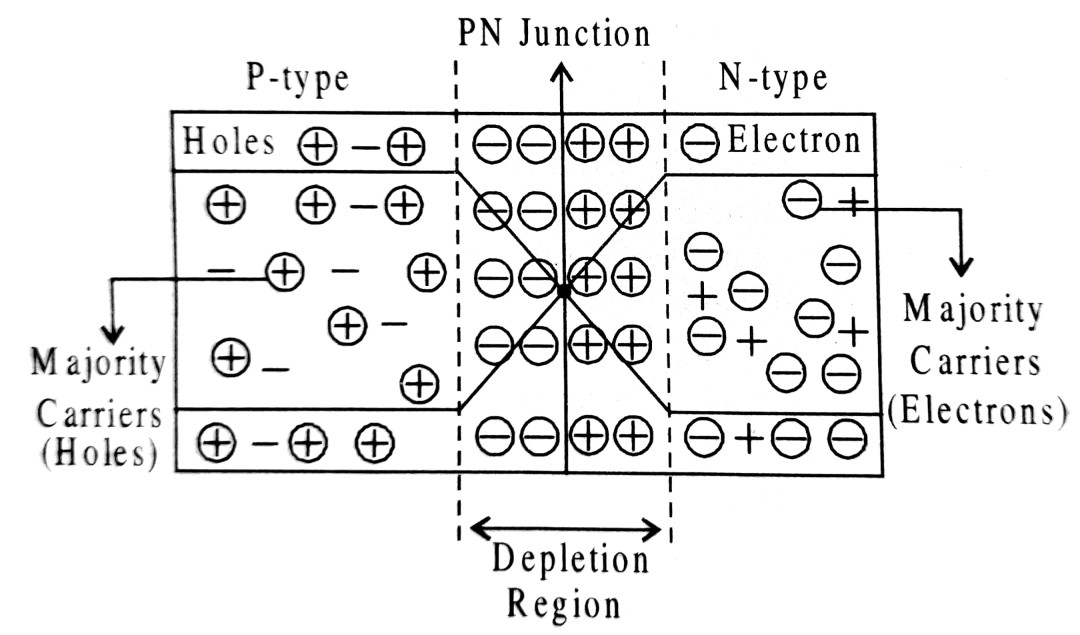 -ve charge. The process of migration of charge carriers go on till a region as shown in the adjoining figure is formed which further stops the cross over of electrons and holes. This region is known as depletion layer or depletion region. Thickness of this layer is about 10-3 m. The recombination of holes and electrons near the junction results into accumulation of +ve and -ve charges near the junction. Thus a potential difference occurs near about the junction. The value of this potential difference is about 0.5V. Since this potential does not allow further recombination of holes and free electrons, therefore, it is known as potential barrier.

Q.4. Draw the energy band diagram of (i) n-type and (ii) p-type semiconductor. State whether the ideal diode shown is forward biased or reverse biased and find the voltage it.

Ans ⇒ It is the process of mixing impurity in a semiconductor. Germanium is tetravalent if a pentavalent material is mixed in it then newly formed material is n-type. Ge+ Arsenic (impurity).
Similarly, by mixing indium with germanium p type semiconductor is formed.

Ans ⇒ In valence energy band there are electrons. It is partially or fully filled with electrons. It is never vacant. In this band electrons have no capacity to take electrons from outer electric field. Electrons present in this band does not contribute to flow of electrons.
In conduction band electrons are rarely present. It is partially filled with electrons or completely empty. Electrons in this band receives energy from electric field. They contribute in flow of electric current.
In forbidden energy gap electrons are not present. It is fully empty. To shift electrons from valence band to conduction band energy is needed which is called band gap energy (Eg).

Ans ⇒ It is short form of light emitting diode. Its action is based on conversion of electric into light energy. It is generally p-n junction diode in which gallium arsenide or indium phosphide is used as semiconductor.
Due to combination of holes and electrons at junction, energy is librated. In this process light emitted by it is of visible range (wavelength). It is generally used in burglar alarm, calculators, pilot lamps, telephone, digital watches and in switch board.

Q.8. n-p-n transistors are used more than that of p-n-p transitors. Why ?