Q.3. State the principle and working of a cyclotron. Write two uses of this machine.

Ans ⇒ A positive ion can be accelerated to a very high energy by making it to pass through a moderate electric field again and again by making use of a magnetic field.
It is used to implant ions into solid and modify their properties. It is also used in hospitals to produce radioactive substance.

Q.4. Give the formula for the magnetic field produced by a straight infinitely long current carrying wire. Describe the lines of field in this case. 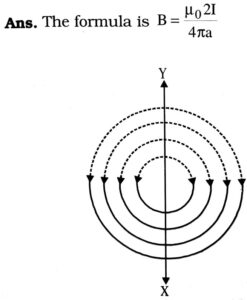 Q.6. A particle of mass ‘m’ with charge ‘q’ moving with a uniform speed ‘v’ normal to a uniform magnetic field ‘B’ describes a circular path of radius r. Derive expressions for the (i) time period of revolution and (ii) kinetic energy of the particle. 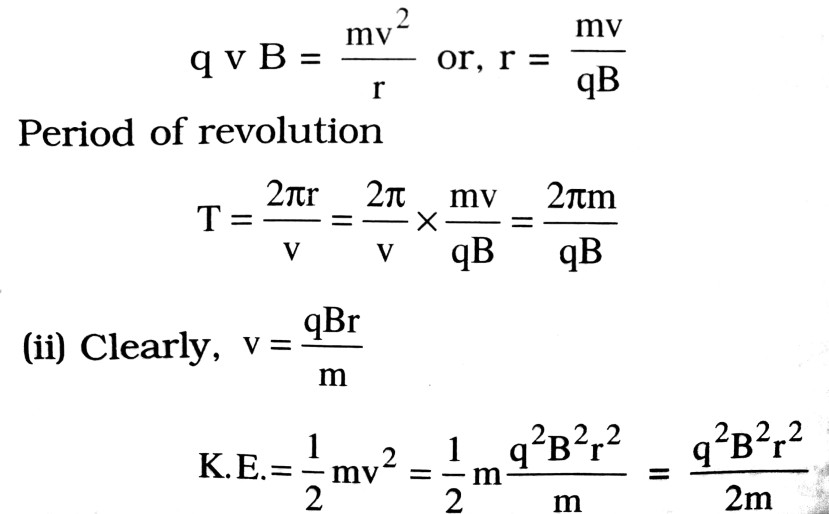 Q.7. In what respect does a wire carrying a current differ from a wire, which carries no current ?

Q.8. In what ways electric and magnetic field are different ?

(ii) The strength of electric field at a point decreases with the dielectric medium but the strength of magnetic field increases when a permeable medium is inserted there.

Q.9. How does (i) an ammeter (ii) voltmeter differ from a galvanometer ?

Q.11. (a) State Ampere’s Law connecting the line integral of B over a closed path to the net current crossing the area bounded by the path.

(b) Use Ampere’s Law to derive the formula for magnetic field due to an infinitely long straight current-carrying wire.

(c) Explain carefully why the some derivation as in (b) is not valid for magnetic field in a plane normal to a current-carrying straight wire of finite length and passing through the mid-point of the wire.

→
Ans ⇒ (a) Ampere circuital law states that the line integral of magnetic field B round any closed path is μ0 times the current threading the closed path mathematically. 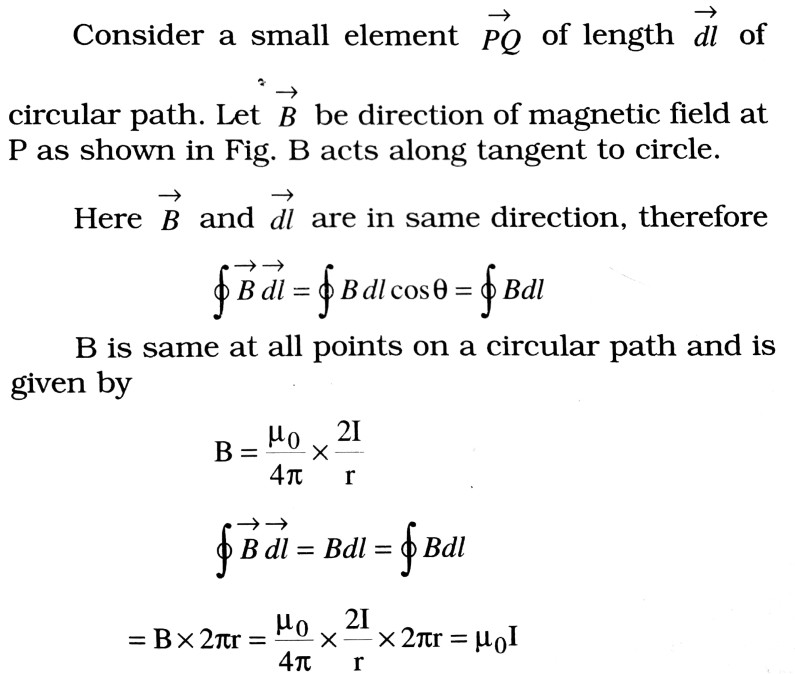 Hence Ampere Circuital Law is proved.
(c) A straight conductor of finite length cannot by itself form a complete steady current circuit. Additional conductors are necessary to close the circuit. These will spoil the symmetry of the problem. The difficulty disappears if the conductor is infinitely long.

Q.12. A cyclotron is not suitable to accelerate electrons Why ?

Ans ⇒ When an electron is accelerated in a cyclotron very soon it acquires a very high velocity. Due to which its mass increases with velocity according to relation

Therefore the time taken by electron to describe semicircular path inside the dee of a cyclotron, t = m /Bq. also increases with the increase of m. Due to which the electron does not arrive in a gap between the two dees exactly at the instant when the polarity of the two dees changes. Due to which the electron goes out of step with the oscillating electric field and hence cannot be accelerated by cyclotron.

Q.13. Why should a voltmeter have a high resistance and a low current carrying capacity ?

Q.14. Why should an ammeter have a low resistance and a high current carrying capacity ?

Ans ⇒ The self inductance of a coil is the magnetic flux linked with it when unit current flows through it. Its ‘Sl’ unit is Henry.

Q.16. An electron moving through a field remains undeflected. Is it possible that there is no magnetic field ?

Ans ⇒ As Ampere’s circuital law states that the line integral of magnetic field is the current threading the loop.