Q.1. Two electric lines of force cannot intersect each other. Why ? Sketch the lines of force for two equal negative charges q1 and q2 placed at points A and B, separated by a small distance in air.

The sketch of lines of force of two equal negative charges q1 and q2 placed at A and B separated by a small distance in air is shown in the figure.

Q.2. In a double slit interference experiment, the two coherent beams have slightly different intensities I and I + δI (δI << I). Show that the resultant intensity at the maxima is nearly 4I while that at the minima is nearly

Ans ⇒ The intensity due to constructive and distructive superposition are respectively,

Q.3. What are coherent sources of light ? When two slits in Young’s double slit experiment are illuminated by two different sodium lamps emitting light of the same wavelength. Then it is no interference pattern observed why ?

Ans ⇒ Sources of light which emit waves of zero or constant phase difference between them are called coherent sources. Coherence can not be obtained from two independent sources because their phase difference does not remain constant.

Q.4. How can spherical aberration be minimized ?

Ans ⇒ The magnitude of spherical aberration for a lens depends on the radii of curvature and the object distance. It can be minimized by the following methods

(a) By using a diaphragm in front of the lens to reduce its effective aperture. It allows only a narrow pencil of rays to pass through the lens. However, a sharper image is obtained at the cost of the brightness of the image.

(b) Spherical aberration can be reduced by proper choice of curvatures of the lens surface.

Q.5. Explain the essential difference between interference and diffraction.

Q.7. What is diffraction of light ? Draw a graph showing the variation of intensity with angle in a single slit diffraction experiment. Write one feature which distinguishes the observed pattern from the double slit interference pattern.
How would the diffraction pattern of a single slit be affected when :
(i) The width of the slit is decreased ?
(ii) The monochromatic source of light is replaced by a source of white light ?

Ans ⇒ Diffraction of light : Phenomenon of bending of light round the corners of an obstacle or aperture is called diffraction. Fig. showing the variation of intensity with angle in single slit diffraction experiment.

In diffraction pattern, the brightness of successive bright fringes from the centre goes on decreasing whereas in interference pattern all bright fringes are equally bright and have the same width.

Width of central maxima = 2λD/d
(i) When the width of slit (d) is decreased, angular width increases.
(ii) When the monochromatic source of light is replaced by source of white light, the diffraction pattern is coloured. The central maxima is bright but other bands are coloured. Since band width αλ.
∴             βred  >  βviolet

Q.8. What is interference of light ? Write two essential conditions for sustained interference pattern to be produced on the screen.
Draw a graph showing the variation of intensity versus the position on the screen in Young’s experiment. When (a) both the slits are opened and (b) one of the slits is closed.
What is the effect on the interference pattern in Young’s double slit experiment when :
(i) Screen is moved closer to the plane of slits ?
(i) Separation between two slits is increased. Explain your answer in each case. 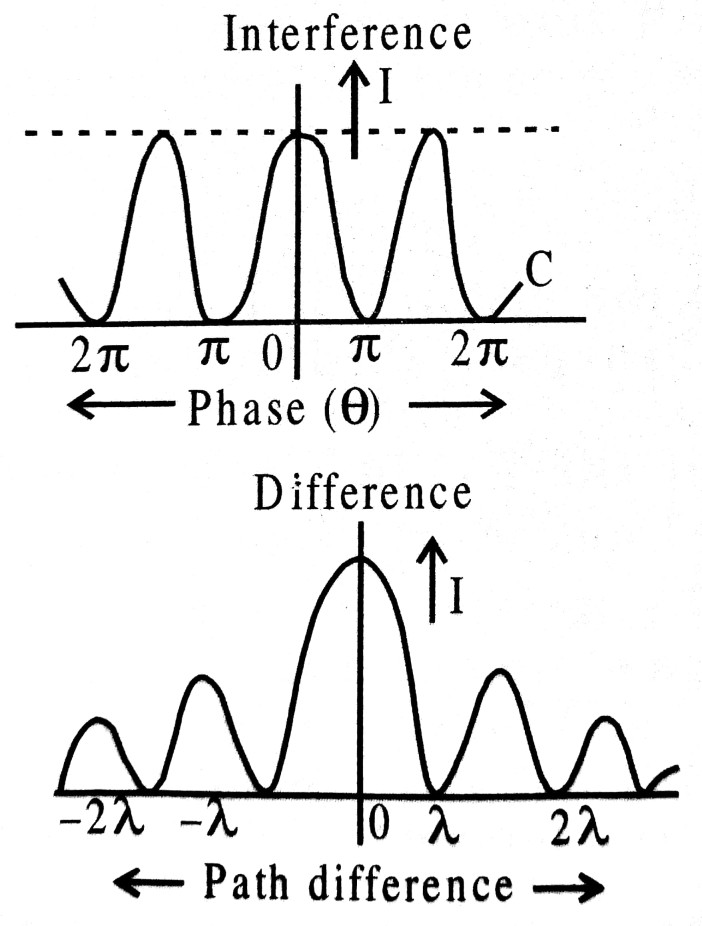 (i) The two sources should be produce wave of same wavelength.
(ii) The two sources should be coherent.
(iii) Amplitude of two wave should be either equal or nearly equal.
The Figures shows the variation of intensity verses position Young’s experiment.
(a) When both the slits are opened.
(b) If we close one of the slits, diffraction pattern is obtained
Fringe width is given by
β = λD/d, Therefore
(a) When screen is moved closer to the plane of the slits, width decreases (β α D).
(b) When separation between two slits, increases, the fringe width will decrease. 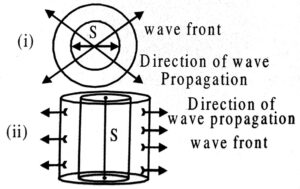 Ans ⇒ Postulates : Every point on primary wave front acts a source of secondary wavelets, the forward envelope of which given new wave-front.

Q.10. What are coherent sources ? How does the width of interference fringes in Young’s slit experiment change when
(a) the distance between the slits and screen is decreased ?
(b) frequency of the source is increased ? Justify your answer in each case,

Ans ⇒ Two sources which produce waves of some frequency with zero or constant phase difference between them are called coherent sources.

Q.11. In deriving the single slit diffraction pattern, it was stated that the intensity is zero at angles of nλ/a. Justify this by suitable dividing the slit to bring out the cancellation.

Therefore, each of the n slits of width a each sends zero intensity in the direction θ. As a result, the net resultant of intensity due to n such slits is zero.

Ans ⇒ The colour of central fringe is white because all the waves constructively interfere at this point.

Shows that violet colour will be nearest to central fringe.

Q.14. What do you mean by polarization of light?

Q.15. Why red signals are used as danger sign ?

Ans ⇒ According to Rayleigh’s scatting formula the entering of scattered light is proportional to the fourth power of wavelength λ of light.

In the spectrum of visible light wavelength of red component is maximum, hence due to less scattering red right is observed from very long distance.