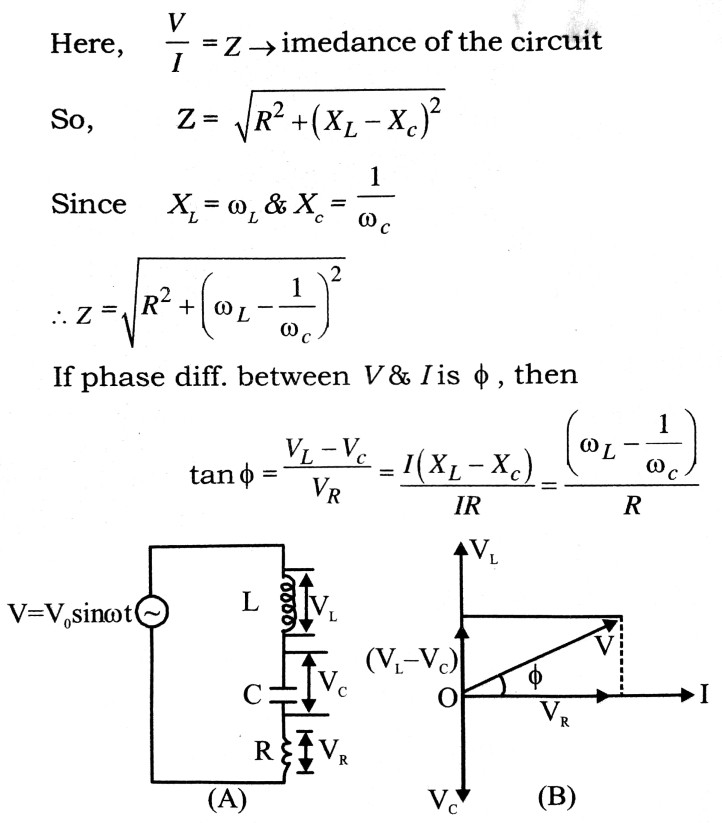 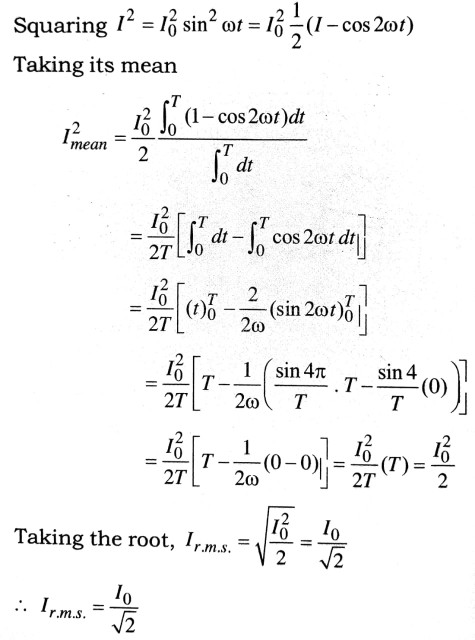 Q.3. What are step up and step down trans formers ? Give the theory of a transformer and discuss its working. Describe the various losses occuring in a transformer. How are they reduced ? 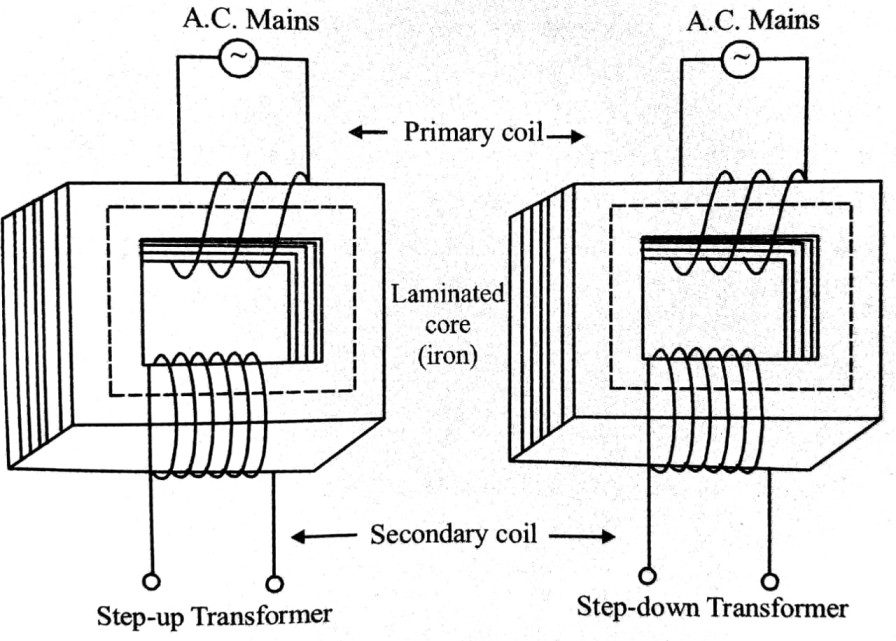 … (i)
where k is called the transformer ratio. Thus,
.

Thus, when the voltage is stepped up, the current is correspondingly reduced in the same ratio, and vice-versa.
However, if the primary circuit has an appre ciable resistance KP, the difference between the applied voltage Ep and the back e.m.f. εp must be equal to the potential drop ip x Rp, in the primary coil i.e.
Ep – εp = ip x RP
εp = EP – eP x RP
Again, if the secondary circuit is closed having finite resistance (load) Rs, a part of the induced e.m.f. εs in the secondary overcomes the potential drop is x Rs, so that the available potential difference across the secondary is given by
. 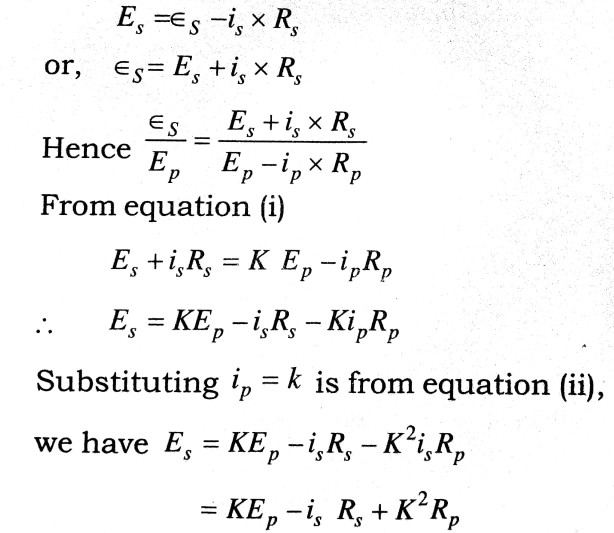 is not a constant but decreases with increase in load or drawing more current in the secondary circuit.

(a) Copper losses : As the alternating current flows through the primary and secondary, heat is developed in side the copper turns. This waste of en ergy is known as copper losses.

(b) Eddy current losses : Eddy currents are set up in the iron core of the tranformer, and these gen erate heat, with consequent loss of energy. To minimise these losses the iron ore is laminated by making it of a number of thin sheets of iron insu lated from each other, instead of making it from one solid piece of iron.

(c) Hysteresis losses : During each cycle of A.C. the core is taken through a complete cycle of magnetisation. The energy expanded in this process in finally converted into heat and is therefore wasted. This loss is minimised by using the core of a mag netic alloy for which the area of the hysteresis loop is a minimum.

Q.4. Explain the terms or derive expression for Power and power factor in an A.C. Circuit. Describe experimental measurement of power factor.

Ans ⇒ Power and Power Factor in an A.C. Circuit : The power in an electrical circuit is the rate at which electrical energy is consumed in the circuit, and is equal to the product of the voltage and the current. In an A.C. circuit the instantaneous value of the voltage and current are given by E = E0 sinωt and i = i0 sin(ωt – φ) where φ is the phase difference between current and voltage.
Hence the power in an A.C. Circuit at any instant
. 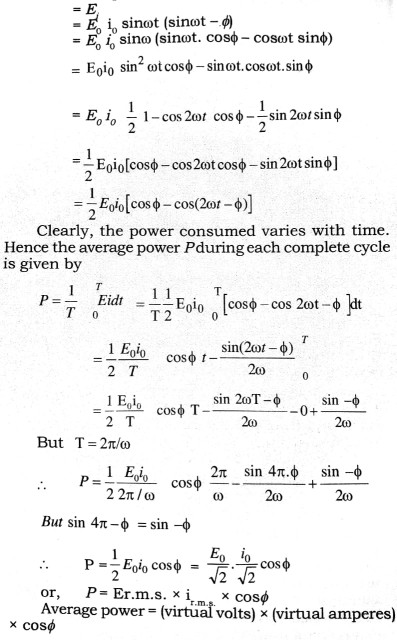 As cosø is the factor by which the product of the r.m.s. values of the voltage and current must be multiplied to give the power dissipated, it is known the power factor of the circuit. The value of coca depends on the nature of the circuit. For a circut containing pure resistarice, φ = 0), so that cosφ = 1. Por a circuit containing resistance, capacitance and in series, we have
. 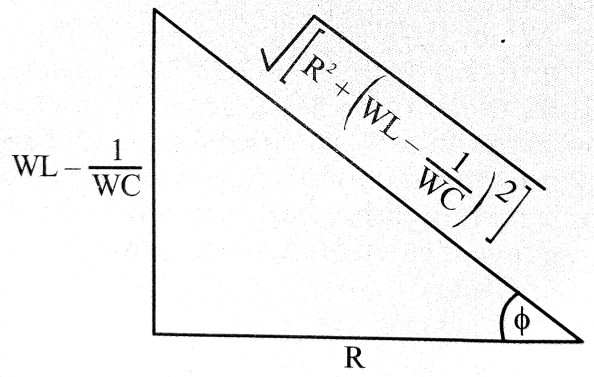 Experimental Measurement of Power Factor : The experimental arrangement and the circuit diagram of measurement of power factor of given load is as shown in figure. An ammeter A, a voltmeter V, wattmeter Wand A.C. source E with the given load is connected as shown in figure. The reading of volt meter, ammeter and wattmeter is noted down as V volts, i amperes and Pwatts respectively. The virtual power is given by (V x i) watt. 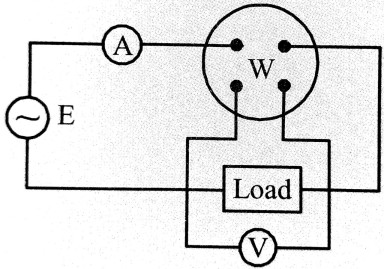 Therefore the power factor of given load = P/V x i