Q.1. State and explain Biot-Savart Law. Find an expression for magnetic induction at a sistance from a straight wire of infinite length.

at a point positioned

relative to a current

as its source. În vector form, the law may be written as 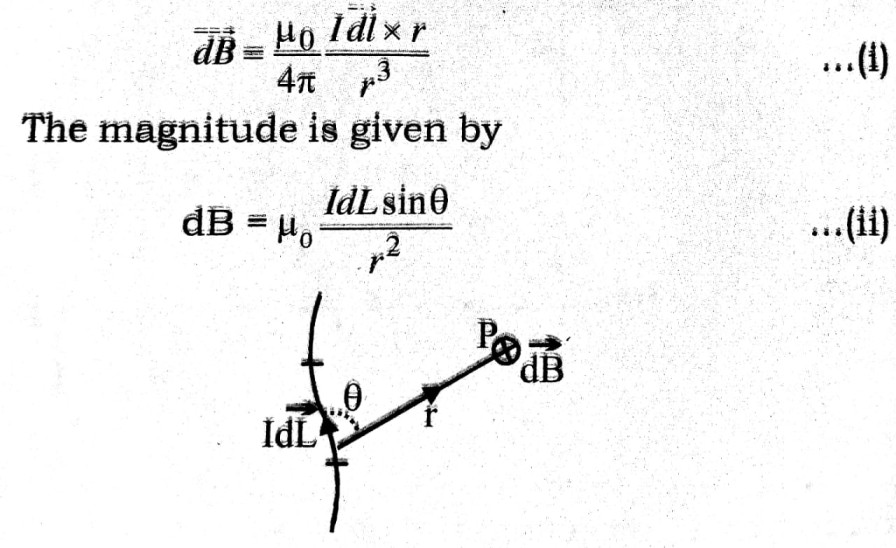 In the figure, the position vector of a point p relative to current element

The magnetic induction at P will have a direction along

and magnitude porportional to Idl sinθ and inversely proportional to r2. Both these results are expressed in vector form in equation (i)

due to infinite wire : If we sprinkle iron filings around a current carrying wire ofinfinite length, they are arranged in circles. The direction of

is tangential to these circles.
Let a point P be at a dicxtance r from the wire. Computing line integral of 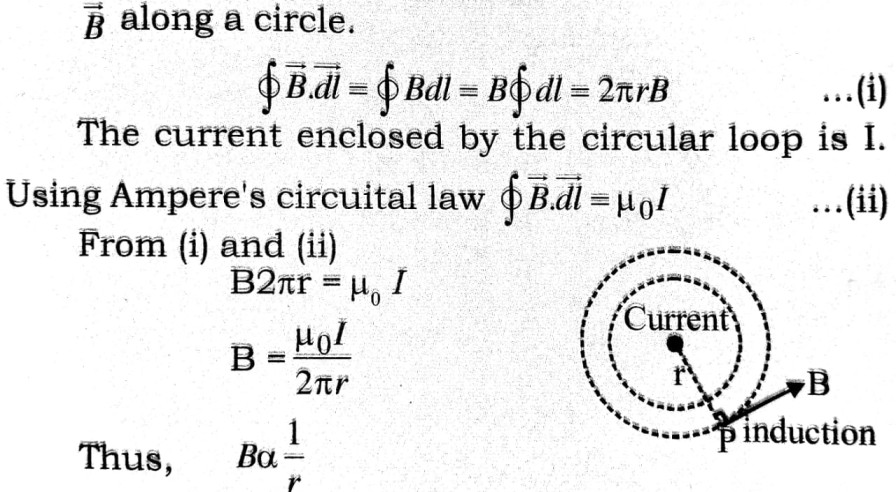 This expression for magnetic force field due to current element is mathematical form of Biot-Savart Law. This also gives laplace’s law. 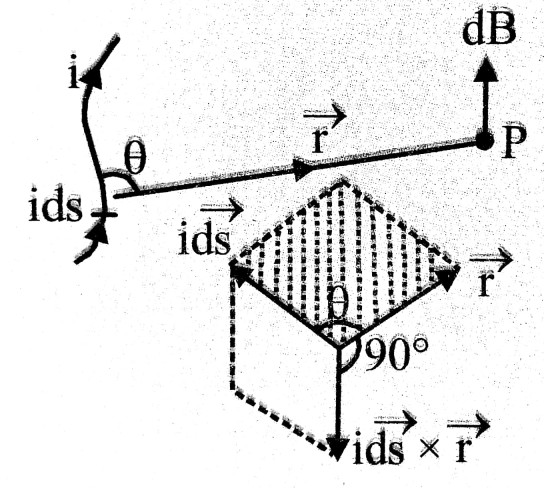 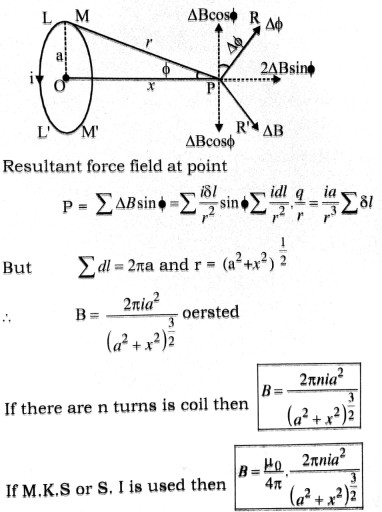 Torque on a current loop placed in magnetic field : Let there be a rectangular loop PQRS which is suspended between pole pieces N & S of a strong magnet. The magnetic field is B. 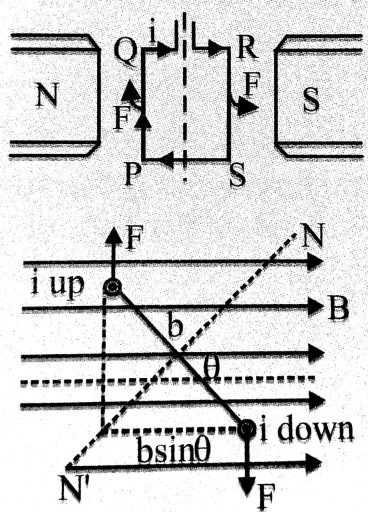 Length of loop is PQ = RS = l and breadth is QR = SP = b. If strenth of current flowing in loop is l then a force acts on coll carrying curent placed in a magnetic field. The current loop will experience a force on its each arm. Its direction is given by Fleming left hand rule. Let axis of current loop makes an angle with direction of magnetic force field (B).
So torque acting on current loop is given by
τ = F x ⊥ distance = BIl x b sin θ = IBl x bsin =

Q.3. What is a cyclotron ? Explain its working with the help of a diagram. 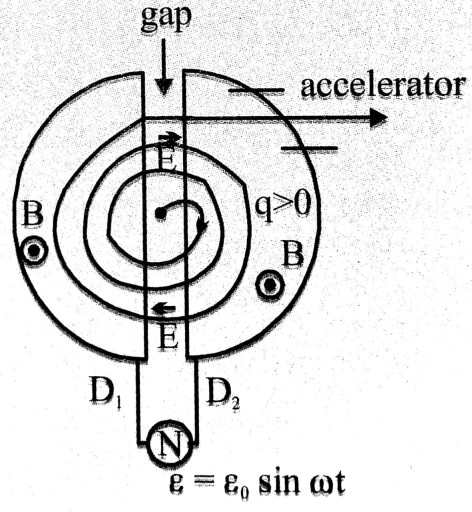 Action: A cyclotron is schematically shown in the figure. Source of particles sends charged particle in D-type vessel D2. A perpendicular magnetic field

In the D-vessel. It circulates the particle, Moving half of a circle in D2, the particle enters the gap where electric field ‘accelerates’ it by a force

The speed is increased and hence the radius also increases as

the particle enters with increased speed and radius. As the periodic time T

is independent of speed, it competes half circle in D1 and enters the gap. In the mean time, Ē in the gap has reversed direction and thus accelerates the particle to higher speed, In this way the particle accelerates and gains kinetic energy, At the end, it is deflected by deflectors and thrown out with high speed.
If the final radius of its path be R, R = mv/qB

The particle comes out of the cycotron with this kinetic energy. The cyclotron is thus a particle accelerator.

Q.4. What is shunt ? Derive explression for the current passing through the galvenometer and the shunt. Mention Universal shunt. 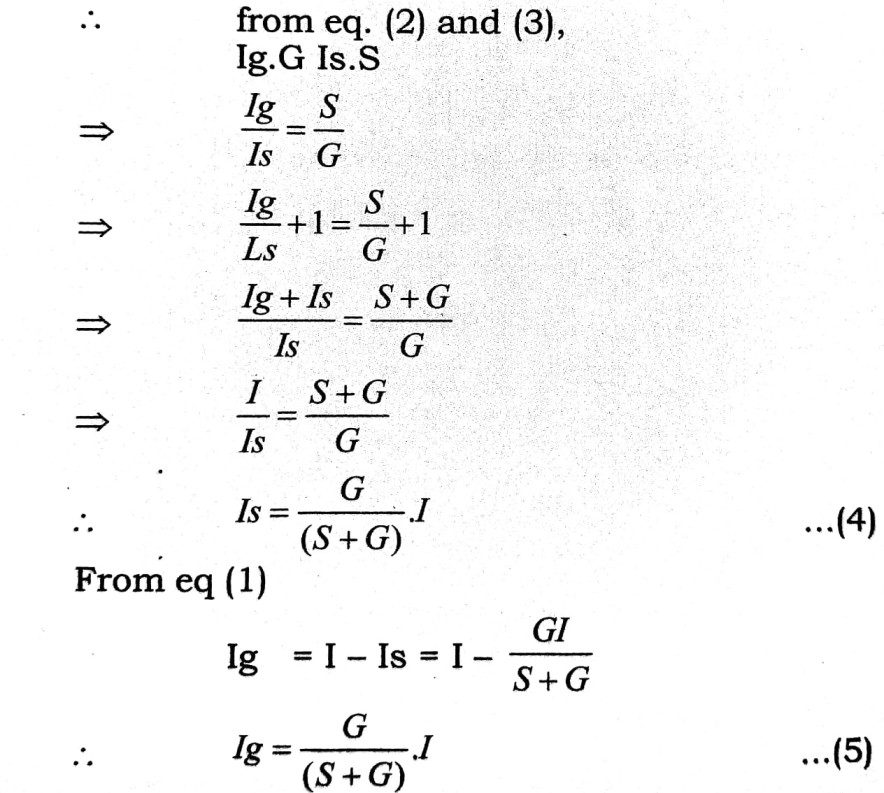 Universal Shunt : It is a series of resistance connected parallel to galvenometer so that
1/100th or 1/100th times the main current is passed through the galvenometer by changing the rocker only.