(ii) Molality : The moles of the solute dissolved in one kilogram of the solvent is called the molality of the solution.

where wA = Mass of solvent in kg.

(iii) Molarity : The concentration expressed as the moles of solute per litre of solution is the molarity. It is denoted by M.

Q. 2. Which type of deviation is shown by the solution formed by mixing cyclohexane and ethanol ?

Ans⇒ Hydrogen bonds exist among the molecules of ethanol (i.e., strong forces). When cyclohexane is added to ethanol, the cyclohexane molecule will come in between the ethanol molecules and disturb the hydrogen bondings. The forces between ethanol and cyclohexane will be weaker than the previous forces (H-bonding), hence there will be positive deviation.

Ans. (a) Reverse osmosis : If external pressure greater than osmotic pressure applied on solution, the flow of solvent molecules can be made proceed from the solution towards pure solvent. This type of osmosis is termed as reverse osmosis. Reverse osmosis is used for the distilation of sea water for getting fresh drinking water.

Q. 4. What do you mean by abnormal molecular mass ? Explain the factors with suitable examples which bring about the abnormality ?

Ans⇒ Molecular masses of the solutes which are inversely proportional to the colligative properties must have different values from their normal values. In other words, these are abnormal in nature and also called observed molecular masses.

In certain solvents (generally non-polar) the particles of the solute undergo association i.e., two or more molecules of solute combine to form a bigger molecule. As a result, the total number of

For example, in benzene solvent, both acetic acid and benzoic acid exist as dimers because of the presence of intemolecular hydrogen bonding.

(a) If a volatile solute is dissolved, vapour pressur of the solvent is increased.

(b) However, if a non-volatile solute is dissolved 11 it, the vapour pressure of the solution is lowered. In is because, in a solution, the percentage of the volatilo solvent molecules, which only contributes towards vapour pressure is diminished.

Since, the solute molecules are non-volatile and show no measurable tendency to escape from the solute as vapour, consequently, the vapour pressure of a solution is always lower than that of its solvent.

Decrease in vapour pressure when a
non-volatile solute is added to the solvent.

Raoult’s law gave a relation between the relative lowering of vapour pressure and the mole fraction of the solute. Mathematically :

(mole fraction of the solution)

Now according to Rauolt’s law

where nA and nB are no. of moles of solvent and solute respectively.
For a very very dilute solution. 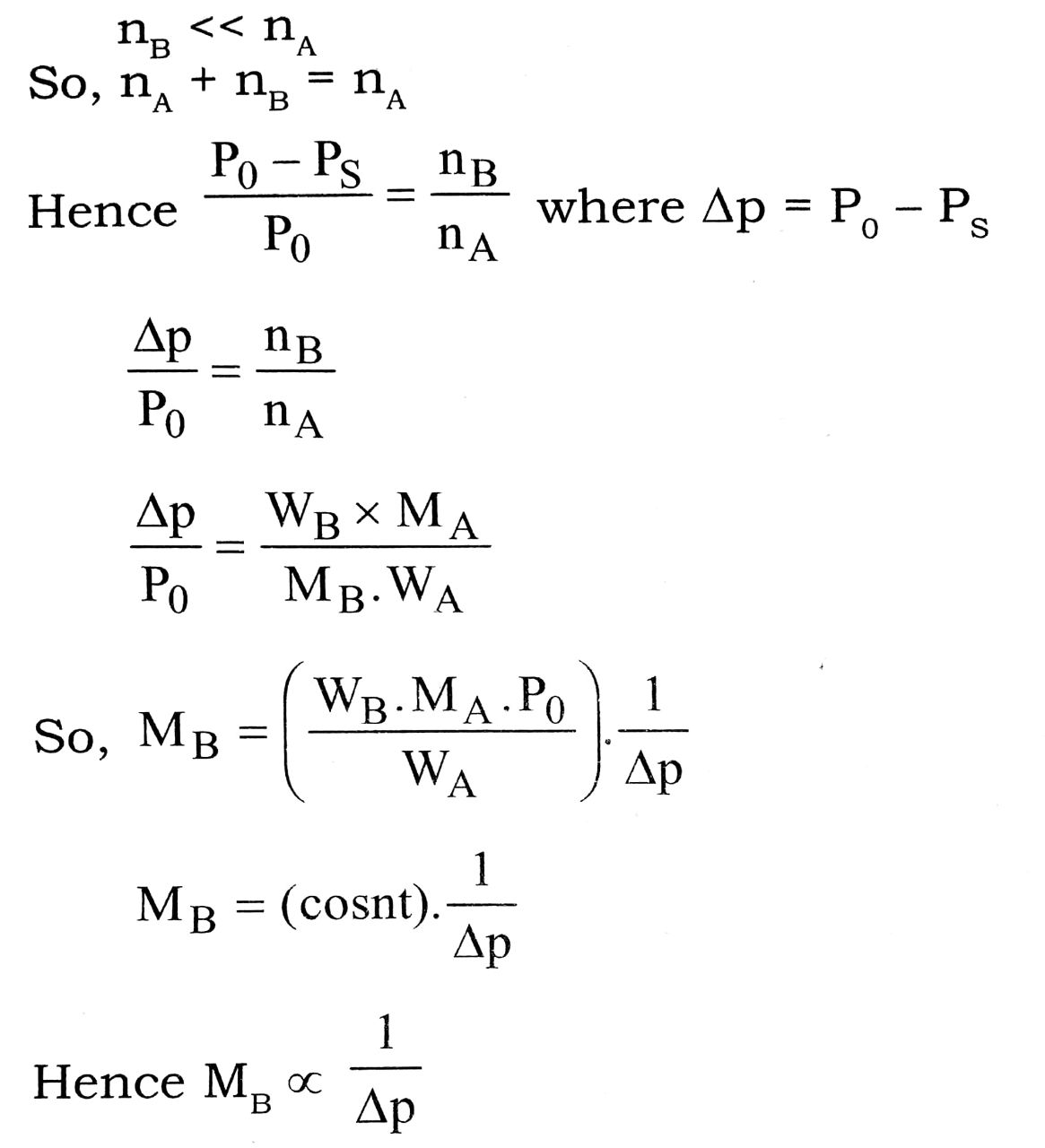 Ans⇒ Henry’s Law : Effect of pressure on solubility of gases in liquids at a particular temperature is given by Henry’s law. “The mass of a gas dissolved in a given volume of the liquid at a constant temperature is directly proportional to the pressure of the gas present in equilibrium with the liquid.”

p = Pressure of the gas in equilibrium with the solvent

Some important applications of Henry’s law :

1. To increase the solubility of CO2 in soft drinks and soda-water, the bottle is sealed under high pressure.

Q. 16. The depression in freezing point of water observed for the same amount of acetic acid, trichloroacetic acid and trifluoroacetic acid increases in the order given above, Explain briefly.

Ans⇒ The lowering of vapour pressure of freezing point compared to that of the pure solvent. The freezing point of a Substance, the solid phase is in dynamic equilibrium with the liquid phase.

According to Raoult’s law, when a non-volatic solid is added to the solvent its vapour decreases and it would become equal to that of solid solvent at lower temperature. The freezing point of the solvent decreases.

Depression Constant : The unit of Kƒ is K kg. mol-1 values of Kf for some common solvent acetic acid are listed in this way. If W2 gram of the solute having molor mass as present in W1 gram of solvent produces the depression in freezing point ΔT1 of the solvent then molality,

The Solute is as

Ans⇒ Osmotic pressure : The excess pressure is exerted on the surface of solution to just prevent osmosis is called osmotic pressure. It depends upon the molal concentration. Hence it is a colligative property.

According toVan’t Hoff π ∝ C (at constant temp.) and π ∝ T (At constant concentration).
Both laws are combined, we have