Q. 1. Define ‘energy of activation of a reaction. How does it vary with a rise in temperature ?

Q. 2. State and explain Arrehenius equation. How can we determine the activation energy of a reaction using this equation ?

where k is rate constant, A is Arrhenius of frequency factor, Ea is energy of activation, T is absolute temperature. This equation is called Arrhenius equation.
Taking log, we get

Plot of log k versus 1/T is a straight line with a negative slope. The slope of the line is equal to

Q. 3. Explain the relationship between the rate of production of iodine and rate of disappearance of hydrogen iodide in the following reaction ?

Ans⇒ Rate of disappearance of HI =

Rate of appearance of I2 =

From the chemical equation,

Rate of production I2 =

× Rate of disappearance of HI

Half-life period of a chemical reaction is defined as a time period during which the concentration of a reactant is reduced to half of the initial value of concentration.
It is denoted by t1/2 or to.5.

The rate equation for a reaction of first order in expressed as :

On substituting these values, we get

The relation (i) is the required expression for half life period of first order reaction.

Q. 5. Express the rate of each of the following reaction in terms of disappearance of the reactants and appearance of products : 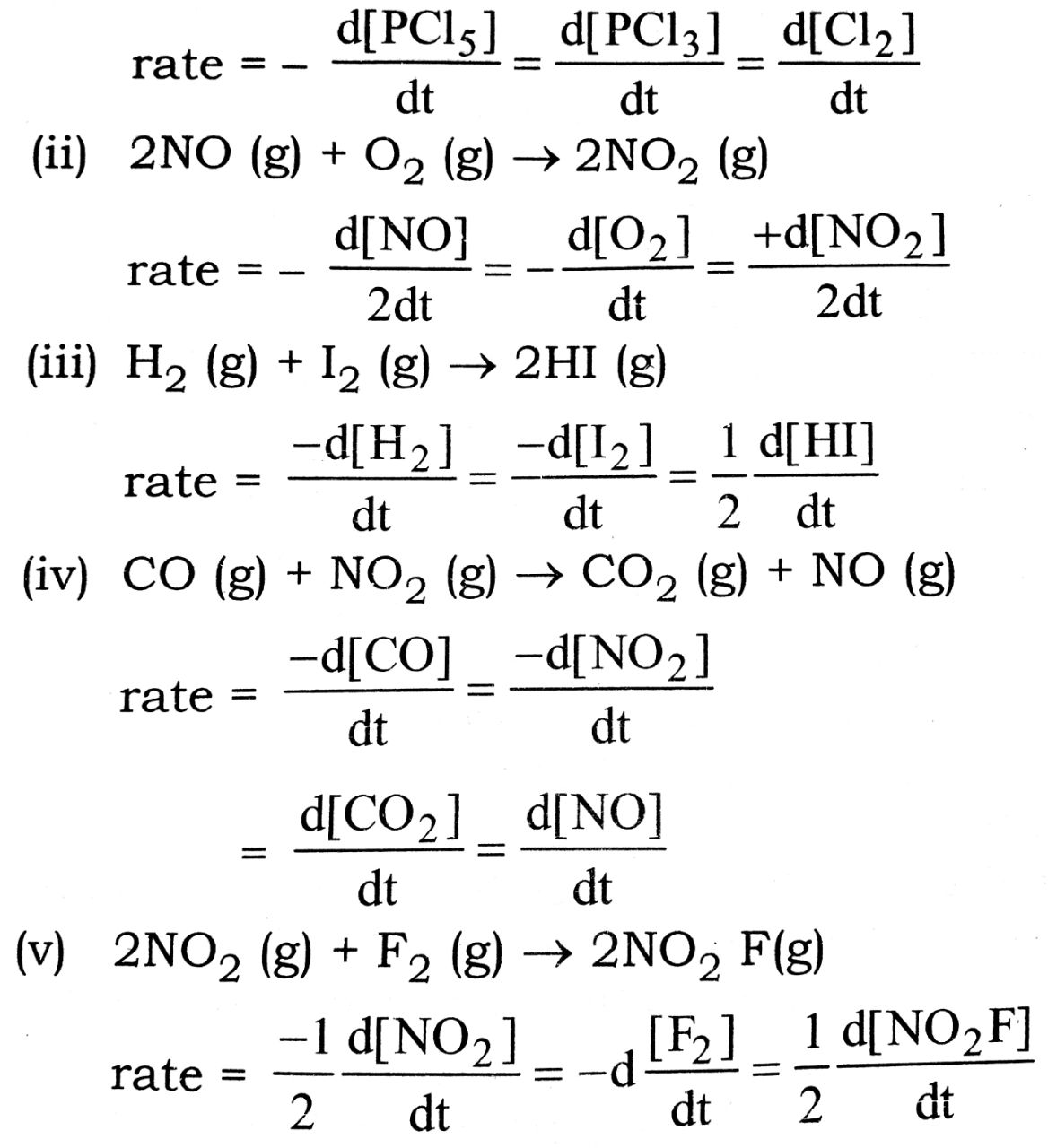 is supposed to the following mechanism :

(i) However, NOBr2 is an intermediate and thus its concentration should be replaced from equation (i) From step (i),

Q. 7. (a) Define half life period of a chemical reaction. Write equation of t1/2 for a first order reaction.

(b) A first order reaction is 75% complete in 60 minutes. Find the half life of this reaction.

Ans⇒ (a) The time during which half of the reactant is converted into the products is called half life period of the reaction. It is represented by t1/2.

for a first order reaction is t

Time required (t) = 60 min
Them for a first order reaction.

(i) For reaction to occur, there must be collision between the reacting species.
(ii) Only a certain fraction of total collisions are effective in forming the products.
(iii) For effective collisions, the molecule must possess the sufficient energy (equal or greater than threshold energy) as well as proper orientation.

On the basis above conclusions, the rate of reaction is given by
Rate = f × 2 (where fis the effective collisions and is total number of collisions per unit volume per second)
Quantitatively, the effect of temperature on the rate of a reaction and hence on the rate constant k was proposed by Arrhenius The equation called Arrehenius equation is usually written in the form

where A is a constant called frequency factor (because it gives the frequency of binary collisions of the reacting molecules per second per litre. E0 is the energy of activation, R is a gas constant and T is the absolute temperature. The factor e-Ea/RT gives the fraction of molecules having energy equal to or greater than the activation energy, Ea.

The energy of activation (Ea) is an important quantity and it is characteristic of the reaction. using the above equation, its value can be calculated.

Taking logarithm or both sides of equation (i), we get,

Thus knowing the values of the constant k, and k2 at two different temperature T1 and T2, the value of Ea can be calculated.

Q. 9. (a) What do you mean by zero order reaction ? How the value of rate constant is determined ? What is the relation between rate constant and half-life period ?

(b) Give two examples.
(c) What are the factors on which the rate of reaction depends ? Discuss each factor in brief.

On integration of equation we get

Put the value of constant in equn. (i) we get

When a plot is drawn between concentration of reactant (R) and time t, a straight line is obtained, slope of which gives the value of – k and intercept on y-axis is equal to the value of ‘[R]°.

Half life period is the time period

to reduce the initial concentration
of the reactant to half of its initial value.

(c) The rate of reaction depends upon the following factors :
(i) Concentration of the reactants : Greater the concentration faster is the reaction.

(ii) Presence of catalyst: It increases the speed of the reaction by lowering the activation energy.

This is because of the increase in the number of effective collision with rise in temp.

(v) Nature of reactants: With change in reactants rate of reaction changes.

Ans⇒ It is sum of the power of indicus of reacted terms no. of molecules which tke part in a chemical ribs known as molecularity of reaction.

(b) Difference between Rate of a reaction and Rate constant :

5. Pressure of a catalyst : A catalyst generally increases the speed of the reaction without itself being consumed in the reaction. In case of reversible reactions a catalyst helps attain chemical equilibrium quickly without disturbing the state of equilibrium. It speeds up the reaction both in the forward as well as backward direction so the equilibrium is attained earlier.

Such reactions are called Photo-Chemical Reactions.

Q. 12. Calculate the half life of a first order reaction from their rate constants give below :

Ans⇒ For the first order reaction 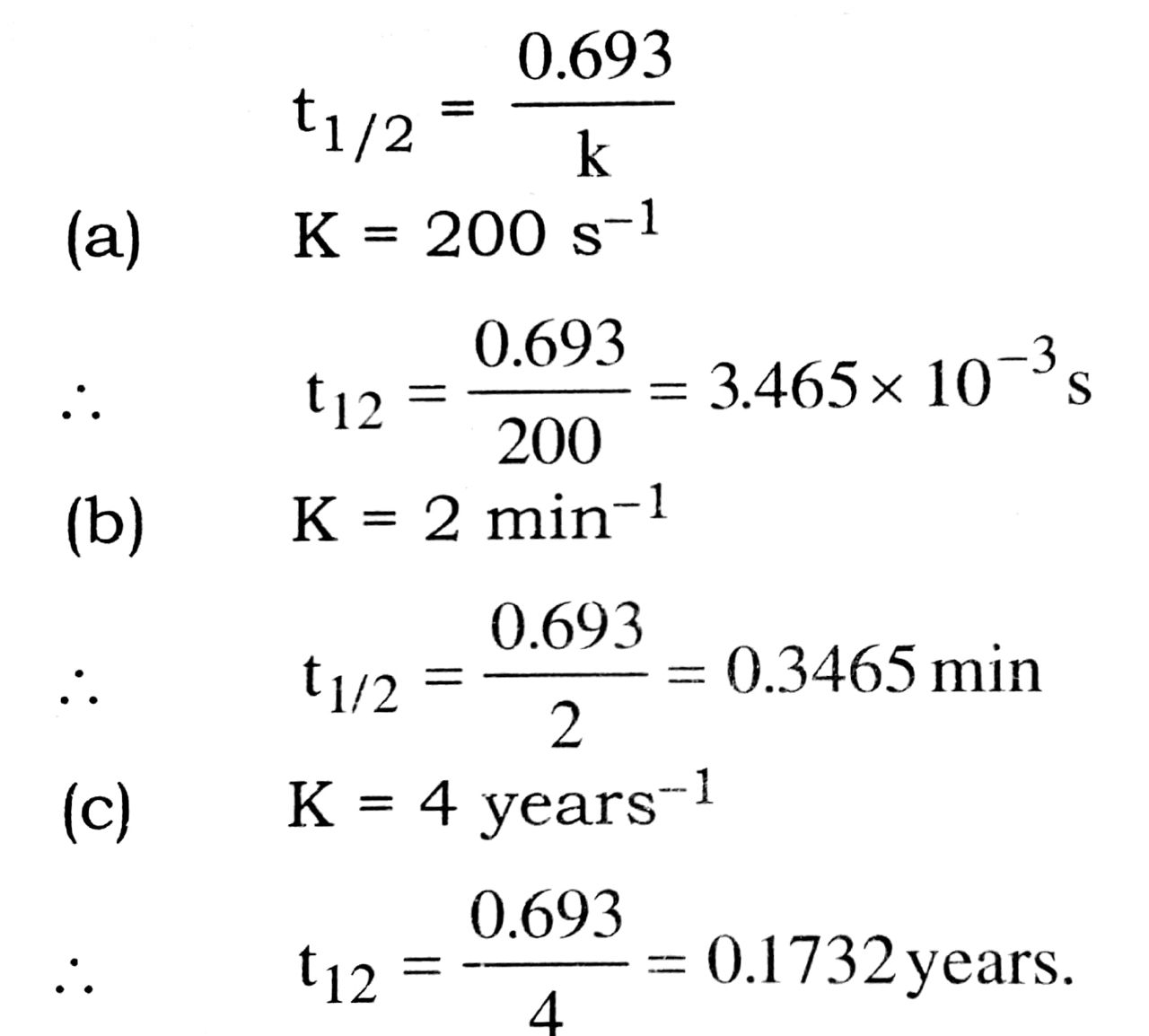 Q. 13. The rate constant for a first order reaction is 60 s-1. How much time will it take to reduce the initial concentration of the reactant to its 1/16th value ?

Rate constant  of first order reaction is given by

where 15/16th the reaction is over then 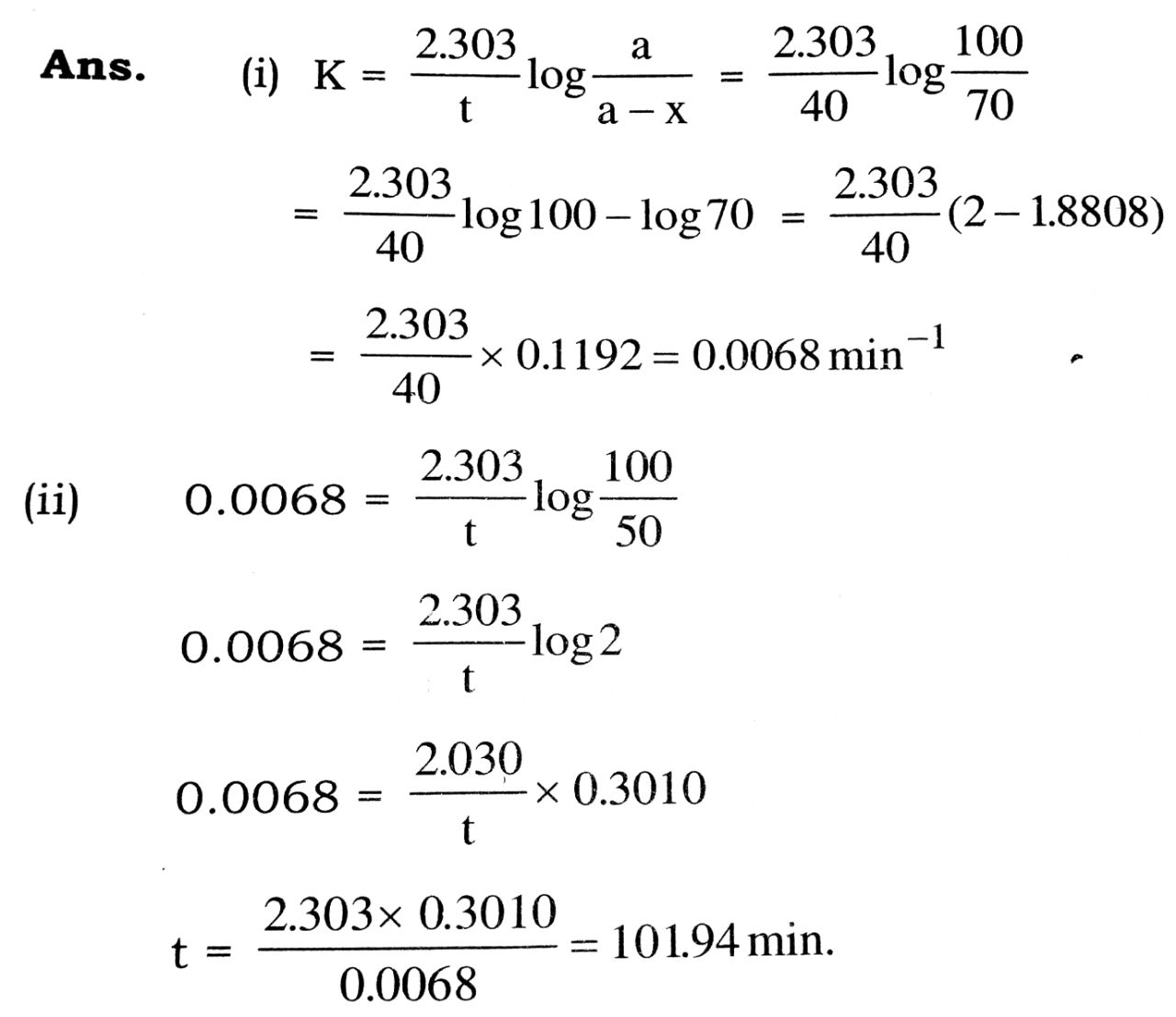