Q. 1. What is the difference between physisorption and chemisorption ?

Ans⇒ Physisorption : When a gas is held (adsorbed) on the surface of a solid by vander Wala’s forces without resulting into the formation of any chemical bond between the odsorbate and the adsorbent, it is called physical adsorption or vander Waal’s adsorption or Physisorption. It is characterised by (i) low heats of adsorption (20-40KJ mol-1) (ii) the process is reversible, (iii) no activation energy is required, (iv) proceeds at low temperature and decreases with increase in temperature, (v) not specific in nature (vi) forms multimolecular layers.

Chemisorption : on the other hand, is a phenomenon where the gas is held on to the surface of a solid by forces similar to those of a chemical bond. This adsorption results in the formation of what is called surface compound. It is characterised by

(i) High heats of adsorption (40 – 400 KJ mol-1)
(ii) the process is irreversible (iii) it requies activation energy; (iv) This type of adsorption first increases with increase in temperature (v) it is specific in nature (vi) It forms unimolecular layer.

Q. 3. Give applications of colloids in detail.

Ans⇒ Colloids including emulsions have great number of uses in day to day life, such as

(iv) In preparing nano-material : Nano material are used as catalysts and are prepared by using reverse micelles.

(vii) In medicine : Medicines and pharamaceutical preparation in the form of emulsions are more easily assimilated.

Hydrophobic sols easily coagulated as in this dispersion medium has no apparent affinity or interaction with the dispersed phase.

Q. 5. What are emulsions ? What are their different types ? Give example of each type. Write two applications of emulsification.

Ans⇒ Emulsion : A colloidal dispersion of two immiscible liquids is called an emulsion. The emulsion droplets are somewhat larger than the particles of sol. but smaller than coarse suspension.

There are two types of emulsions :

(i) Soap emulsifies grease and takes it away in water along with the dirt.

(ii) Digestion of fats in the intestines is aided by emulsification.

Example : (i) Centrifugation separation cream (fat) from milk which is an emulsion.

(ii) When water is the dispersion medium, the presence of a dehydrating agent can result in the demulsification.

Q. 7. Action of soap is due to emulsification and micelle formation. Comment.

Ans⇒ Yes, action of soap is due to emulsification and micelle formation. Soaps are sodium salts of higher fatty acids such as sodium stearate. C17H35COO-Na+, which ionises as 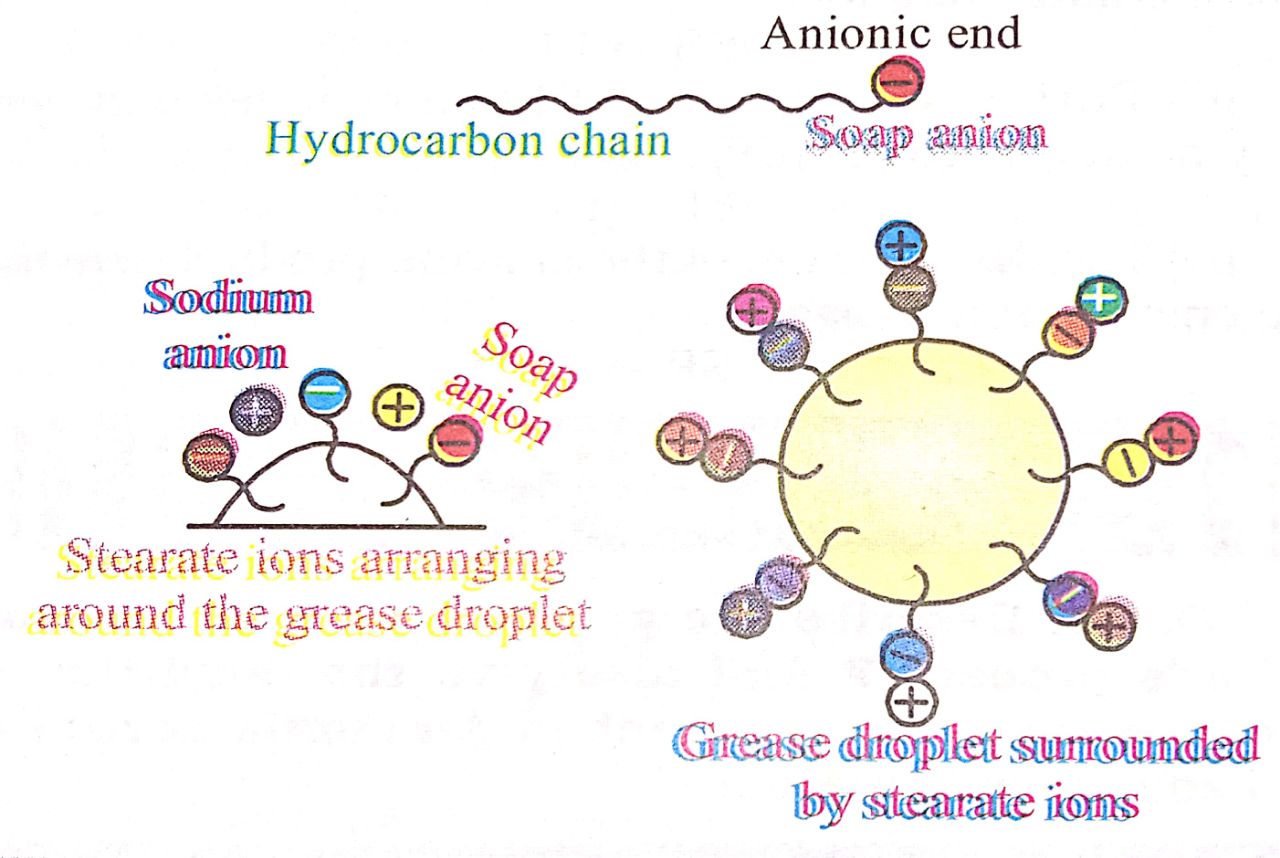 When soap is used in water, the anions (C17H35 COO–) from micelle and due emulsification encapasulate oil or grease inside. (See fig.) These micelles are removed by rinsing with water; while free dirt (from oil or grease) either settle down or are washed away by water. Thus the main function of a soap is to entrap oil or grease with the micelles through emulsification, therefy freeing dirt from grease and oil.

Q. 8. Define enzymes. How do enzymes differ from ordinary chemical catalysts ? Comment on the specificity of enzyme action. What is the most important reason for their specificity ? Explain the mechanism of enzyme catalysis.

Ans⇒ Enzymes are biocatalysty produced by the living cells which catalyse many biochemical reactions in animals and plant bodies. Enzymes are protein substances.

Enzymes differ from ordinary chemical catalysts in the following ways :

(i) Enzyme catalyst the reaction by about million times faster than the normal chemical catalysts.

(ii) Enzymmes are very specific in their action. Each biochemical reaction requires a particular enzyme for it.

(iii) Enzymes work under milk conditions of temperature and at specific pH.

Specficity of enzyme action : Enzymes are extremely specific; each reaction is generally catalyzed by a particular enzyme. For example, hydrolysis of urea is catalysed by only urease and none of the several thousand other enzymes present in the cell catalyse this reaction.

The specificity of enzymes results from the fact that each enzyme has a specific active site on its surface. When the reactant molecules, called the substrates of the reaction bind at the active site, a chemical change is initiated. In most of the cases, substrates bind to the active site through intermolecular forces like. H-bonds, dipole forces and other weak attraction.