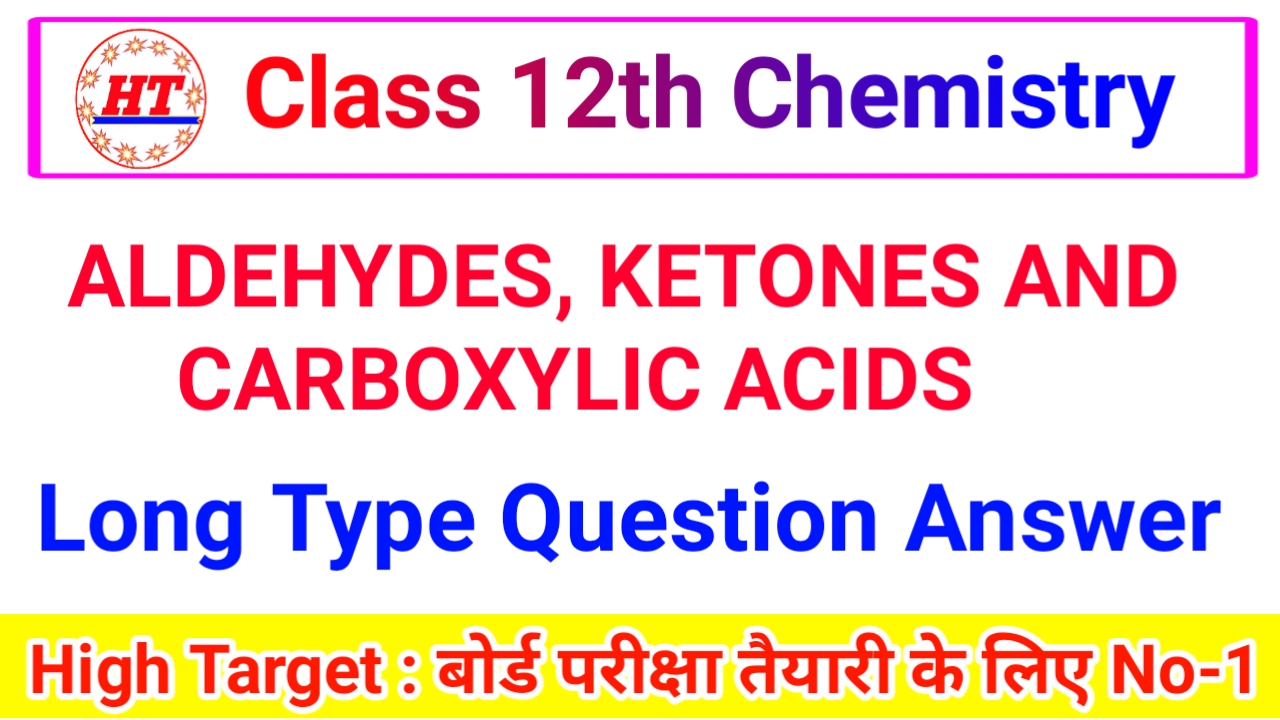 Q. 1. Explain the following and give an example:

(ii) Acetal : It is dialkoxy compound formed by the reaction of aldehyde and two moles of alcohols, e.g. 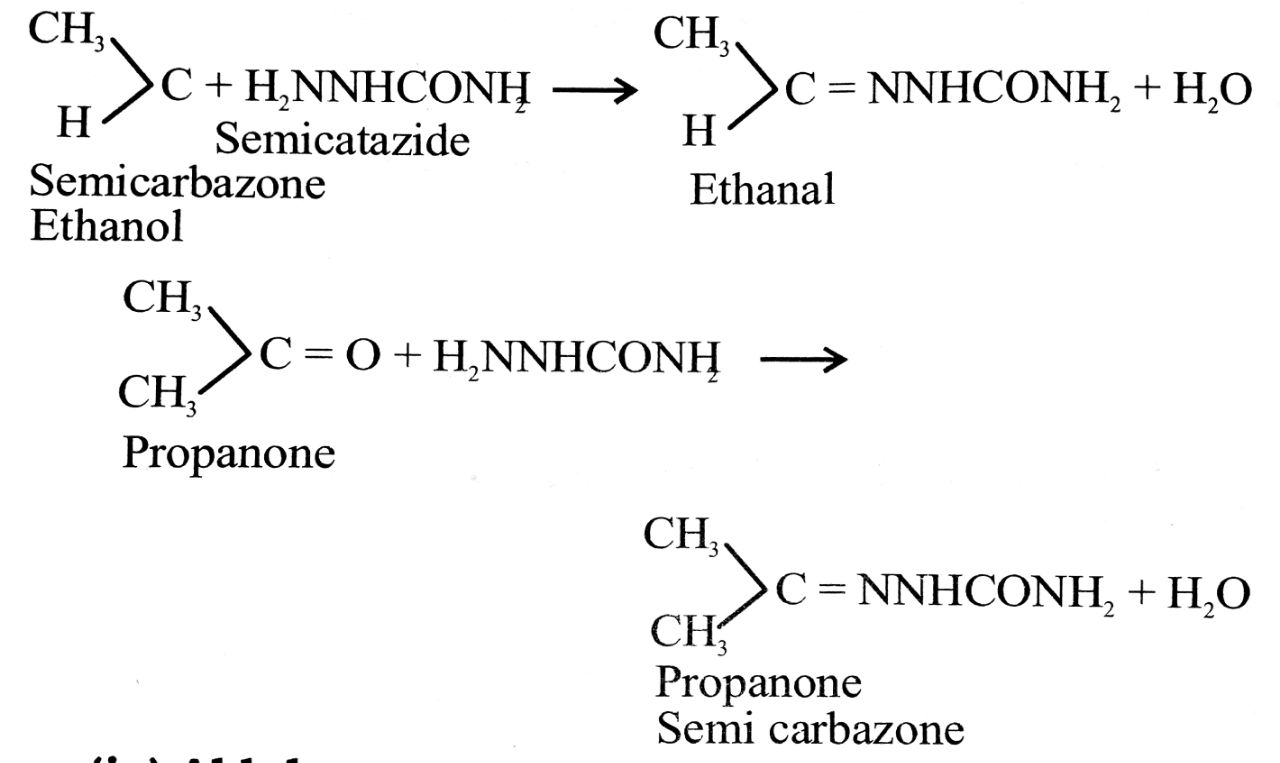 (iv) Aldol : The compounds having alcoholic group and aldehyde or ketone group are called aldols, e.g.,

(v) Hemi-acetal : It is formed by the reaction of aldehyde with one mole of alcohol. It contains both alcohol and alkoxy group e.g.,

(vi) Oxime : When aldehydes and ketones react with NH2OH (hydroxylamine) oximes are formed. 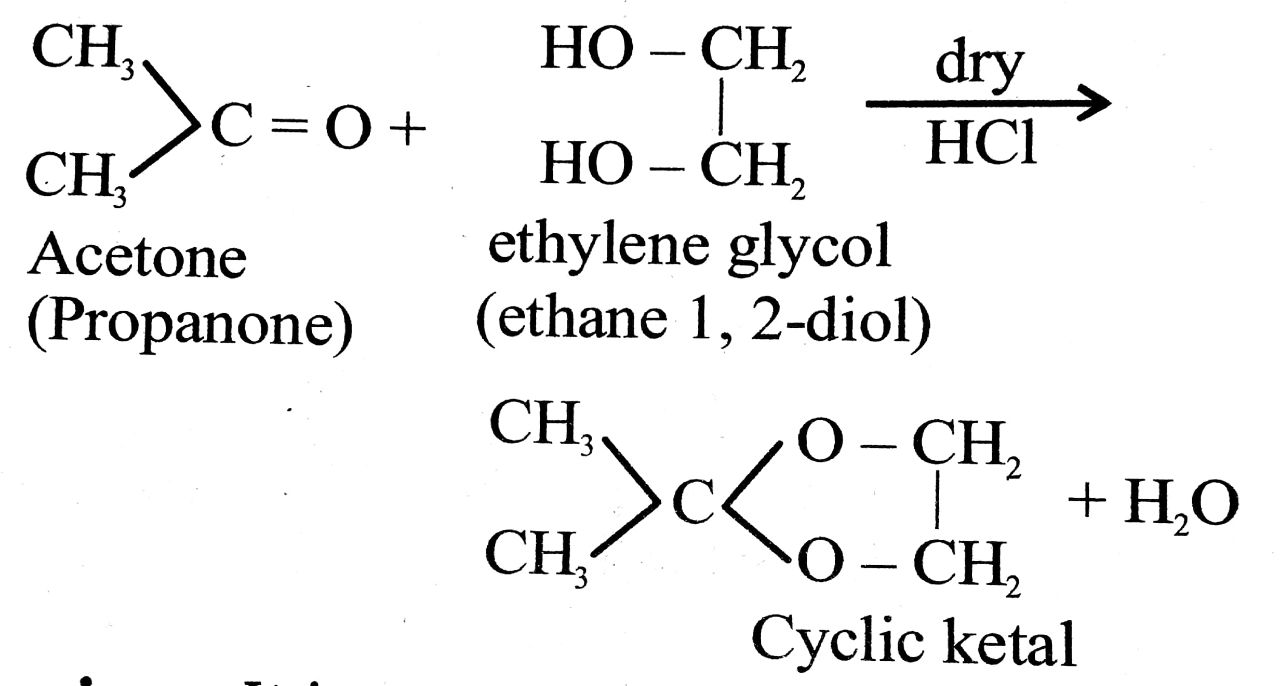 It is short name 2, 4-Dinitrophenyl hydrazine. 2, 4 DNP derivatives are yellow, orange or red solids, useful for characterisation of aldehydes and ketones.

(x) Schiff’s base : They are the class of compounds having general formula C6H5-N=CR2, where ‘R’ is alkyl or aryl group or hydrogen atoms. It is formed by reaction of primary aromatic amine with aldehydes or ketones. It turns aldehyde pink. 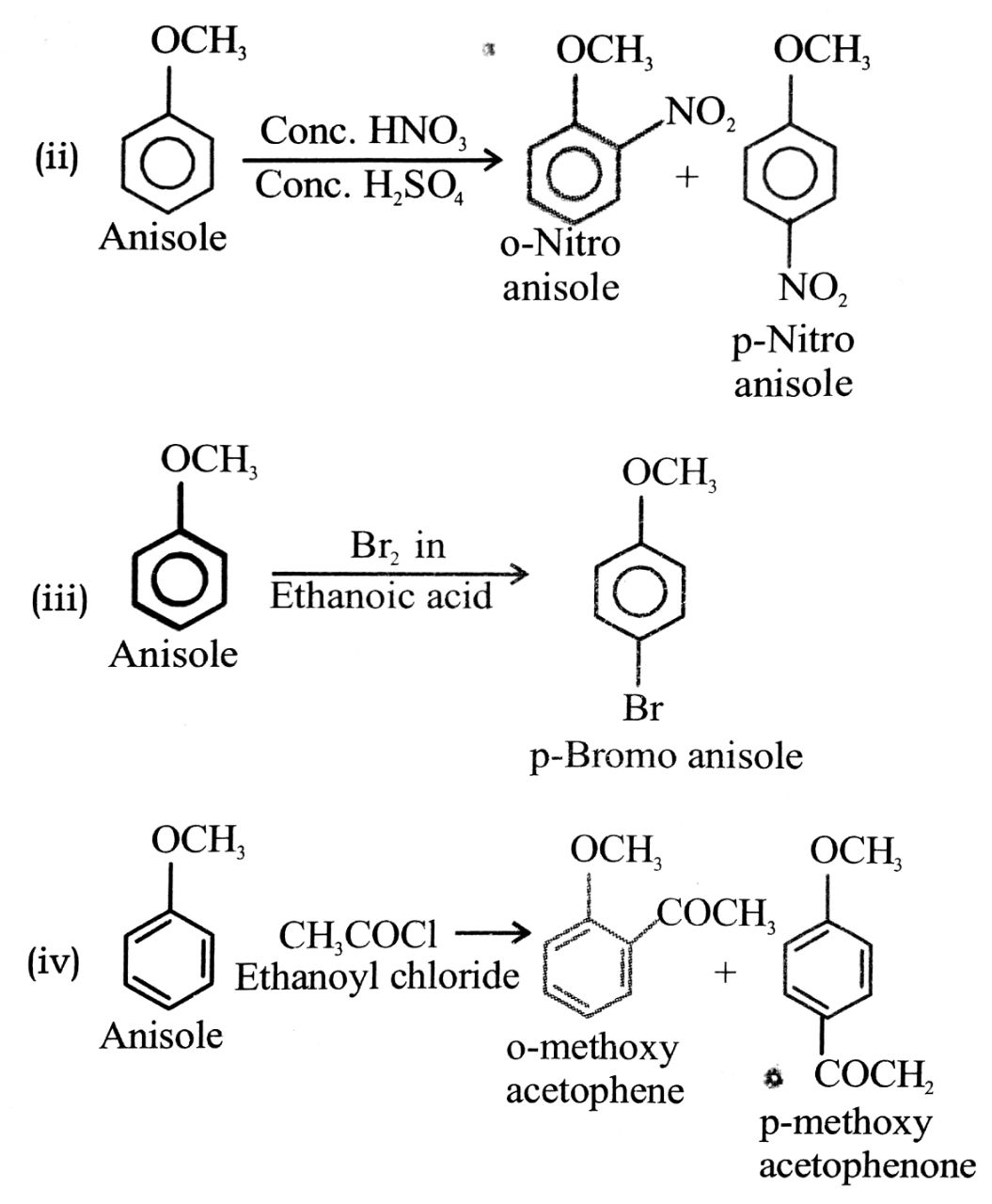 Q. 3. Explain phenol is more acidic than aliphatic alcohol, Why?

Ans⇒ The strength of acid depends on the stability of its conjugate base. When phenol releases Ht and forms phenoxide ion (C6H5O–) which is a conjugate base of phenol which under resonance and stablises it and hence phenol is more acidic.

But in case of Aliphatic alcohol (ROH) it also forms alkoxide ion (RO–) after loosing H+ but it is not stablised due to inability to form resonance. 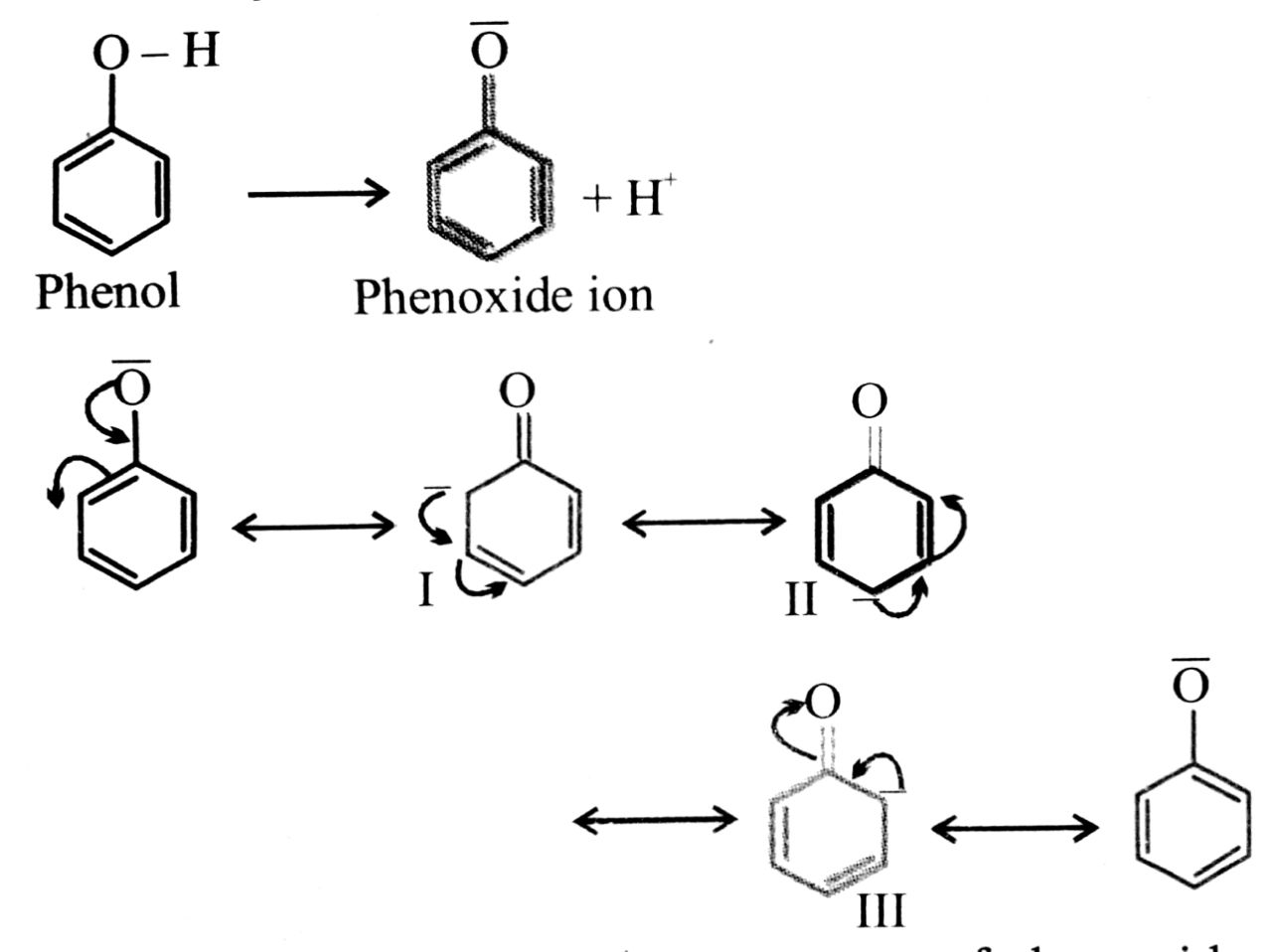 I, II and III is the resonating structure of phenoxide ion showing resonance.

1° Alcohol (Primary Alcohol) becomes turbid at last by the formatiion of chloride with lucas reagent.

The amount of turbidity formation depends on the stability of carbocation which is as follows :

Q. 5. How will you obtain aldehydes from primary alcohols ?

(i) By the oxidation of alcohols : An aldehyde is prepared when a primary alcohol is oxidised by acidified potassium dichromate under controlled conditions.

(ii) By catalytic dehydrogeneration of alcohol : By passing vapours of a primary alcohol over hot reduced copper at 573 K, we get an aldehyde.

Q. 6. How will you prepare ketones from alcohols ?

Ans⇒ Preparation of ketones from alcohols : Ketones can be prepared from secondary alcohols either ‘ by oxidation or by catalytix dehydrogeneration.

(i) Oxidation of secondary alcohol:

Q. 7. Discuss the preparation of aldehydes and ketones from alkenes.

acid or hydrogen on palladium, aldehydes and ketones are formed.

(ii) If out of the two doubly-bonded carbon atoms in alkene only one carbon contains a hydrogen atom, a mixture of aldehyde and ketone will be obtained. 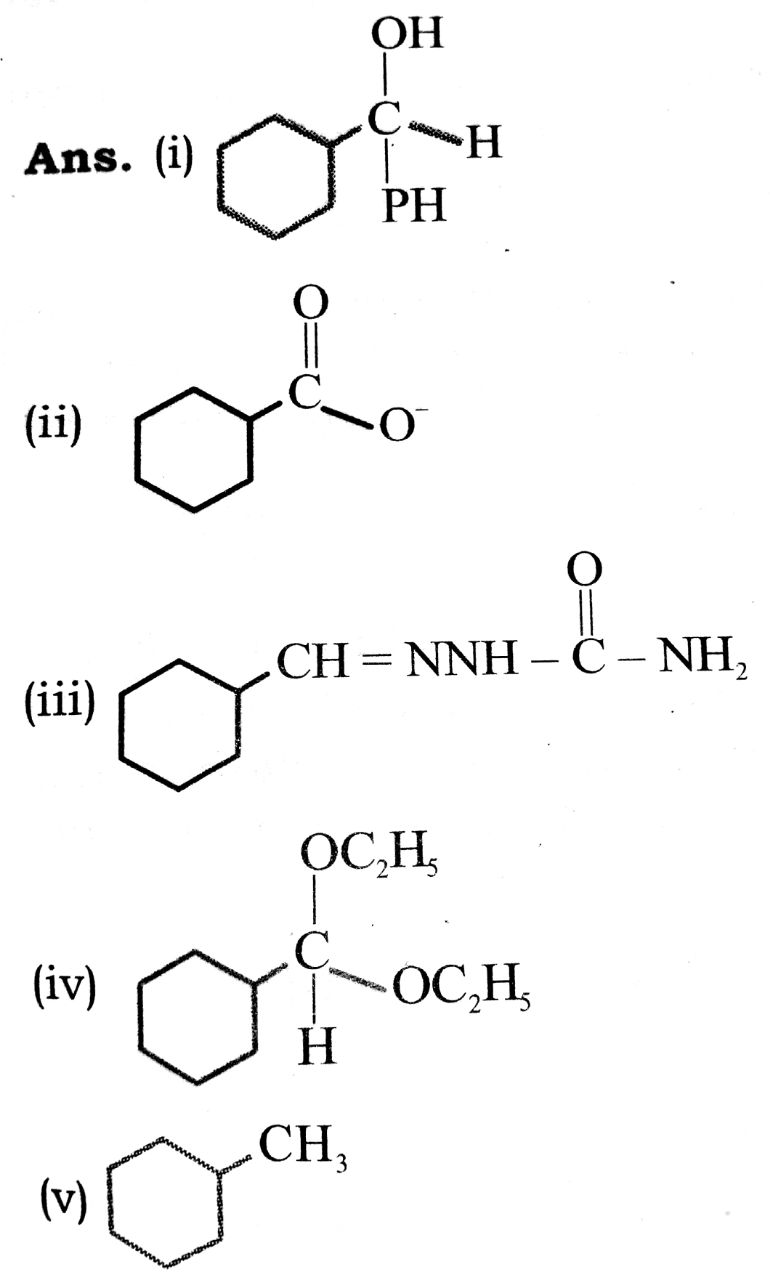 Ans⇒ (i) Acetylation : Acetylation is the replacement of H atom of alcohols, amines and other such compounds with acetyl group, e.g.,

(ii) Cannizzaro’s reaction : In this reaction two molecules of aldehydes (without the a-hydrogen atom) react in presence of concentrated alkali by mutual oxidation-reaction forming one molecule of each of the corresponding alcohol and acid. Thus

Methanol when heated with alkali gives methanol and methanoic acid.

(i) Aldehydes are more reactive than Ketones towards nucleophilic addition reaction.

3-oxopentanoic acid
(b) (i) The reactivity of the carbonyl group to wards the nucleophilic addition reaction depends upon the magnitude of positive charge on the carbonyl carbon atom. Introduction of alkyl group (+ I effect) decreases the reactivity ketone has two alkyl groups while the aldehydes have only one. So aldehydes are more reactive towards nucleophilic addition reactions.

Q. 11. Why is benzoic acid a stronger acid than phenol ?

Ans⇒ Benzoic acid is a stronger acid than phenol because the benzoate ion is stabilised by two equivalent reasonance structure in which the negative charge is present at the more electronegative oxygen atom.

The conjugate base of phenol, a phenoxide ion, has non-equivalent resonance structure in which the negative charge is at the less electronegative carbon atom. Thus, the benzoate ion is more stable than phenoxide ion. Hence benzoic acid is a stronger acid than phenol.

(i) Aldehyde is treated with methyl magnesium bromide and then hydrolysed.
(ii) Acetyl chloride is heated with hydrogen in presence of boiling Xylene Pd-supported by BaSO4
(iii) Propanone is treated with I2 and NaOH.
(d) Identify the products A and B in the following reactions.