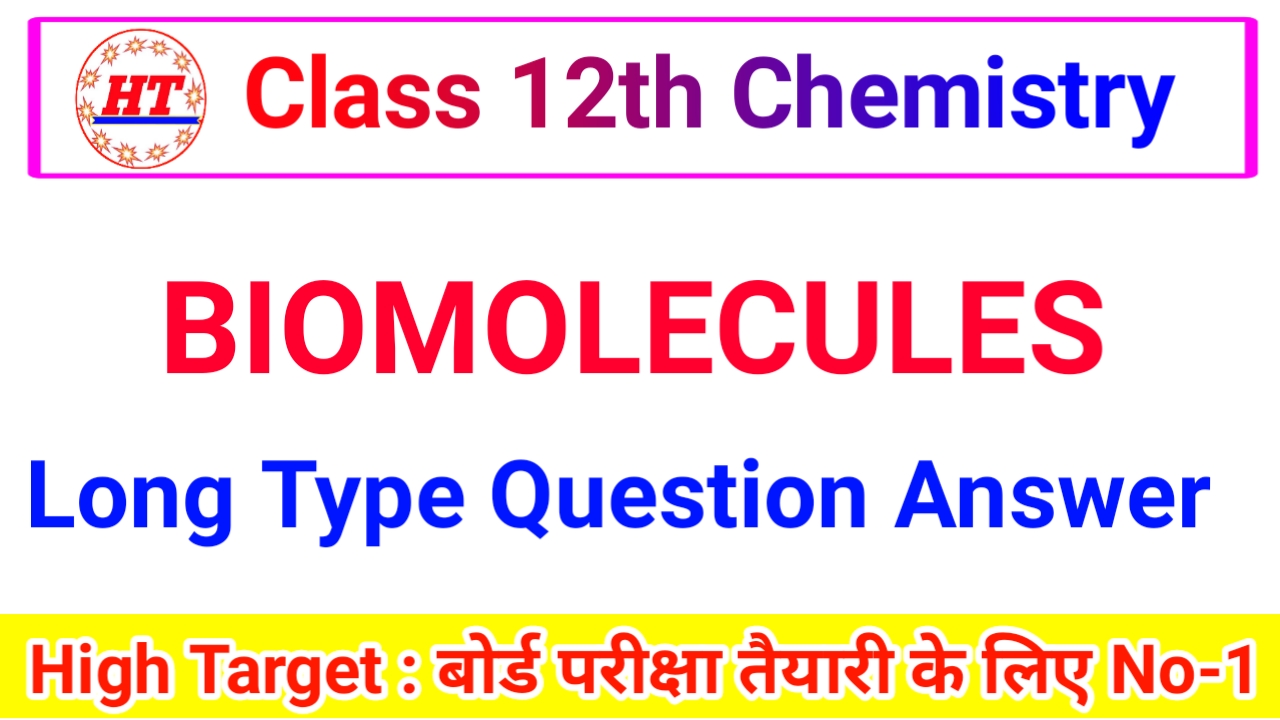 1. What is glycogen ? How is it different from starch ?

Ans⇒ Glycogen is a polysaccharide. It is a polymer of D-glucose. It stores food in animals and human beings.

Glycogen and starch differ in the type of glycoside bond that joins the D (+) glucose monomers and the amount of chain branching.

Q. 2. What are essential and non-essential amino acid ? Give two examples of each type.

Q. 3. Define the following as related to proteins :

is formed by the combination of carboxyl

group of one amino acid and the amino group of another acid. Various amino acid units in a peptide molecule or protein molecule are held by peptide bonds.

Q. 4. How are glucose molecules joined together to make starch, glycogen and cellulose ?

Ans⇒ (i) Starch : Starch is a polymer of α -glucose and consists of two components, namely, amylose and amylopectin. Amylose is a linear polymer of a -D glucose. It contains about 200 glucose units which are linked to one another through a -linkage involving C, of one glucose unit with C, of the other. Amylopectin, on the other hand, is highly branched polymer

(ii) Glycogen : It is a polymer of about thousand glucose units arranged in the form of highly branched chain.
(iii) Cellulose : Cellulose is a linear polymer of B-D glucose in which C1 of on glucose unit is connected to C4 of the other as shown below

Q. 6. Write the linear and ring forms of sugar. 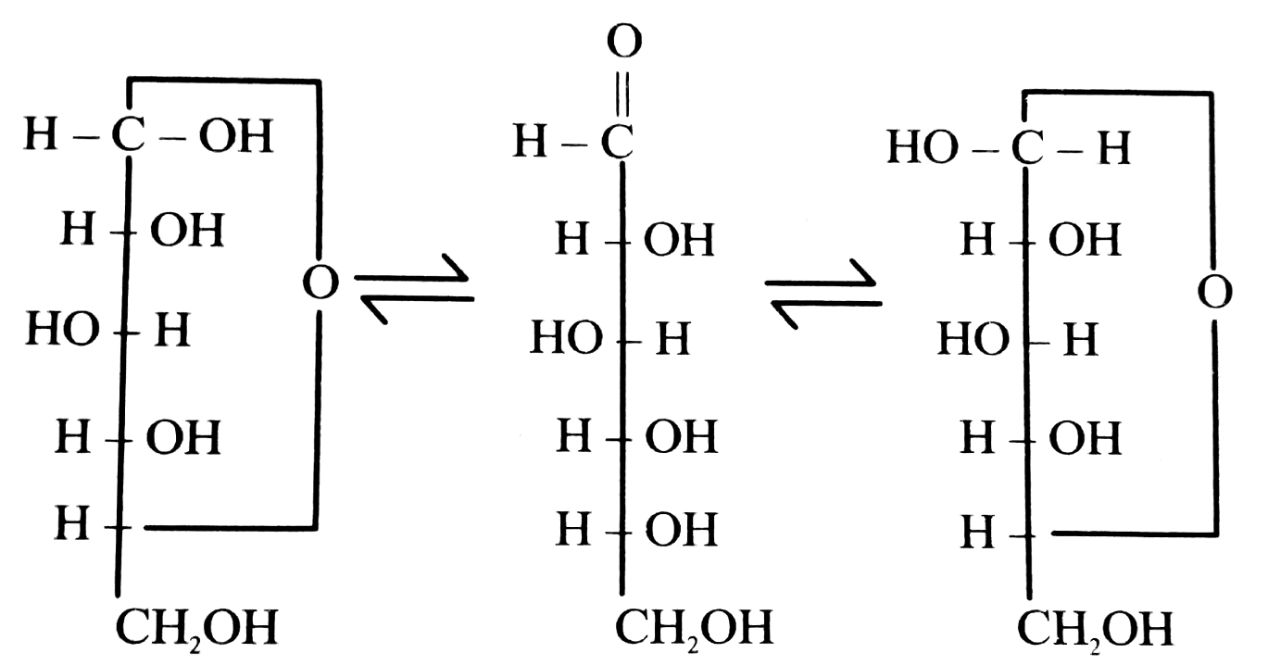 Q. 7. How are glucose molecules joined together to make starch, glycogen and cellulose ?

(ii) Glycogen : It is a polymer of about thousand glucose units arranged in the form of highly branched chain.

(iii) Cellulose : Cellulose is a linear polymer of β – D-glucose in which C1 of on glucose unit is connected to C4 of the other as shown below :

Q. 8. What happens when D-glucose is treated with following reagents?

(ii) Glucose reacts with hydroxylamine to give monoxime.

Ans. (i) Preservatives : These are the chemical substances which are added to the food materials to prevent their spoilage and to retain their nutritive value for long periods. These preservatives prevent the rancidicy of food and inhibit and growth or kill the micro organisms.

(ii) Artificial sweeteners : These are the chemical compounds which give sweetening effect to the food and enhance its odour and flavour.

(iii) Antioxidants : An antioxidant may be defined as the substance which when added to the fats and fat containing foods prevents their oxidation and thus prolong their life. The commonly used antioxidants are Butylated hydroxy anisole (BHA), Butylated hydroxy toluene (BHT), Propylgallate (PG), Tertiary butyl hydroquinone (TBHQ).

(iv) Edible colours : These are the chemical substances which are used for imparting colour to the food and increase the eye appeal and compliment a definite flavour. The main condition for using a colour in food is that it should be hasless to the human health. It should be stable towards the action of acids, alkalies, high temperature, day light and the long storage. The use of the following dyes have been permitted to impart characteristics colours.

According to the Public Health Department, the following colouring matters are not allowed in food products.

Q.10. What are the building blocks (repeat units) of proteins ? Describe the structure of protein.

Ans⇒ A protein is a high polymer on hydrolysis it ields amino acids. Thus, amino acids are the monomeric inits of all proteins. In a molecule of protein, the amino acid residues are joined by peptide bonds. Therefore, proteins are also called condensation products of amino acids or polyamide.

(b) Secondary structure : In many proteins, polypeptide chain gets coiled up to form α-helix which is right handed and dids d called a-helix. In the helix each NH group is hydrogen bonded to the carbonyl oxygen of the third amino acids residue from it. It is this hydrogen bonding between different parts of the same chain which holds the helix together. Some proteins have β-pleated structure. This is also called β-sheet structure. In the sheet arrangement two peptide chains lie side by side and are joined via hydrogen bonds. 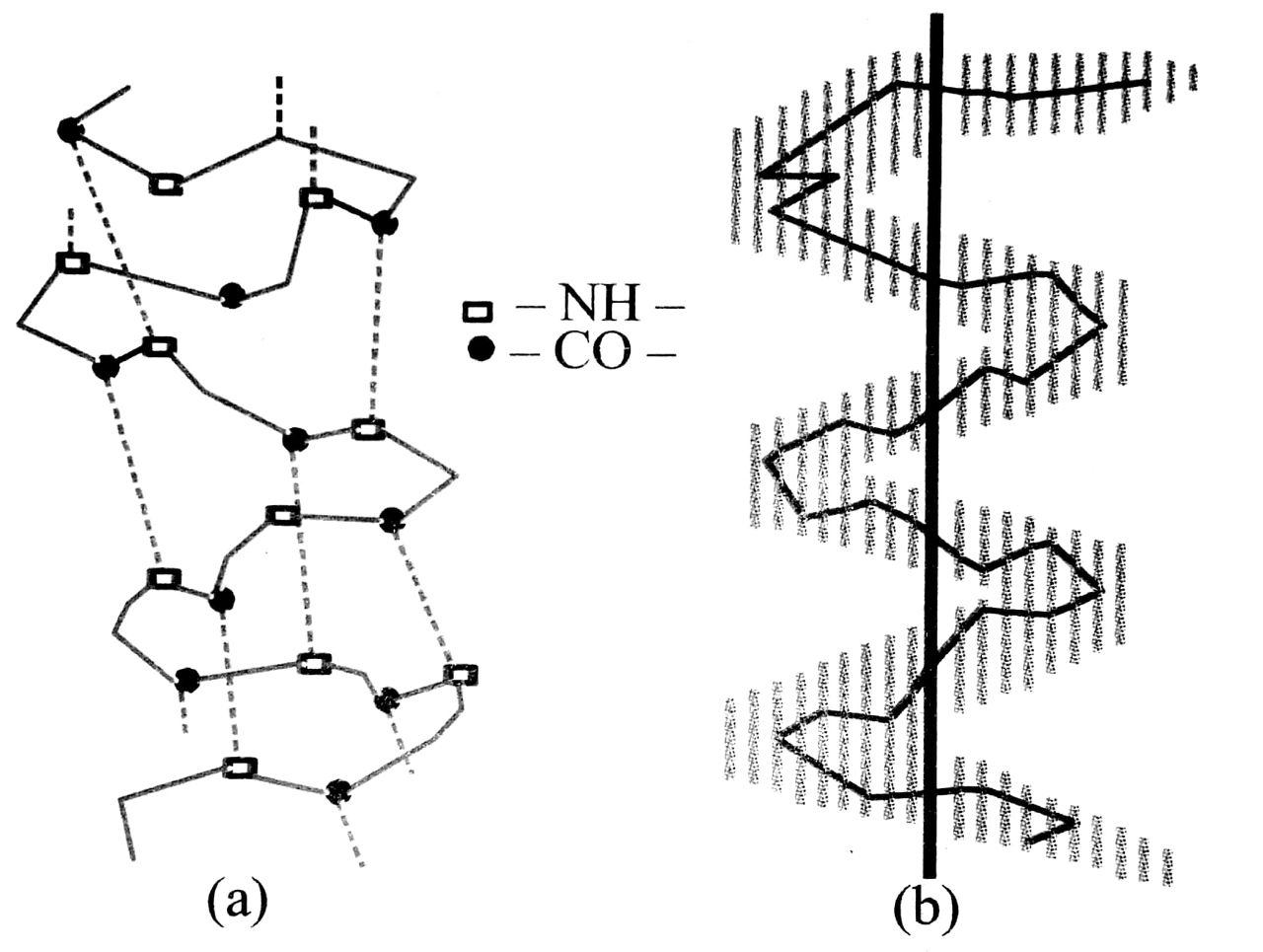 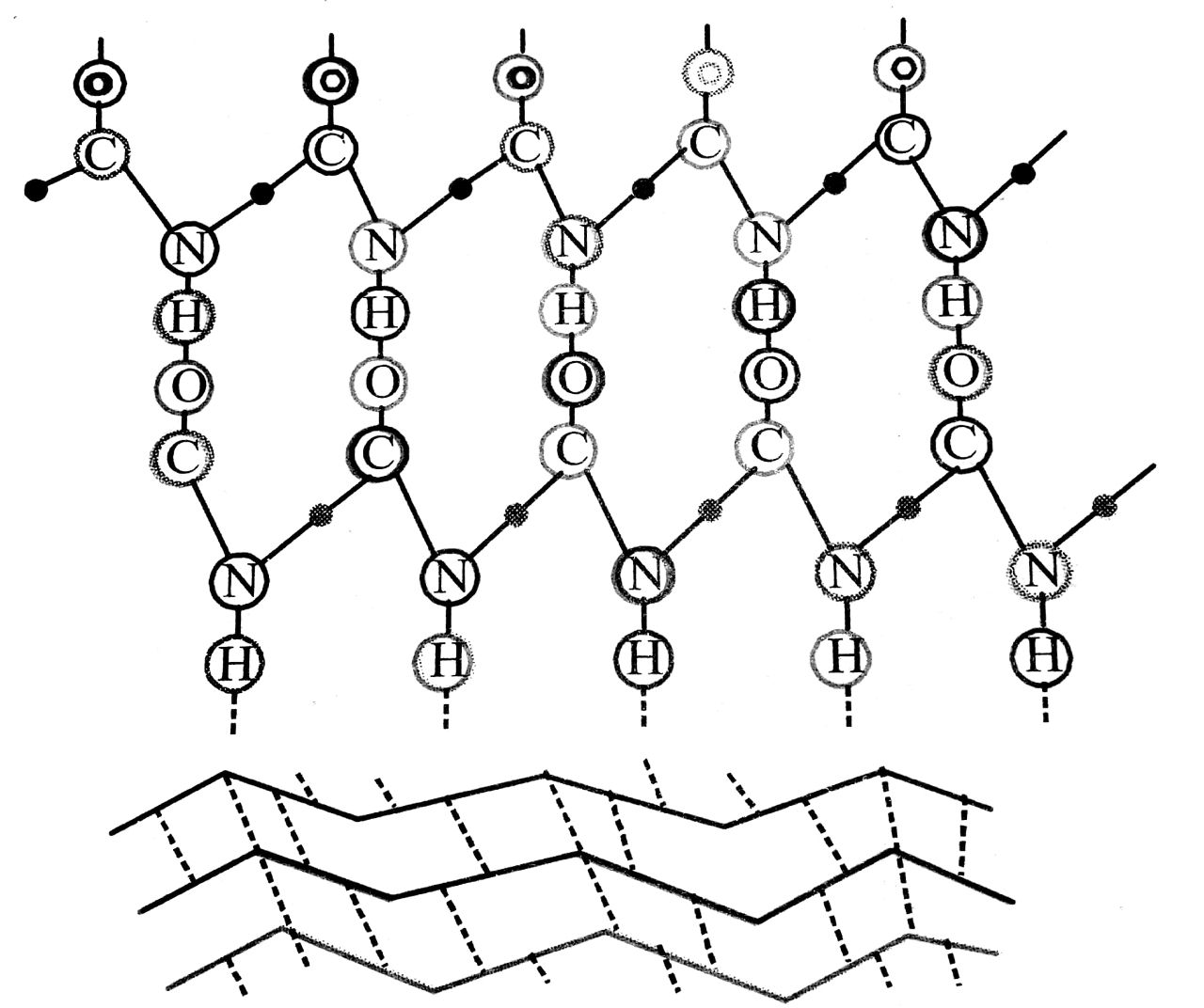 β-pleated sheet structure of a protein

(c) Tertiary structure : The peptide chains with its secondary may be further folded and twisted about it self forming many structural coils of diverse sizes or shapes. They, brings some distant amino acids residues close to each other. Tertiary structures are held and stabilized by :

(d) Quaternary structure : This defines the degree of polymerization of protein unit. Both fibrous and globular proteins may contain one or more polypeptide chains. In case of fibrous protein these are called monomeric while in case of globular these are referred to as oligomeric. The individual peptide chains of an oligomeric protein are called promoters. These promoters may be same or different but are held together by weak binding force

Q. 11. What are the common types of secondary structure of proteins ?

chain due to hydrogen bonding between –

α -Helix is one of the most common ways in which a polypeptide chain forms all possible hydrogen bonds by twisting into a right handed screw (helix) with the – NH group of each amino acid residue hydrogen bonded to the > C = 0 of an adjacent turn of the helix as shown in fig. below : 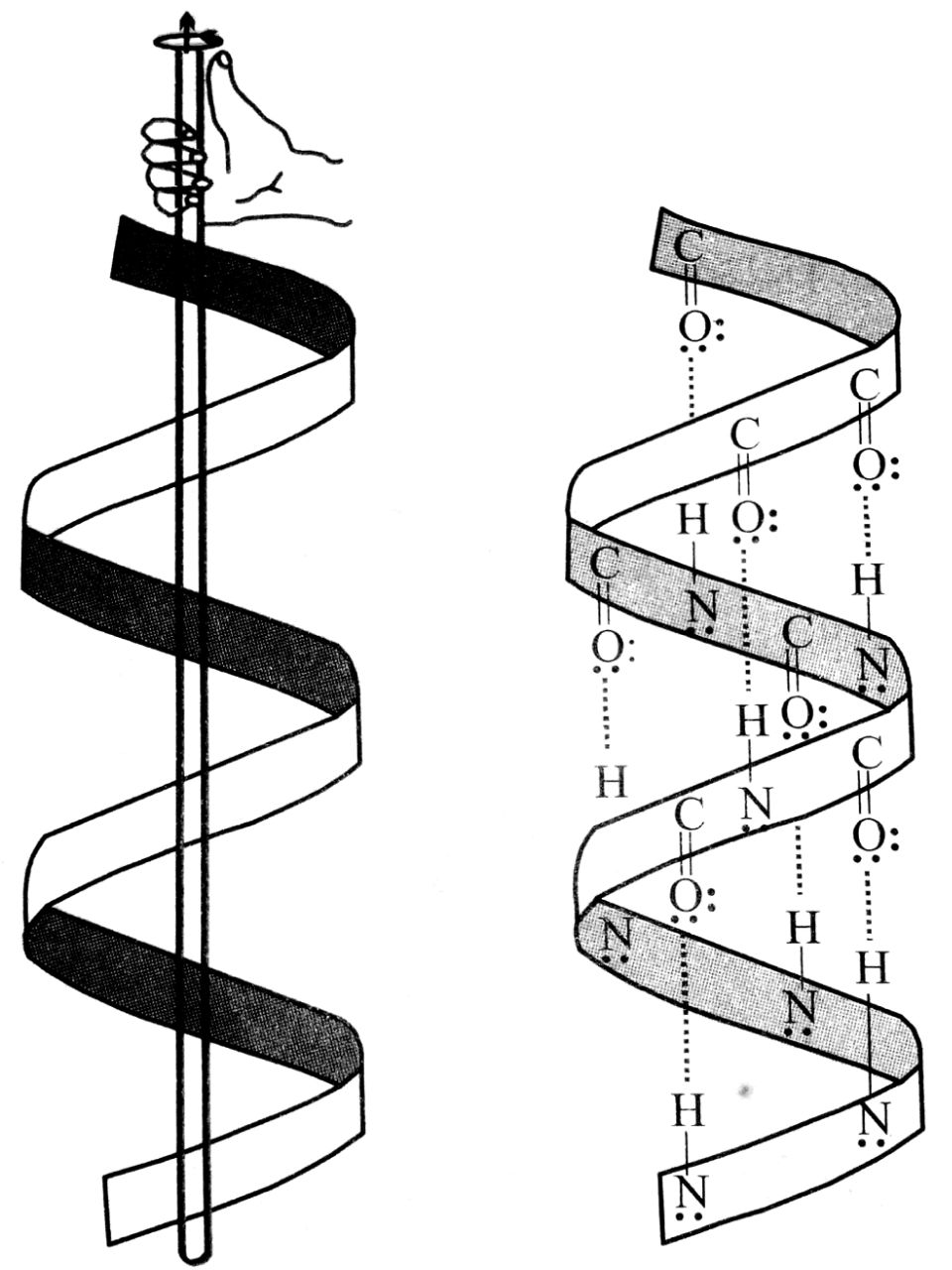 In β -structure all peptide chains are stretched out to nearly maximum extension and then laid side by side which are held together by intermolecular hydrogen bonds. The structure resembles the pleated folds of drapery and therefore is known as β -pleated sheet.

(b) What are Vitamins ? How are they classified ?

Ans. (a) Enzymes : Enzymes are biological catalysts. Almost all enzymes are globular proteins. Enzymes are very specific for a particular reaction and for a paritular substrate. They are generally named after the compound or class of compounds upon which they work. For example, the enzyme that catalyses hydrolysis of maltose into glucose is named as maltose.

Sometimes enzymes are also named after the reaction, where they are used. For example, the enzymes which catalyse the oxidation of one substrate with simultaneous reduction of another substrate are named as oxidoreductase enzymes. The ending of th name of an enzyme is -ase.
Enzymes are needed only in small quantities for the progress of a reaction. Similar to the action of chemical catalysts, enzymes are said to reduce the magnitude of activation energy. For example, activation energy for acid hydrolysis of sucrose is 6.22 kJ mol-1, while the activation energy is only 2.15 kJ mol-1 when hydrolysed by the enzyme, sucrase.

(b) Vitamins : Vitamins are the organic compounds required in diet in small amounts to perform specific biological functions for normal maintenance of optimum growth and health of the organism. Vitamins are designated by alphabets A, B, C, D etc. Some of them are further named as sub-ground e.g. B1, B2, B6, B12, etc. Excess of vitamins is also harmful and vitamin pills should not be taken without the advice of doctor

Vitamins are classified into two groups depending upon their solubility in water or fat.

(i) Fat soluble vitamins : Vitamins which are soluble in fat and oils but insoluble in water are kept in this group. These are vitamins A, D, E and K. They are stored in liver and adipose (fat storing) tissues.

Ans⇒ Carbohydrates are classified into three major categories depending upon their behaviour towards hydrolysis :

1. Monosacchrides : These are simple carbohydrates which cannot be hydrolysed to still simpler carbohydrates. About 20 monosaccharides are known to occur in nature. Glucose, Fructose and Glactose are common example.

2. Oligosacchrides : These are the carbohydrates which on hydrolysis give two to ten units OI monosacchrides. Accordingly, they may be further divided into di, tri or tetra-sacchrides depending upon the actual number of monosacchride units formed by the hydrolysis of a particular oligo saccharide.

3. Polysacchrides : These are the carbohydrates which are polymeric molecule and can be hydrolysed to give a large number of monosacchride unit. The commonly occuring polysaccharide have the general formula (C6H10O5)n. The common example are starch, glycogen and cellulose.