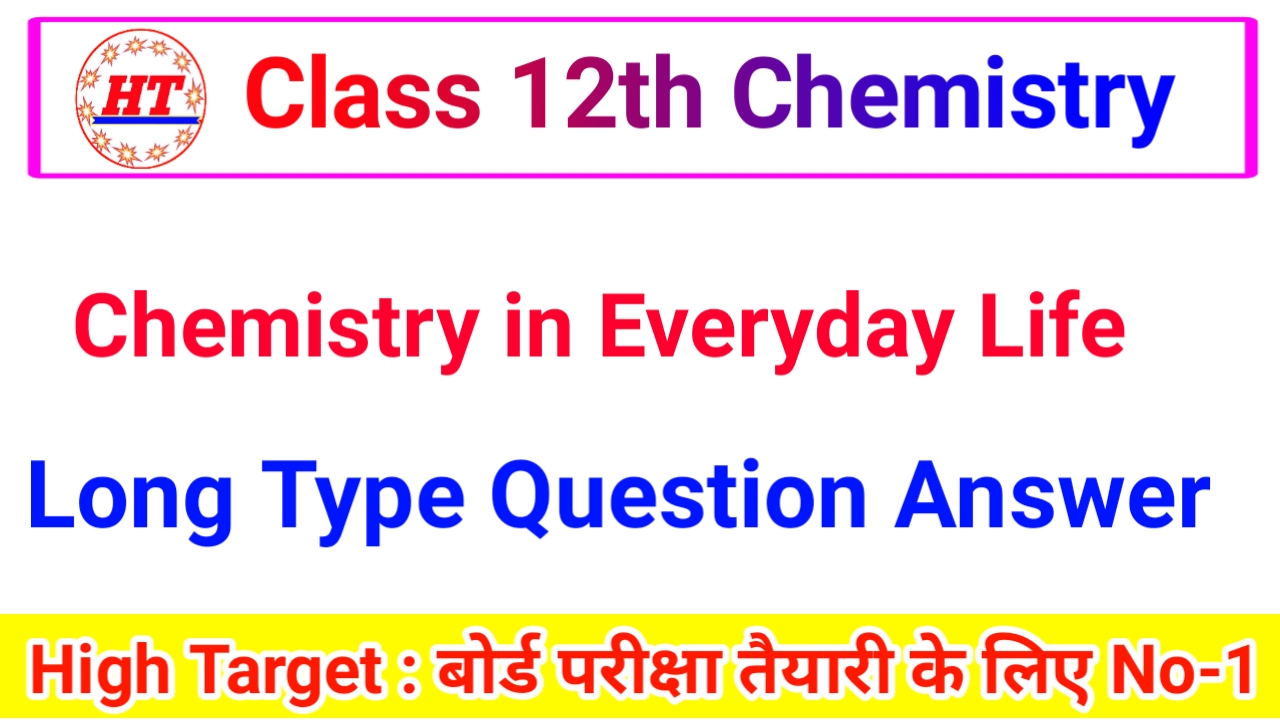 Q. 1. With the help of example, explain how do following type of drugs functions ?

Ans. (i) Analgesics : These are the chemical substances which are used for relieving pains in the body. Analgesics are of two types.

(b) Narcotic analgesics such as morphine and many of its homologuse, when administered in medicinal doses, relieve pain and produce sleep.

(ii) Antacids : They are the chemical substances which can reduce or neutralise the acidity. The function of the antacids is to neutralise the acidithy and raise the pH level. They may also act as buffers i.e., they may now allow the pH level to fall when extra acids are released. The commonly used antacids contain magnesium salts (magnesium trisilicate) and aluminium salts (aluminium hydroxide and aluminium silicate).

(iii) Antifertility drugs : The anti-fertility drugs are mostly hormonal contraceptives. The mechanism of action of a combined oral pill is to prevent the pituitary secretion of gonadotropin hormone which is necessary for the ovulation to occur.

Progestogen-only preparations render the cervical mucus thick and scanty and thereby inhibit sperm penetration. They also inhibit tubal motility and delay the transport which is necessary for the ovulation to occur.

Q.2. Give the struture of one broad sdpectrum by an antibiotic. Mention two diseases for which this abitibiotic can be used.

Ans. The full range of micro-organisms attacked by an antibiotic is called its spectrum. Tetracycline, chloramphenicol are broad spectrum antibitics.

It can be used for curing :

Q. 3. Define the following and give one example of each:

Ans. (i) Antihistamines : It is the group of drugs which counteract the effect of histamine in the body. These are also called anti-allergic drugs. Allergic reactions are caused due to liberation histamine in the body that is why these drugs are called antihistamines. These are used to treat allergy e.g., skin rashes, conjuctivitis and rhinitis (inflammation of nasal mucosa). Commonly drugs of this group are : diphenyl hydramine, chloropheniramine, promethazine etc. Some other commonly used antihistamines are : trimeton and benadry etc.

(ii) Disinfectants : Disinfectants kill micro organisms, but are not safe for living tissues. These are applied for inanimate objects such as floors, drainage system, instruments etc. Example : one percent solution of phenol, chlorine in concentration of 0.2 to 0.4 parts per million etc.

(iii) Antipyretics : The chemical substances which are used to lower the temperature of the body in high fever are called antipyretics. Example : Aspirin, paracetamol and plenacetin.

Ans. Narcotics : Narcotics are compounds which possess general depressant action on the central nervous system. They can be classified into sedatives, hypnotics or tranquilizers and general anaesthetics :

(i) Sedatives : They cause a milder form of depression. The most widely used sedatives are the bromides and the bromo-compounds. KBr is the most commonly used bromide. Brono valetone and velero bromine are used as sedatives.

(ii) Tranquilizers : These are the compounds that help in reducing anxiety by acting on nervous system. These induce sleep and can be habit forming. Examples as luminal, equanil, seconal etc.

(iii) Anaesthetics : These are the compounds used to prodrce unconsciousness and muscular relaxation, sufficient to allow the performance of surgical operations. Examples are ethylene, Divinyl ether and cycloprone.

Sometimes for small operations and tooth extracted the limited area made senseless either by injecting or by local application of the drugs which are called local anaesthetics. Example are cocaine, novocaine and xylocaine.

Ans. All the soaps and detergents contain two characteristic groups, i.e., a water soluble (hydrophilic) group and oil-solubie (Lyophilic or lipophilic group). As a result one end of the molecule of a soap or detergent tends to go into oil phase and the other end tends to go into water phase with the net result that the material (soap or detergent) concentrates at the surface of the solution or interace.

The dirt is generally held to a dirty surface by a thin film of an oil or grease. When it is treated with soap solution, the non-polar hydrocarbon chain of soap or detergent dissolves in oil or grease and the carboxylate part of the soap or the sulphonate group of the detergent is held by surrounding water (in fig. below). This lowers the surface tension between water and grease. As a result, a stable emulsion of oil in water is formed. When the surface or the cloth is mechanically scrubbed the loosened dirt particles are absorbed by colloidal soap particles and ultimately washed away by water. 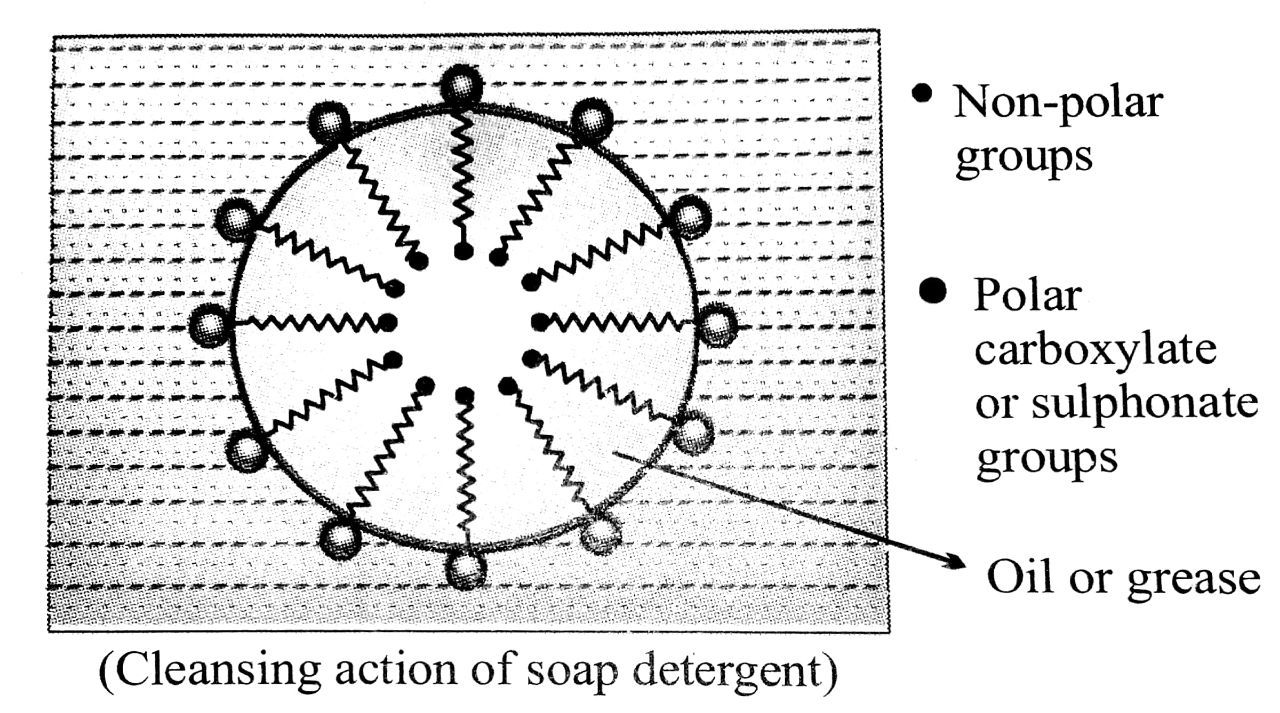 Ans. Detergents : As a result of high dissolving power, the naturally occuring water always contains dissolved materials, particularly ionic substances. Hard water contains certain metal ions, such as Ca2+ and Mg2+. These ions react with soap, (sodium salts of stearic and similar organic acids), to produce a curdy precipitate of calcium and magnesium salts. This precipitate adheres to clothing and blocks the ability of soaps to remove oil and grease from fabrics. Synthetic detergents are very similar to the salts of fatty acids found in soap, except that they are manufactured chemically from materials others than animal fats. Examples includes salts called sodium alkylbenzenesulphonates, which have the general structure.

Why are detergents preferred over soaps ?

Their advantage over natural soaps is that they work in had water. The anions of synthetic detergents don’t precipitate in the presence of Ca2+/Mg2, so their cleansing action is not affected by hard water.

Detergents are mainly classified into three categories namely anionic, cationic and non-ionic. Long chain alcohols are used in the manufacture of some of the synthetic anionic detergents. The long chain alcohols are treated with concentrated sulphuric acid to form alkyl hydrogen sulphates of high molecular mass and finally the alkyl sulphates are neutralized with alkali to form salts.

1. The anionic detergents are also effective in slightly acidic solution to form an alkyl hydrogen sulphate which is a soluble material, whereas the soaps react with the acidic solutions to form insoluble fatty acids.

2. A second type of detergents is the cationic detergents. These are mostly acetates or chlorides of quaternary amines. Being more expensive than the anionic detergents they find limited uses. Such detergents however, possess germicidal properties and are used quite extensively as germicides. Cetyltrimethylammonium chloride, is an example.

3. Some of the detergents are non-ionic, like the esters of high molecular mass formed by reactions between polyethylene glycol and stearic acid.