Q. 1. Alkyl Amines are stronger base than Ammonia.

Ans. The inductive effect of attached carbon chain to an amine will raise the energy of the lone pair or the nitrogen, because carbon. On amines will withdraw less electron density from an atom of interest that hydrogen (in ammonia). That explain why alkyl amines are stronger bases than ammonia.

Ans. Because, less electron is available in the nitrogen atom in C6H5NH2. It can easily dissociate to donate a proton, H+ by breaking – N – H bond in the amine group that attach to phenyl group. Hence ethylamine is more basic than aniline.

Ans. Alkylamines are stronger bases than ammonia and arylamines. This can be explained by the fact that alkyl groups are electron-releasing relative to hydrogen and thus provide greater electron availability at nitogen. On the other hand, arylamines are weaker than ammonia as the aromatic ring in these compounds is electron withdrawing as compared to hydrogen and thus reduces the electron density at nitrogen.

Ans. Oxygen is more electronegative than nitrogen and its atom is smaller than that of nitrogen. As a result, it pulls the bonding electrons of the O-H bond towards itself. This imparts acidic character (though very weak) to the alcoholic hydrogen. In the case of amines. N – H bond is not as polar as O -H bond. As a result, N atom tends to pick up a proton at its lone-pair of electrons rather than push the H-atom out as a proton.

Q. 6. Write IUPAC names of the following compounds and classify them into primary, secondary and tertiery amines. 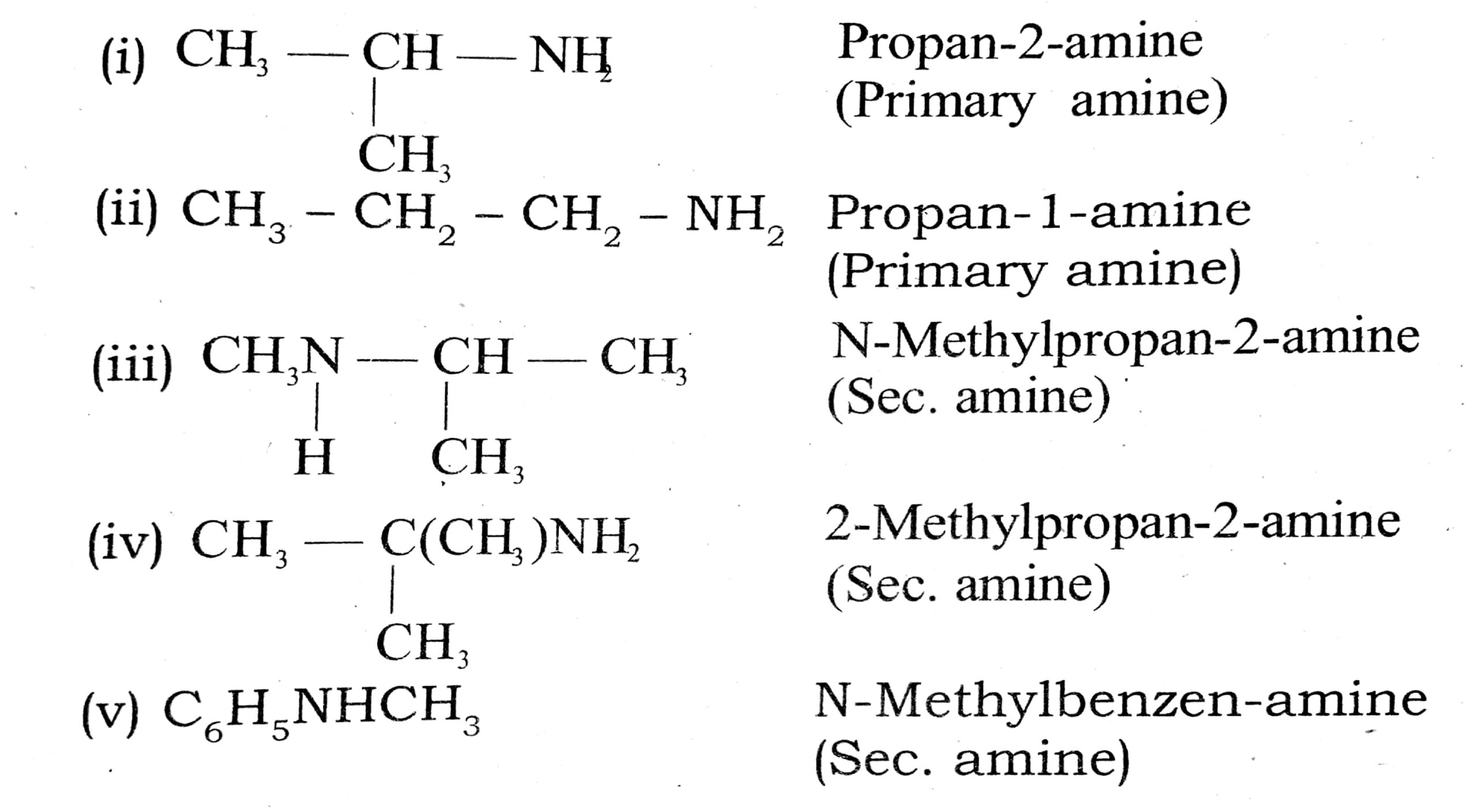 (i) In decreasing order of the pKb values :

(iv) In decreasing order of basic strength in gas phase

(i) In decreasing order of pkb values

Q. 8.Classify the following amines as primary, secondary or tertiery :

Ans. The reaction of of diazonium salts with phenols in basic medium (pH 9-10) and with amines in acidic medium (pH 4-5) to give corresponding azo (- N = N -) dyes is called coupling reaction.

Q. 11. What is the directive influence of the amino group in arylaminés ?

Ans. It is used in the manufacture of (i) dyes, (ii) Sulpha drugs.

Q. 13. Aniline gets coloured on standing in air for a long time. Why ?

Ans. Due to strong electron donating effect (+ R effect) of NH2 group, the electron density on the benzene ring increases. As a result, aniline is easily oxidized on standing in air for a long time to form coloured products.